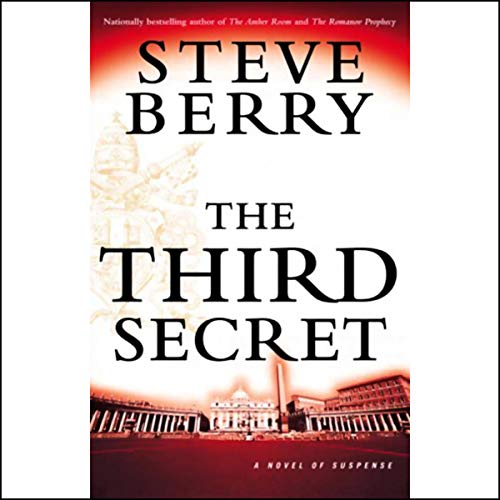 By: Steve Berry
Narrated by: Paul Michael
Try for £0.00

Fatima, Portugal, 1917: The Virgin Mary appears to three peasant children, sharing with them three secrets, two of which are soon revealed to the world. The third secret is sealed away in the Vatican, read only by popes, and not disclosed until the year 2000. When revealed, its quizzical tone and anticlimactic nature leave many faithful wondering if the church has truly unveiled all of the Virgin Mary's words or if a message far more important has been left in the shadows.

Vatican City, present day: Papal secretary Father Colin Michener is concerned for the Pope. Night after restless night, Pope Clement XV enters the Vatican's Riserva, the special archive open only to popes, where the church's most clandestine and controversial documents are stored. Though unsure of the details, Michener knows that the Pope's distress stems from the revelations of Fatima.

Equally concerned, but not out of any sense of compassion, is Alberto Cardinal Valendrea, the Vatican's Secretary of State. Valendrea desperately covets the papacy, having narrowly lost out to Clement at the last conclave. Now the Pope's interest in Fatima threatens to uncover a shocking ancient truth that Valendrea has kept to himself for many years.

When Pope Clement sends Michener to the Romanian highlands, then to a Bosnian holy site, in search of a priest, possibly one of the last people on Earth who knows Mary's true message, a perilous set of events unfolds. Michener finds himself embroiled in murder, suspicion, suicide, deceit, and his forbidden passion for a beloved woman. In a desperate search for answers, he travels to Pope Clement's birthplace in Germany, where he learns that the third secret of Fatima may dictate the very fate of the church, a fate now lying in Michener's own hands.

"Berry handles his thriller tradecraft skillfully: his descriptions are stellar, and of special interest, he offers a vivid re-creation of the majestic conclave, in which the College of Cardinals elects a new pope." (Booklist)

What listeners say about The Third Secret

Berry at his best again....

Would you listen to The Third Secret again? Why?

Definitely. Steve Berry authors some fantastic stories, and this is no exception. Great insight into life within the Vatican. I just love the early religious based conspiracy theories and their development through the subsequent years.

Some great portrayals of life in the Vatican.

It made me want to research the various alleged sightings of the Virgin Mary. The subject matter was very compelling

A very enjoyable conspiracy story, although by the time you get to the 'third secrect' the revalation is a bit too convienient. Would love to know how accurate the portrayl of the workings of vatican city is, but fascinating none the less.

I Loved this book, I am quite new to audible, but was desperate to listen at any opportunity. I found the insights to the Vatican fascinating..Loved it.

Catholics and those of Faith are likely to find The Third Secret as it is revealed in the novel to be sacrilegious. Despite this, the story itself by pace and tension was very good.

Would you try another book from Steve Berry and/or Paul Michael?

Would you ever listen to anything by Steve Berry again?

He did a fine job with the trash he was reading

The first half was promising until the story went off the rails having a Pope commit suicide because the Blessed Virgin Mary told him too, and then we find out the Church has been hiding the fact that the Virgin Mary has told the world through seers that homosexual sex is fine, abortion is fine, birth control is fine, priests should be having sex, etc. It is disgusting.

This one is ok

The writing was great and the constant interation between the characters was good. I thought the end was a bit of a letdown and Mr Berry was promoting his agenda. It is the book by him that I liked the least. The potenr\tial was great and then it just duds out

Was The Third Secret worth the listening time?

up until the end

I thoroughly enjoyed Berry's previous novel, The Romanov Prophecy, and so was very excited to see this release on Audible. Like his previous work, Berry puts his spin on a classic historical event with intrigue. As such, his work may remind readers of Dan Brown and such, but he truly is a unique author. He develops his character well, and the story is continually moving. My only critique of this novel was that the ending, that is the secret, seemed a bit convenient, and thus not credible. Oh well, the story is still great and definitely a must listen!

I'm not sure who would enjoy it more, since this kind of fiction appeals to people who want to be challenged to thing.
Others have covered the political nature of the book, and that's all fine and good. I am Catholic. I am a bit liberal on religious issues. I took no offense, and I didn't mind the preaching of the characters in the book, but I do think it was all a bit too unrealistic. I mean, I don't want to give too much away, but the Virgin Mary sounds an awful lot like Nancy Pelosi! My biggest problem with the storytelling was how completely goofball slow the main character is. I have twin 10-month-olds who are starting to pay attention to Yo Gabba Gabba, and they really spell things out for the kiddos. "This is what food is!" "You have two ears!" I felt like that was what the main character needed. So we're to believe that this highly educated papal secretary can't put even two puzzle pieces together? That's one thing that makes Dan Brown books better. The main character isn't a clueless schlub. He often brings new facts and wisdom to any fact-finding problem. In this case, though, the reader knows way too much more than the characters, and waiting for them to catch up is exhausting.

Has The Third Secret turned you off from other books in this genre?

What character would you cut from The Third Secret?

The main character, the papal secretary. Replace him with someone with a brain.

What was most disappointing about Steve Berry’s story?

His deep seeded hatred for the Roman Catholic Church.

Would you listen to another book narrated by Paul Michael?

What character would you cut from The Third Secret?

I would suggest dropping this title from Audible given the author's motivation. If this title was written about any other organized religion, we would loose another ambassador.

.........reading the author's personal religious beliefs disguisd as a suspense novel, be my guest. Not up to Dan Brown standards. Forgeting that the story line is very unbeleivable, I don't like my suspense novels being op-ed pieces. Sorry, I really was looking for another DaVinci code but got a 12 hour editorial instead and I probably agree wih most of what the author is preaching.

The priest takes a lover

Is it really plausible for a vatican based priest to lose faith as fast as the main character in this book? He is sent on a quest by a pope he respects and is his mentor and what does he do? He immediately includes his former lover. If you can set aside all common sense and just sit back and enjoy - it's a great summer read.

Marian visions, apocalyptic prophecies, the politics of the Papacy, and tangible proof for the existence of God all add up to a new summer thriller in the genre of Dan Brown. This is a story that will make red state Christians see red. It will give conservative Catholics and the Christian right something new to scream about and condemn. For the rest of us it is a fast paced, fun and thought provoking read.

This one is ok

The writing was great and the constant interation between the characters was good. I thought the end was a bit of a letdown and Mr Berry was promoting his agenda. It is the book by him that I liked the least. The potenr\tial was great and then it just duds out

Was The Third Secret worth the listening time?

up until the end

This was my first Steve Berry book. I found it very slow to get started, but once it did I really enjoyed it. I am presently listening to another of Steve's books and it seems to be a trend to start out slow. Worth a listen!