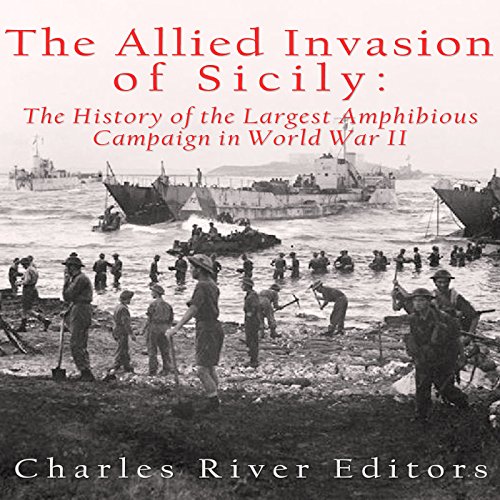 The Allied Invasion of Sicily

By: Charles River Editors
Narrated by: David Zarbock
Try for £0.00

The rugged island of Sicily, dominated in the east by the snow-crowned eminence of the active volcano Mount Etna (which rises to a height of 11,000 feet), lies in the ocean just off the "toe" of the "boot" of Italy. This spectacular setting witnessed one of 1943's pivotal battles as the theater of Allied operations shifted from North Africa to Europe - Operation Husky, a mixed victory wresting control of Sicily from the Axis. The action also caused Benito Mussolini's downfall, his imprisonment, and subsequent dramatic rescue by the scar-faced Otto Skorzeny - removing significant portions of Italy from the fascist camp but nevertheless failing to prevent a long and costly Italian campaign. Germany's North African defeat opened up the possibility of taking the war in the west to the European continent for the first time since France's lightning conquest by the Wehrmacht in 1940. The British and Americans debated the merits of landing in France directly in 1943, but they ultimately opted against it. The Soviets railed at the Westerners as "bastards of allies" - conveniently forgetting that they aided and abetted Hitler's violent expansionism in eastern Europe for over a year, starting in 1939 - but a 1943 "D-Day" style landing in France might have proven a strategic and logistical impossibility. As it turned out, the lackluster Allied showing on Sicily and the escape of most of the island's garrison would encourage Hitler to alter his plans and defend Italy vigorously. With its rugged mountain ridges, deep valleys, and numerous rivers, Italy contained tens of thousands of natural defensive positions.

What listeners say about The Allied Invasion of Sicily

Better off with Siri

I’m sorry to say that the narration feels stilted and unnatural, rendering a fascinating piece if history frustrating to listen to...

This Audible file ends at Chapter 5 (leaving the final push to Messina out entirely- almost 1/4 of the total book.

Also, this narrator is pretty poor- mis-pronouncing words throughout (“accuring” vs. “accruing” and “omniously” instead of “ominously” to name a couple of the more annoying ones).