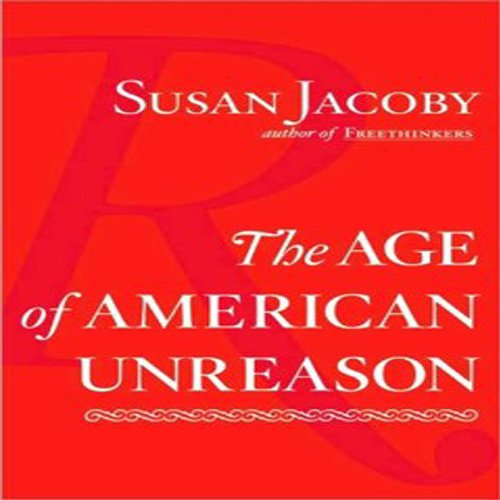 The Age of American Unreason

By: Susan Jacoby
Narrated by: Cassandra Campbell
Try for £0.00

Combining historical analysis with contemporary observation, Susan Jacoby dissects a new American cultural phenomenon - one that is at odds with our heritage of Enlightenment reason and with modern, secular knowledge and science. With mordant wit, Jacoby surveys an antirationalist landscape extending from pop culture to a pseudo-intellectual universe of "junk thought".

Disdain for logic and evidence defines a pervasive malaise fostered by the mass media, triumphalist religious fundamentalism, mediocre public education, a dearth of fair-minded public intellectuals on the right and the left, and, above all, a lazy and credulous public.

Jacoby offers an unsparing indictment of the American addiction to infotainment - from television to the Web - and cites this toxic dependency as the major element distinguishing our current age of unreason from earlier outbreaks of American anti-intellectualism and antirationalism.

With reading on the decline and scientific and historical illiteracy on the rise, an increasingly ignorant public square is dominated by debased media-driven language and received opinion.

At this critical political juncture, nothing could be more important than recognizing the "overarching crisis of memory and knowledge" described in this impassioned, tough-minded book, which challenges Americans to face the painful truth about what the flights from reason has cost us as individuals and as a nation.

What listeners say about The Age of American Unreason

Susan Jacoby's book is intelligent, thought-provoking, and worthy of anyone's time. However, the reader, Cassandra Campbell, was the worst possible choice to narrate this text, because she is unable to pronounce many, many names, as well as ordinary words. She is a perfect parody of everything Jacoby is trying to say, albeit the irony was surely not intended. To cite just one of her many gaffes, at once point she pronounces the name "Kristol," referring to Irving Kristol, as "ChrysTAL," as in the alcoholic beverage. This very good book deserves to be recorded again by someone better educated than this reader. Listen to the book if you have a strong tolerance for the ignorant.

Interesting, but explanation by redescription

So, what did I learn from this book?

1) A lot of facts about stuff that has happened in America. Interesting enough.

2) I have heard a defense of middle-brow morals from the late 50s and early 60s which was pretty compelling (although, it is not coincidental these are the morals with which Jacoby was raised).

3) That the Beatles aren't as good as Chopin (for which there is never a cogent argument besides that "it's obvious" or "Paul Simon doesn't think he's a poet").

4) And that TV is evil and has ruined our society (maybe to some extent, but is that really explaining anything? The question is why has it made us anti-intellectual vs. the Europeans).

I would have to say the anti-Beatles argument really sums up the weak points of this book. While its strengths are in its recitation of the intellectual history of America, its weaknesses are that it usually just hinges on, "well, come on, the Beatles are pop music, not as good as classical, come on!" It's not particularly moving as an argument, frankly.

That Jacoby can never separate her own personal tastes for the intellectual life (NPR, Russian Literature and wine and cheese) from her story about why America has been dumbed down to an almost comical level is a true shame. Because even though the topic could be a fascinating explanation of what's gone wrong with American minds, the book reads more like a personal indictment of things Jacoby doesn't like. Right-wing neocons? Yup she doesn't like 'em. Academic politics? She doesn't like 'em (and boy does she go on about it!). Pop culture? She doesn't like it.

In sum, it's very well read and very interesting, but never goes beneath a surface level of vitriol against the intellectual life to which Jacoby clearly aspires.

that I would love to meet Susan Jacoby in person

I started this book thinking that I made a mistake in reading this one. The political leanings of the book seemed to be far to left for me. After a short time I realized that there is a little bit in this book for everybody to love and hate. Susan is left on social and political issues. I do believe that she gave very fair treatment to issues and, for the most part, she did not let her politics get in the way.

Susan covers a very large breadth of issues and she covers those issues deeply enough that the reader understands the issue and her point of view. She also makes an honest effort to represent issues from both sides to offer an intelligent argument. On occasion she simply fails, but when we talk about W. Bush how could we be expected not to chuckle over his knuckleheaded blunders with the English language. I want to reject her argument in these occasions, but I just in good conscience can’t.

Susan dedicates a lot of text to the general dumbing down of Americans. She talks about how many ways our society has deluded our educational system and expectations for our children. She offers a myriad of ways this dumbing down happens and how it manifests itself in a number of ways. She attacks the school system, she attacks the mainstream media. Susan gives well-rounded and insightful input. Susan introduced me to several new subjects including “chicklit” that I have never heard of.

I want to dislike this book and Susan’s politics. After finishing the book I simply can’t dislike the book, Susan’s politics or her. In fact she may have offered the smartest, well-conceived and intelligently articulated arguments for her beliefs that I have heard. She has given me ample reason to reassess my thoughts on several subjects and I find that I would love to meet her in person. I can think of no one else that I would like to engage on the topics listed in this book.

This is a wonderful book about American anti-intellectualism, but as often seems to be the case, the reader is a problem. Particularly for a book about the decline of learning and respect for erudition in America, it is important that the reader make the effort to learn unfamiliar words in preparation for recording. The sort of person likely to read this book is also likely to be jarred by the many mispronunciations: William Shirer's last name contains a long "I," Lord Elgin's a hard "g," Alfred Kazin's is pronounced "KAY-zin," not "kazz'n," there is no "n" in the final syllable of "pundit," and Oscar Wilde wrote "The Ballad of Reading Gaol," which is not, in fact, a misprint for "goal." These are but a few of the errors I have heard without yet completing the first half of the audiobook. There is a certain irony in a book by the brilliant Susan Jacoby being butchered thus, more or less making the very point of which she writes.

Literary education is unquestionably different today than when Ms. Jacoby graduated from college but different is neither good nor bad; i.e. literary education from Tolstoy, Dostoevsky, Faulkner, Charlotte Bronte, Pearl Buck and other literary giants is still being consumed by the public. New authors like Katherine Stockett, Salman Rushdie, Yann Martel, Rebecca Newberger Goldstein, or Aravind Adiga, are among many newer intellectual writers. The medium may be different but the message is the same (after all, Jacoby’s book is available through audio books and e books). To suggest that the classics are not being read, understood, or appreciated today is a distortion of reality. How many literary themes have been replayed on the stage and screen? Where did the playwright or filmmaker get his or her idea?

Who would argue that science is not advancing? The intellectual advance of quantum mechanics, cosmology, and the science of man is astounding. Philosophy is grounded on advances in Science; with continued research there will be future philosophical intellectuals like Plato, Spinoza, and William James; in fact, they are probably here now but not with history’s perspective. The frightful truth of 21st century is that there is so much knowledge available that the biggest threat to intellectualism is knowing less and less about more and more.

Susan Jacoby is a highly sought after writer and speaker. One admires her reputation as a liberal but liberality is not a license to write junk thought.

Great book - must read for all College students

I bought is book - read it then bought the audio version to listen to it again during my commute, which prompted me to re-read the book again. Great work by Ms Jacoby. I recommend this book very highly. However, the narration is marred by a few very gross and obvious pronunciation errors which reinforces the author's case for the dumbing down of America. btw, the admin building in UC Berkeley, Sproul Hall is pronounce as "sprowl", to ryhme with the barn bird "owl."

there is truth to the premises but very biased

Pseudointellect masquerading as the moral authority and gatekeeper for what does and does not hold intellectual value. Standard boomer luddite moral elitism that devolves into political hackery. Ironically lectures the unfortunate plebeians on the correct usage of soldier while failing to understand the differences between a soldier, marine, airman, and seaman, and correct usage of the word troop.

Arrogance and Opinion without Substance

I am pretty reliably liberal in my views and a firm believer in hard science over opinion. That being said, this is a book of pure opinion. Jacoby spends much of this book insulting those that might otherwise agree with her and preaching to the converted. I'm forcing myself to finish, but she doesn't have any of the academic credentials to back up some of her analysis and falls into the same traps that she rails against in this book. Its not her atheism that turns me off, I was able to digest Yuval Noah Harari's Sapiens without any problem. I wanted to agree with her on many points, but I couldn't get past her arrogance and opinions passed off as analysis. There are plenty of other books out there that treat this information with an even hand. The War on Science by Shawn Otto was a much better read.

This book isn't bad, though it's marred by factual errors (John Paul II succeeding Paul VI, for example). But the narrator is awful. Anyone who narrates a book largely about intellectual concepts ought to learn how to pronounce them. Among the atrocities were "Aesthetic Communism" and "Cell Stem Research."