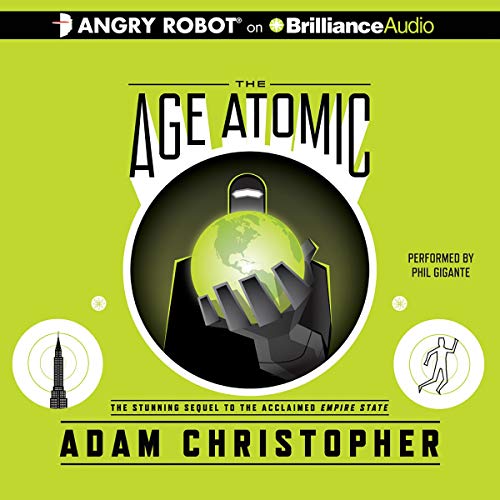 The Fissure connecting the alternate New York to its counterpart has vanished, plunging the city into a deep freeze. The people are demanding a return to Prohibition and rationing as energy supplies dwindle.

Meanwhile, in the real 1954 New York, the political dynamic has changed. Nimrod finds his department subsumed by a radical new group, Atoms For Peace, led by the mysterious Evelyn McHale. Their goal is simple: total conquest - or destruction - of the Empire State.

Adam Christopher returns with the thermonuclear sequel to Empire State - the superhero-noir fantasy thriller set in the other New York.

"A noir, Philip K Dick-ish science fiction superhero story…a novel of surreal resonances, things that are like other things, plot turns that hearken to other plot turns. It’s often fascinating, as captivating as a kaleidoscope." (Cory Doctorow)
"Truly original." ( Eric Brown, The Guardian)

What listeners say about The Age Atomic

Fun, but not as much as the first.

This is a fun sequel to Empire State. It just kind of feels like it's missing something that the first book had. It's by no means bad, just shadowed by it's predecessor.