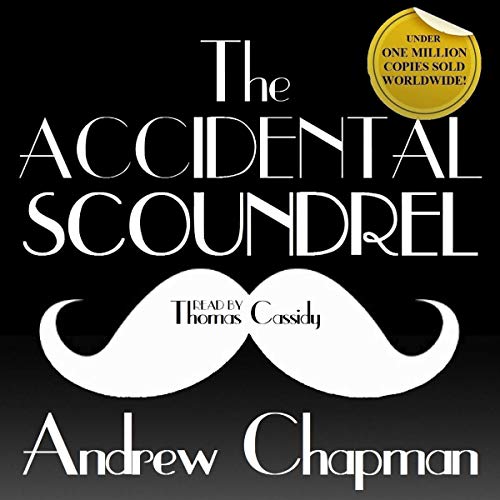 By: Andrew Chapman
Narrated by: Thomas Cassidy
Try for £0.00

A group of elderly and bored aristocrats have taken to stealing rare and priceless items to pass the time. A young man named Richard gets swept up in their world when he gets engaged to the daughter of the dangerously unpredictable Lord Rochdale. Although Richard is not particularly comfortable with theft, or much of the roguish behavior that goes with it, he must prove to Rochdale that he has scoundrel potential in order to marry his daughter and, more importantly, stay alive.

With the help of a disgruntled horse and a genius street urchin Richard haphazardly stumbles his way through Rochdale’s trials and not only survives but gains the respect (although he’s not entirely sure how) of Lord Rochdale and his elite group of scoundrels. Now all he has to do is steal a priceless bottle of whiskey.

"Do we have a new Wodehouse?" (Robert Wingfield, The INCA Project)

What listeners say about The Accidental Scoundrel

I began this book with the expectation that it would be a light-hearted easy to listen to and humourous book. I wasn't wrong.

It is very silly, silly in a good way. There is a scene with a golf ball which really gave me a clue as to how silly this book would turn out to be.

The story centres around Richard who is set to marry into the family of a land owning Lord of the Manor type named Rochdale. Rochdale is not your typical member of the aristocracy but a scoundrel and quite possibly a psychopath and it would seem that membership of this particular family comes with some conditions. This book explains those conditions and Richard tells the story about he became an accidental scoundrel.

It really is an easy book to listen to and I popped in and out of it whilst driving and doing housework in a few days; it's short enough to get through in a day if you would like and Thomas Cassidy does a fantastic job at narrating, not taking himself too seriously with the voices and accents and there was one point in the book which just happened to be a sex scene that literally brought tears of laughter to my eyes.

** Potential spoiler ahead, if you don't want a spoiler just go and buy it, it's worth the listen **


I do like myself a heist story and ideally I would have liked more time dedicated to the actual heist part of the book. I was imagining a bumbling posh English version of Oceans 11, I don't suppose it was far off, but it was a very short heist.

There's the slightest inkling of a sequel and I hope that there is one, a stag do which is also a heist perhaps!?

If this is ever made into a film I would like more emphasis placed on the robbery itself. Perhaps if it is televised Rochdale could be played by John Cleese and Richard by Darren Boyd.

Overall I really enjoyed this and will be giving Chapman's 'Tripping the Night Fantastic' a go next.

Humor is difficult to sustain in a book and "The Accidental Scoundrel" suffers that same fate. However, when it is funny it hits the mark but there are also times when the humor misses that same mark. Overall, the humor is well done and adds to the storyline rather than detracts.

My complaint about this audio book is the narration. The characterizations were, at times, indecipherable from one another leaving me totally confused as to who was speaking. Not enough differentiation in the voices. I also found the inconsistent use of sound effects off-putting. I don't recall another audio book that used sound effects and if I had a vote in the matter I'd vote "No". In the end, the narration negatively impacted what could have been a much more pleasant listening experience.

I thoroughly enjoyed this book, It made laugh quite a bit. It starts of weird but then you start to understand what is going then, the fun begins. The narrator really brought this book to life.
I was given this free review copy audio book at my request and have voluntarily left this review

I enjoy an over-the-top British comedy romp and this certainly fits the bill. The characters were engaging and the humor hit the spot with a continued undercurrent of looniness punctuated by some genuinely laugh-out-loud moments. Not quite as as on-target as various Jeeves and Wooster outings, but right along those lines and great for a light listen when you want something fun after a tiring week.

This book was so funny I was laughing out loud in my doctors office! Lunacy!Yes,it is full of it. A crazy father,ditzy daughter,dickensian wafe and a horse that 'speaks' a cool languange to the main character just keep popping up and the zany antics just keep coming.All of this ,and the guy just wants to marry the daughter. I really have no idea why.lol Thomas Cassidy was an extraordinary narrator.His voices were wonderful! I was given this free review copy audiobook at my request and have voluntarily left this review.'

This author has a very distinct style... this is the second book I've listened to of his and there's an air of mild insanity to his books. This book blends a mixture of Ocean's 11 style heist with over the top characters, and a very whimsical story. It's a great change of pace from any other books I've listened to and I really enjoyed it. I don't think I could listen to these all the time, but a new one once a year is something I'd look into.

What you will do for love

You will find this is a funny and entertaining story about the trouble aristocrats can get into to amuse themselves. Richard is Natalie’s boyfriend. She brings him to her family estate to meet her father and to tell him of her wedding plans. Unbeknownst to Richard the asking of her hand in marriage has elements of the middle ages. He must complete a task before he receives the approval of her father and uncles.

Natalie’s father and his four friends (the uncles) formed a club that does various things all of which are illegal. If Richard wants to be part of Natalie’s family, he must come on board with the illegal activities and participate. Thus, began the helter skelter ways in which Richard completes his task while not sacrificing his principles.

Richard is lucky enough to meet Tommy, a young vagrant delinquent who has superb IT skills. He eases the path for him to accomplish his tasks.

From eating and drinking to playing golf all are considered competitive opportunities for Natalie’s father, Rochdale, to highlight his superiority over Richard. After Rochdale introduced Richard’s head to the toilet in a fit of rage, Richard is happy to let him win.

I enjoyed the "color- as in color commentary" in the terms of sound that accompanies some of the action, i.e. you hear them chumping on their food as they eat and the smack of flesh as Natalie and Richard make love etc. I would enjoy read another book in the series to see what the old coots get up to doing.

Funny, not by accident

Full disclosure: Received this book for free in exchange for an honest review.

This book is filled with peculiar characters and bizarre situations. The main character Richard is engaged and needs to get the approval of his fiance's family. Turns out that her family is rich and her dad is eccentric, and so are the other members of her "family". Turns out the fiance has an extended family. Funny antics ensue, with some over the top situations.
Overall, I enjoyed this book and would recommend it to others who are looking for a laugh. There are some non-kid friendly instances. So, listen and judge for yourself.
The narrator did a good job, but there was few instances where I was confused who was speaking and had to wait to hear the text identifying who spoke.
There are some complaints about the sound effects, but I feel they helped in some instances and distracted in others.

Can Andrew tell me bedtime stories?

The characters in this book are nutty and lovable. It’s not easy writing over the top characters without coming off sounding ridiculous, but the author does it like a professional. Natalie’s dad and his cronies are hilarious and makes for a lot of LOL moments. I must warn you though do not read this book or listen to it rather while waiting in a public place, you will be looked at like something is wrong with you because you will not be able to stop laughing. I will be anxiously waiting for the next book from Andrew Chatman. As he is my new favorite author. He reminds me of why I love British comedies. I have no warnings except for maybe there is slight violence, but I think of stuff like that bother you do you wouldn’t be reading great books like this! Because in this book you will get violence with a little giggle or gmaybe a big giggle, did I mention how funny the book is?
When I got the code for this book for free I thought it wouldn’t be that good, but as you can see I was wrong it was great. I would gladly pay just to keep the book in my library to read in the future. If you like British comedies you must get this book or if you just like comedy in general you must get this book. If you don’t like comedy and you will! I love it or did I say that already!

Overall I really enjoyed the story, it took me a bit to get into it but by the time we get to the wallet and ring I was all in and could not wait to see how it was going to end. I look forward to more.

At the time of this review, audible still did not have chapter titles for this book.

Note this book was provided for free, however, this is my honest thoughts and review of the book.

Absolutely nutty! Basically a quest to prove his worthiness to marry the daughter of a pickled peer, it is a spoof in the same inane manner as Flashman. Very few of the characters are not wacky and the laughs never stop! Excellent read!
I have no idea how Thomas Cassidy maintained the narrator equivalent of a straight face! And he really adds to the hilarity.
I won this audiobook in a giveaway and just HAD to share a review! I win!