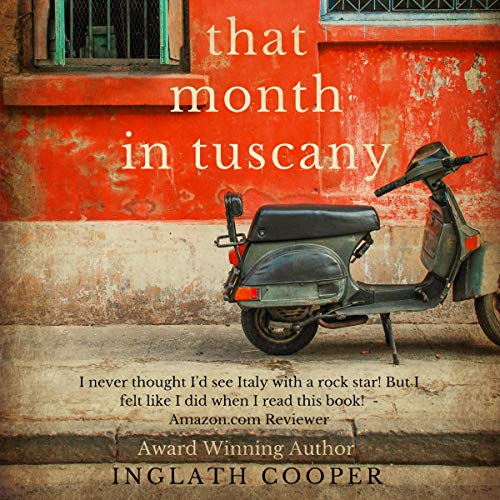 That Month in Tuscany

That Month in Tuscany....

Ren Sawyer and Lizzy Harper live completely different lives. He's a rock star with a secret he can no longer live with. She's a regular person whose husband stood her up for a long-planned anniversary trip.

On a flight across the Atlantic headed for Italy, a drunken pity party and untimely turbulence literally drop Lizzy into Ren's lap. It is the last thing she can imagine ever happening to someone like her. But despite their surface differences, they discover an undeniable pull between them. A pull that leads them both to remember who they had once been before letting themselves be changed by a life they had each chosen.

Exploring the streets of Florence and the hills of Tuscany together - two people with seemingly nothing in common - changes them both forever. And what they find in each other is something that might just heal them both.

What listeners say about That Month in Tuscany

This was good for a drive

I listened to this while I was driving from London to Wrexham and then back again. For an audiobook to listen to in the car it was pretty good. Some of the narration could have been better, but the story was charming and it ended well. Although had I not been caught in traffic and listening with a good friend some of the melodrama in dialogue might have been annoying rather than hilarious. Anyway, my advice is to listen with a friend in the car and it's good.

Narration by Lauren Ezzo dripping with sickening sweetness to the point I could barely listen to it, but I was held captive on a long car ride and no other selections to listen to. I eventually found myself caught up in the story and some of the time actually seemed not to hear the voice; then she would over whine that melodrama and I’d gag again.

You won’t be able to put this book down! The characterization is near-perfect. This is the first time I’ve read the author, Inglath Cooper; but it will not be the last. The story was excellent. The narration was fabulous! A must read!!!

Enjoyed the storyline and the chemistry between Ren and Lizzy. I only wished the narrative part felt more natural and a bit less "read". However, after several chapters you get use to it and start to get into the characters, and story. It has the perfect ending.

One you can’t put down

Thoroughly enjoyed this book. Surprisingly poignant. A bit predictable but that was ok. would definitely recommend.

Loved the story!
The narrator who voiced Lizzy could have been less stiff and more believable.

The first impression: I don’t like the voice of the first narrator, is like listen Siri on iPhone, no feelings, accent or emotions. It bother me, i can’t concentrate in the book because her voice. I repeat the chapter to listen again the story. Will se in the next ones.

The MOST annoying narration I have ever heard

I can't even focus on the book because of the female narrator's inflections and cadence are all wrong. She sounds bored while reading, so how am I suppose to like this book? Huge thumbs down.

Blugh. This is a horrid unimaginative story performed by underpaid robot clowns. I was prepared for light and fluffy, but this was just an eye-roll wrapped in embarrassing dialogue.

There are some surprises in this book and it kept me listening. I normally listen to mysteries but this was a nice easy love story for an enjoyable change.