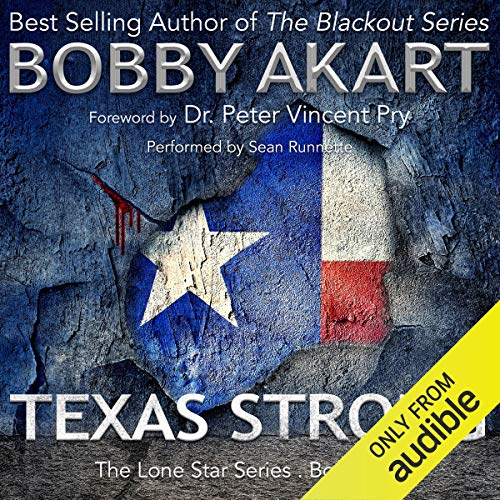 By: Bobby Akart
Narrated by: Sean Runnette
Try for £0.00

Texas free! Texas strong!
A battle cry rallied a new nation.
But a storm is brewing which could challenge the Texans' way of life.
A warning is issued...you better leave well enough alone because you don't know nothin' about Texas strong.

Nuclear armageddon struck the United States and Texas received a glancing blow. The Armstrong family is reunited and now they must turn their attention to the threats which exist all around them.

Through prudent planning, Texas protected its power grid from the impact of the devastating electromagnetic pulse attack, but was it enough? The new nation is but an island surrounded by chaos and devastation. Food is running out for its nearly 30 million citizens while millions of refugees press against the border fencing erected to keep them out.

The pressure is on and an unexpected catalyst is about to create havoc for all Texans, including the Armstrong Ranch.

The Lone Star series is a thought-provoking, gut-wrenching look into a postapocalyptic country devastated by nuclear destruction.

Would you be ready to make the tough decisions to protect your family and survive?

What listeners say about Texas Strong

I feel like a proud Texan after reading this book. I'm not even American. I'm becoming a true Bobby A fan.

wow. just wow. I think I can relate to this so well because my hometown is at the center of a lot of the activity in this book. I know the streets, monuments, buildings, etc. I feel like I am apart of what's going on. I cant wait for the next one!

Love this series the Armstrong’s Family, Faith, Friendship and resilience a true Texas Family.
A must read!

The first four books makes a big deal of how all modern vehicles fail after the EMP fries the electronics. . All of a sudden in this book terrorists and mercenaries can stroll through new car dealerships and steal trucks with at will. There’s no attempt to explain what magic tool they have to overcome the fried electronics. They just stick the key in the ignition and drive off. After making such a big deal about the impacts of the EMP devastating American life, this is a VERY disappointing oversight by the author. It almost made me stop listening.

it's not as action packed at his other books and the pace is very slow. but it's still a good book to listen too.

Unbelievably it just keeps getting better!

Unbelievably it just keeps getting better!
I shouldn’t say that because it IS believable and expected.
Bobby Akart has a real winner in this series.

Damn, this series is good!

Texas is going through growing pains but as is usual with politics, what is good for the people they represent, the poiticians will fight, argue, pout and toss verbal grenades at each other. As if that is not enough, Halloway and his North Korean team are wreching havoc as they cross an unguarded part of Texas border, killing and taking what they want as they advance toward the most vulnerable part of the new nation that is Texas. (possible spoilers)
The Armstrong ranch is also facing their own trouble not just from out of country refugees but Texans as well as the food crisis grows.
President Burnette has allowed the UN to bring in humanitarian aide not just in Texas as well as but to use a small area airport as staging ground for them to send humanitarian aid further north. But of course they are merely a Trojan Horse to bring in dissidents to further create trouble.
Duncan has also come to the realization that his part in this entire thing is not over and he might himself be a target playing his own cards close to the vest.
As always, assaination from many directions is faced by several of the protagonist unbeknown to them.
As danger from all sides comes at the Armstrongs, they are now more fiercely dedicated to each other, protecting their property from any and all intruders. But will the strong bond they have for each other be enough to get them through what is coming their way? Only time will tell. One thing is sure , they will meet it head on...
As I stated before, this saga is great not only for its eye opening topic but because it is so well written that no gratuitous violence or sex is written into the story line or even needed. This is about family and the love, unity and respect they have for each other, something sorely lacking in these sad and difficult times.
This is a must read series for those that follow politics, expecially in this daay of volitil rehtoric between both parties and their followers.

I've listened to the Blackout Series and the first books in this series. I think Akart is a reasonably good writer. The Lone Star Series contains increasingly violent acts. The descriptions are increasingly graphic. I get that in a situation like the one in which this story takes place people will commit terrible acts of violence. I just don't want to read it. It's too much for me to want to finish the series.

I was so excited that they went back for Red Rover. I can breathe easy now. You had me worried their for a minute

This book is ok the story is ok the narrator is no good. I can hear the air sucking through his teeth.