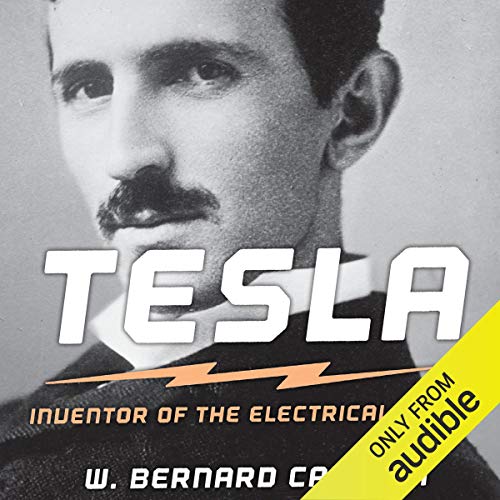 By: W. Bernard Carlson
Narrated by: Allan Robertson
Try for £0.00

Nikola Tesla was a major contributor to the electrical revolution that transformed daily life at the turn of the 20th century. His inventions, patents, and theoretical work formed the basis of modern AC electricity, and contributed to the development of radio and television. Like his competitor Thomas Edison, Tesla was one of America's first celebrity scientists, enjoying the company of New York high society and dazzling the likes of Mark Twain with his electrical demonstrations. An astute self-promoter and gifted showman, he cultivated a public image of the eccentric genius. Even at the end of his life when he was living in poverty, Tesla still attracted reporters to his annual birthday interview, regaling them with claims that he had invented a particle-beam weapon capable of bringing down enemy aircraft.

Plenty of biographies glamorize Tesla and his eccentricities, but until now none has carefully examined what, how, and why he invented. In this groundbreaking book, W. Bernard Carlson demystifies the legendary inventor, placing him within the cultural and technological context of his time, and focusing on his inventions themselves as well as the creation and maintenance of his celebrity. Drawing on original documents from Tesla's private and public life, Carlson shows how he was an "idealist" inventor who sought the perfect experimental realization of a great idea or principle, and who skillfully sold his inventions to the public through mythmaking and illusion.

This major biography sheds new light on Tesla's visionary approach to invention and the business strategies behind his most important technological breakthroughs.

What listeners say about Tesla

Interesting, lots of things I did not know

Would you recommend Tesla to your friends? Why or why not?

Yes. Very interesting story about a "mad scientist", who suffered from tunnel vision and a very large ego. After his initial success with electromagnetics, it then got be be like the hammer - it sees everything as a nail, and Tesla becomes the hammer where he sees the solution to everything as one of his inventions or possible inventions.

A detailed examination of Tesla's work

I have read everything I can get my hands on about Tesla. I first learned of him during my course work at University. The basic unit of magnetic field is named after him. He developed alternating current, radio transmission and FM radio, wireless transmission of electrical power; he was ahead of Roentgen in the invention of photographic process of producing x-ray. He is known for the Tesla coil, induction motor, rotary transformers, high frequency alternators, the Tesla oscillator and many more. This is the newest biographical book on Tesla. The book covers both the biographical life of Tesla but goes into greater detail about the technical aspects of his invention and theoretical work. In fact it could be titled the history of electricity in the 19th and early 20th century. The author takes the reader into the scientific mindset of the 19th century and compares it today. The book is objective and even handed about Tesla’s accomplishments and life. I find this objectivity critical to any book about Tesla as in recent decades he has been mythologized in the public imagination. The author goes into great detail about the various ways inventions are created by inventors and why some need marketing to create a demand and others do not. Professor Carlson also explained that Tesla like many inventors needed a business person to keep him focus on feasible inventions and provided the financial backing and marketing. Unfortunately for Tesla the key business man in his life died when Tesla was at his peak and Tesla was never able to replace him. But the patent attorney stayed with him for years. I enjoyed reading this book; it gave me an excellent understanding of Tesla’s inventions and theories. A caution to those readers that are less technically inclined this book is heavy into technical detail but written in an understanding way. I particularly enjoyed the last two chapters of the book, I thought Carlson did an excellent job of summarizing all the data he presented and his notes by various books about Tesla are helpful. Tesla’s work has pioneered the way for many inventions in the past few decades that we take for granted. He was a man ahead of his time. Allan Robertson did an excellent job in narrating the book.

Anyone curious about why and how such genius ended up on the obscure part of history should read this book It tells of his genius, his flaws, and how he got bypassed by his obsession with charging the earth electrically to provide free electricity to all.

well, Duh! Nicolas Tesla. What a character. What a performer. What a mind.

I found the presentation somewhat soporific, a problem since I do most of my listening while driving. But the story and the man, Tesla, more than make up for it to make this a must read from my point of view.

Great to hear the technical details!

If you like technology and enjoy figuring out what Teslas technical accomplishments were, this is probably the best Tesla biography on the market! Others focus too much on the social aspects of his life and on the mythology that has ben spun around his person. This one does cover the social part too, but covers the science and technology really well also.

This scientific book about Nikola Tesla Narrated by Allan Robinson and written by W. Bernard Carlson is a great overview of Tesla, his inventions and his humanity. This book explores his ideas, his successes and his failures. It reads like a History Channel Documentary, but Allan Robinsos's narration makes it an enjoyable listen. I would suggest you have Internet access when listening so you can see pictures of Tesla's inventions to give you visual of what you hearing about.
I found out many things I did not know about Tesla.  I was surprised that Tesla traveled as much as he did as travel was difficult in early 1900's. This story is not a puff piece but looks at Tesla's flaws and success equally drawing no conclusions but presenting the facts.
If you are a history buff this book is a great listen.
I purchased this book for my own entertainment.

I enjoyed the thoughtful and well-researched look at historical character that I thought I already knew.

The true master of electricity. Genius inventor of most electrical applications and products used today. A genius who put people first.

What made the experience of listening to Tesla the most enjoyable?

The style of writing was easy to follow (not as detailed as Israel ' s book on Edison) and the presentation was easy to listen to and enjoyable.

What other book might you compare Tesla to and why?

Israel ' s book on Edison. Carlson focused more on what Tesla was like as a person; explaining that his pursuit of allusion was his downfall. If Charles Peck hadn't died in 1890 the Tesla story might have been a lot different. He had a sense of the market and seemed to be able to get Tesla focused and keep him focused until he had a commercially viable product.
Edison on the other hand was a virtual engineering machine. The two men were quite different. Israel seemed to struggle with covering all of Edison ' s work; so much so that you don't get inside the man as much as Carlson ' s presentation of Tesla. I think I would like to read a biography of Edison written by Carlson.
I have yet to read Jill Jones book "Empires of Light". Maybe she provides the comparison that I am looking for.

Have you listened to any of Allan Robertson’s other performances before? How does this one compare?

Tesla: What happened? The Shocking Truth!

I definitely recommend this book. Carlson does a great job explaining the people who invent and what brings them success and failure.

This is a good biography that doesn't shy away from technical descriptions. Only note is that for those looking for information about the Tesla/Edison rivalry, look elsewhere, this doesn't really go into that part of his life much

The amount of details was outstanding and the story was engaging. I learned quite a bit.

nice history about an amazing period

the history about the surroundings of Tesla, his contemporary colleagues, his privilege of living on the same times as volt, hertz... some parts of the fierce race for tame electricity, power... great lessons about the difference between intelligent people with teeth for business and the tech genius like Tesla. Some parts are heavy talking about the technical side. in general great reading

about the audiobook, please make sure that the index gets the tittles, there is no chapter with their title