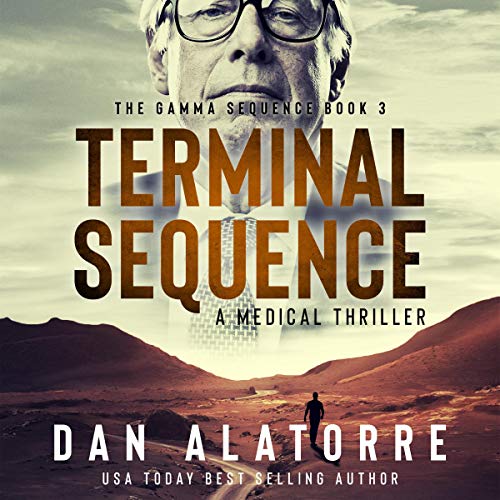 By: Dan Alatorre
Narrated by: Skye Stafford
Try for £0.00

Forget everything you thought you knew!

While preparing for his final round of life-saving treatments, detective Hank DeShear agrees to work with intelligence agent Jaden Trinn and a ruthless killer known as "The Greyhound" to shut down the remaining legs of Angelus Genetics’ illegal, death-plagued genetic engineering program.

But the company Dr. Hauser founded plans to continue operating, buying political protection, and stopping any would-be attackers in the harshest, most permanent ways possible. When the next generation of Hauser-created child prodigies learns of the founder’s true plans, a sinister reality is revealed that no one could possibly have envisioned.

As their team members are systematically hunted down and murdered, DeShear and Trinn wonder if either of them will survive long enough to finally end Hauser’s death-plagued program - or if it will end them.

Fans of Robin Cook and Michael Crichton will love this fast-paced series, especially the finale!

What listeners say about Terminal Sequence

I was sucked into this world right away. I haven’t read the first or second book but it was easy to follow along and see what was happening and who was who. I do feel like it would be even more rewarding to read the others first. But this is written where there’s no problem. Also, I don’t think it would spoil anything for the previous novels. Dr Hauser was something else. He reminds me of Hitler and ruling by fear. But he also had medical science and technology on his side. So scary. I read a review that said this wasn’t really a medical thriller but sci-fi. It’s both. I’m not sure how this reviewer didn’t think it was medical. Probably because it wasn’t the main focus as in hospital setting and patients.

It’s what could happen if too much knowledge and power were to get into the wrong hands. Mainly with genetics. Even though the drones at Hauser’s facility were like robots in actions, I felt like they were created from DNA and genetics. I haven’t read the previous books so maybe they explain more. Either way, any kind of control an evil scientist can get on someone would be scary. It reminded me of Hitler and what he could’ve done with cloning. It’s not too far fetched as a reviewer said. I’m a clinical scientist in a small hospital lab. I’ve worked in microbiology with the crazy bacteria and what it can do and how it mutates to overcome antibiotics thrown at it. Anything is possible. The only part that seemed hard to fathom was dr Hauser being able to be on the computer screen while his body was on life support on a slab.

Anyway, this book is fast moving and action is a mile a minute. I found myself holding my breath. I listened to the audiobook to and from work. The characters were so well written. It was hard to tell who to trust and who was bad. Anyone could be playing a role. I loved Keeper 27 and Constantine. And of course, Deshear. Not sure about spelling of his name. The narrator was amazing! One of the best I’ve heard. If you like action, you will love this.