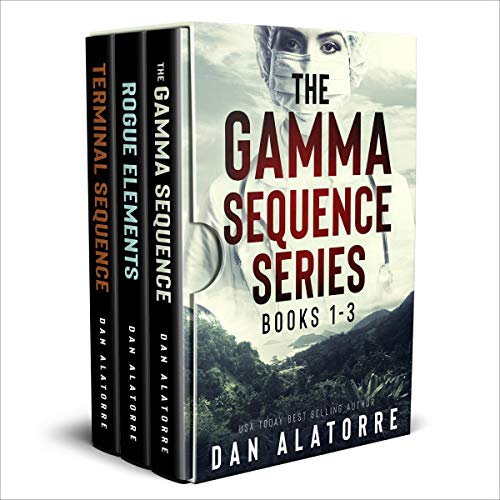 Books one to three of the amazing The Gamma Sequence series. Includes bonus material and behind-the-scenes info.

All three thrilling novels in this set are complete and unabridged.

Geneticist Lanaya Kim must do what authorities haven’t - tie together the “accidental” deaths of several prominent scientists around the country to show they were actually murdered.

Over the past two years, geneticists have died in what appear to be accidents, but Lanaya knows otherwise. If she tells her secrets to the authorities, she risks becoming a suspect or revealing herself to the killer and becoming an open target.

Hiring private investigator Hamilton DeShear may help her expose the truth, but time is running out. The murders are happening faster, and Lanaya’s name may be next on the killer’s list. But when Lanaya and DeShear start probing, what they discover is far more horrifying than anyone could ever have imagined.

After completing the biggest case of his career, private detective Hank DeShear returns home to start treatment for a disabling genetic condition that could end his life, but he learns his partner on the prior case has just been murdered.

Was he wrong to conclude the secretive killer known as The Greyhound had declared a truce? Or have disciples of The Greyhound surfaced to carry on with the murders?

The child prodigy of Hauser's genetic schemes learns of the reality, while Trinn and DeShear team up to stop it all.

What listeners say about The Gamma Sequence Series