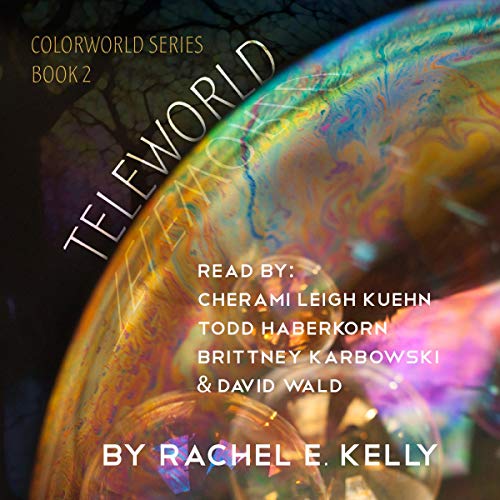 In this second installment of the Colorworld series: After a month of living a semi-normal life with her condition, Wen would rather not think about scary things like the fact that her ability became more powerful all on its own. Or that Louise is still roaming free. Or that she's about to be married to Gabriel and she has no idea how they'll manage being unable to touch each other. But the questions won't leave her alone and she's desperate for answers.

Wen believes those answers begin with Subject Number Three, the only person known to have survived touching her lethal skin. When her Uncle Robert finally locates the woman, Wen is sure that an end to her problems is within her grasp.

Now, hope for a cure to Wen's condition is crumbling, Kaylen is missing, and a horrifying accident with her brother leaves Wen desperate and terrified.

Just when she thinks she can't take much more, Gabriel, the one person Wen thought she could count on, suddenly becomes the one person she fears the most.

What listeners say about Teleworld

Slow, but with glimpses of awesomeness.

Despite the author’s not so subtle insistence in the epilogue, I can’t help but try to interpret what the metaphors of the story mean to her. I suppose she’s right, that the more important question is what the story means to me, but it’s clear that writing this story was a deeply cathartic process for the author. In that sense I spent most of the book feeling like a spectator to the author’s artistic outlet rather than an audience to the story being told. She spent more time analyzing the psychology of the characters, and perhaps by extension her own life (or mine), than the time devoted to actually forwarding the plot. So while we now certainly understand these characters a lot better, by the end of the book, the plot hasn’t moved very far.

All that being said, when we are not slogging through one of the countless replays of the same fight between Wendy and Gabriel, the chapters where the plot makes some forward movement are quite engaging. Some of the scenes where Kaylen gets to flex her telekinetic muscles are pretty cool. The performances by the narrators are top notch, particularly Cherami Leigh Kuehn, who reads like a veteran audiobook narrator. So while I can’t say this was my favorite audiobook of the year, it definitely left me wanting more, and that’s a very good sign. I’m looking forward to hearing what happens in the next installment, Lumaworld!

This is such a great series. The voice acting was great as always, Cherami, Todd, Brittney and David do such a good job of drawing you in and giving so much emotion. Love this series so much. I've listened to Teleworld so many times.

Having read book 2 of the Colorworld series I loved all the action, drama and dialog that was involved. :) David Wald was meant to play mike and I’m officially team Mike. ;) The producers for this series did an amazing job in choosing their cast. If you haven’t read Teleworld what are you waiting for? :)

Colorworld was amazing and Teleworld made me fall deeper into the series. The characters that I loved now have more depth than before and I can’t wait to see how the rest of their stories unfold. The performance by the narrators was amazing and kept me listening for hours on end. I can’t wait to listen to the next book in Kelly’s series!

ITS A WHOLE MOVIE

Best Audiobook ever 😍 I loved Kaylens heart and spirit, and how she is portrayed! I loved the first book but Teleworlds story TOOK me there! I felt like I was watching a movie while listening. Rachel Kelly does an amazing job at being descriptive and very thorough in what is happening and I LOVE IT! I enjoyed the book but listening is a whole other story! Kudos to the VA'S!

The Colorworld series is the first audiobook I have ever listened too. It took me hardly 48 hours to finish it. Teleworld was JUST AS AMAZING! All of the narration by all of the different voice actors was so spot on. I seriously can not wait for the next one!