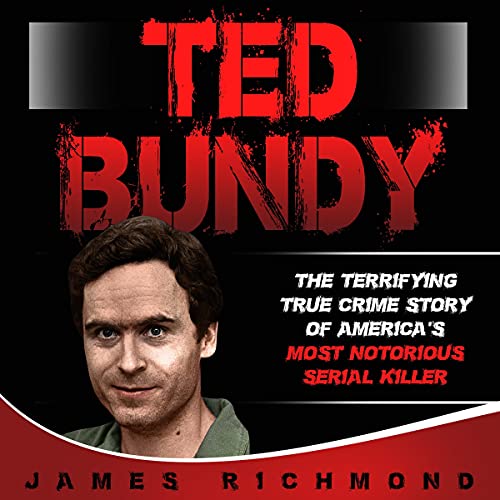 Delve into a chilling darkness of the serial killer world and explore it through the eyes of victims, detectives, witnesses, and other people who were involved and experience the whole new dimension of true-crime storytelling.

Described as "a sadistic sociopath who took pleasure from another human's pain and the control he had over his victims, to the point of death, and even after", Ted Bundy was a nightmare in disguise.

This story brings you all "whens", "wheres", "hows", and "whys", so delve deep inside the events that brought shock and horror to the American people. This true crime story's exquisite and fiction-like narrative will show you a whole new angle of Ted Bundy's deviousness and ruthlessness.

Beware, this story is not for faint hearts. You may forget for a moment that this story is true - that makes it even more terrifying. The facts will shock you, terrify you, and leave you with a feeling of uneasiness and dread. Perfect listen for true crime aficionados and murderinos.

Are you prepared for the horror that awaits? Tread carefully and take a listen - if you dare!

Scroll up and get the audiobook now!

What listeners say about Ted Bundy

I thought I had already seen/heard/read all there was about Ted Bundy that is out there. There are details and perspectives in this audiobook that I had never heard before. You get a look at the stories from different perspectives than the usual presentation. I heard several details I had never heard before. The narrator did a great job as well. So glad I listened to this one!

This audiobook is such an interesting and descriptive book! I have read the book myself, but the audiobook narration really brings it to life. I enjoyed the detailed storyline, outlining Ted Bundy’s childhood and adulthood prior to the serial killings, as well as the murders and trials. You get the entire story and history from a fairly short audiobook, just shy of 4 hours. I would even recommend this audiobook for listeners who have already read the story or watched documentaries about the Ted Bundy story. Although the story itself is the same, the narrator navigates the life of Ted Bundy and his victims from a unique yet factual perspective. The author allocates enough time to the victims’ stories and does not rush through the story focusing solely on their deaths. I think this is important because oftentimes, authors focus more on the killer and the act of killing but negate to tell the victims’ story. This book is a nice balance of both. Moreover, the author also captures perspectives from the victims, detectives, witnesses, and other people involved in the Ted Bundy story, making it a riveting, comprehensive storyline covering the motives, methods, locations, and timelines.

This audiobook is easy to follow and great for days where you need an escape from reality or for the days when you need a bit of entertainment while doing housework. Lastly, I enjoyed the slightly British accent the narrator brought to the story. It added to the anticipation and intrigue during the lead-up to the murders.

This is an excellent book! If you love true crime, you will love this! I have watched other documentaries about Ted Bundy and I still learned a lot from this. The narration is clear and easy to understand and really draws you into the story. Would definitely read more from this author!

If you love serial killers and horror, this is a must read! We’ve all seen the documentaries but this book truly brings the devilish Ted Bundy to life! I had goose bumps within minutes, lasting the entire book, as James Richmond brutally describes the terrifying scenes. I was mutually in love and horrified. 10/10 would recommend!

This book was very well-written. It summarizes the life of serial killer Ted Bundy and tells about his notorious crimes. It depicts Bundy as the infamous, charismatic psychopath and gives factual accounts without being gory. This book read like a mini documentary, keeping the reader’s interest while staying informative. The narrative demonstrates an excellent example of a killer’s habits and escalation of behaviors. A common take-away is that Bundy’s target demographic was young females between their teens and late twenties, often using his charisma against his victims’ compassion; however, what could be even more pronounced is the importance of women (realistically, all people) to be aware of their surroundings, slow to trust strangers, and avoid potentially dangerous situations. This book is a good, informative read, which could prove beneficial to many in such fields as psychology, criminal justice, and history.

Ted Bundy, the Terrifying True Crime Story of America’s Most Notorious Serial Killer, by James Richmond, tells the story of Ted Bundy with amazing detail and emotion. Unlike other biographies and stories of Theodore Robert Bundy’s life, this book takes you to a place where it all began and delivers the intense story of the prolific serial killer, from the beginnings of his childhood up to his date of electrocution in 1989. You will be entranced in the evolution of the young man who succumbed to his need to possess women and become one of the most silent and dangerous monsters of all time.
Described as tall, blue-eyed, and handsome, Ted Bundy was able to compartmentalize his growing need to possess women. “By killing them, you possess them,” he said. Bundy used his lethal charm and what may have seemed like normal daily activities, to persuade young women into believing his ruses. He was educated, patient, and planned his attacks, sometimes for years.
One of the most intriguing parts of this book is how you can feel what the victims may have felt. The author tells the story in a unique and emotional narrative. You can connect with their last moments as you hear the logical, but terrifying, possibility of the thoughts they may have had in the final moments from both sides: the predator, Ted Bundy, and his victim’s. For the true-crime fanatic, this is a fascinating book!