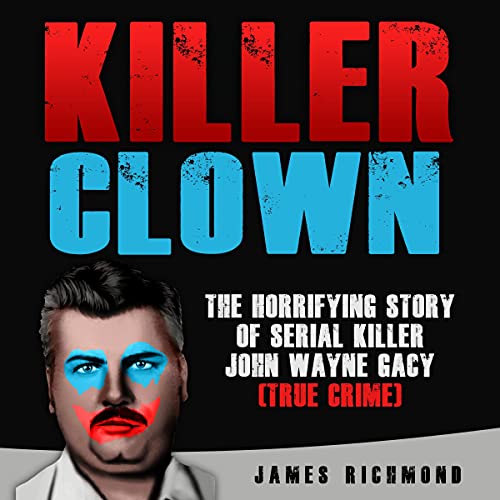 Widely held as one of the worst serial killers America has ever seen, John Wayne Gacy led a seemingly normal life - but behind his apparently friendly persona and his charity work as a clown to entertain sick kids, he held a dark secret.

Now, this harrowing book reveals the disturbing true story behind Gacy’s killing spree, revealing in stark detail the horrific acts that made him one of America’s worst serial killers. Detailing Gacy’s personal life, his most notable murders, and the investigation that led to his eventual capture and the gruesome discoveries made beneath his floorboards, Killer Clown: The Horrifying Story of Serial Killer John Wayne Gacy offers a detailed and thorough glimpse into the twisted mind of the murderer who preyed on young men and claimed over thirty-three lives.

Perfect for the morbidly curious, fans of true crime, or anyone fascinated by serial killers, this book explores how Gacy got away with murder for so many years, and how his neighbours were painfully unaware of the countless bodies hidden just feet beneath his home. From his earliest murders to his confession, conviction, and eventual execution, Killer Clown provides a comprehensive account of Gacy’s life and crimes.

Scroll up, and grab your copy today to discover the harrowing true story of John Wayne Gacy.

What listeners say about Killer Clown

Master of deceit and disguise

The author of Killer Clown, James Richmond, has become one of my favorite true-crime writers! He has a unique talent for taking information from police investigations and interviews with the killer and creating the story of the serial killer’s life. This book goes into specific details of not only John Wayne Gacy but, you learn about his family and how Gacy’s life and abusive environment became a catalyst of his transformation.
Was it a combination of a head injury, his violent father, and other family members with criminal backgrounds that pushed Gacy into a life of murder and rape? Gacy seemed to be innocent and quiet when he was young. As an adult, he was smart and well-liked to those who knew him. Below that friendly surface, he was manipulative and cunning. As the story is told, John Wayne Gacy even held grand parties in his home with his recent kill lying under the house in a crawl space. He dressed up as a cop or “Pogo the Clown” to approach his victims and lure them in.
Did you know that John Wayne Gacy was named after the movie star? Richmond explores both the victim’s feelings and last moments as well as the killer’s emotions as he writes this detailed story of John Wayne Gacy. The author provides a lot of rich details and you may have to listen twice to catch all the information that is told in this book. I would highly recommend Killer Clown, the Horrifying Story of Serial Killer John Wayne Gacy to all true-crime fanatics!

I loved listening to this book! It was very easy to follow along with and really enjoyable! I have watched other documentaries about John Wayne Gacy and I still learned new information after listening to this audio book. Definitely would recommend to all who love true crime podcasts or dateline!

James Richmond is officially a favorite.

Warning, this book is graphic! If you love horror, James Richmond is the author you want! His vivid descriptions are terrifying in the best way. Tour through the home and world of John Wayne Gacy. You truly feel like you’re getting a sneak peak into this horrific murders life. You can practically smell the victims through the floorboards! Sick and twisted. Every crime-lovers dream novel.

Gacy is the most evil!

As an avid fan of serial killer media, I was excited about this one. It did not disappoint! This goes into a LOT of detail on Gacy’s horrific crimes. The narration was also very good. Chilling. If you haven’t (or even if you have) researched much about Gacy, this is a must-listen!

Horrifying but a must-read!

This is such a horrifying, yet intriguing rendition of the John Wayne Gacy story. James Richmond does a wonderful job, yet again, at capturing the true essence of both the killer’s and his victims’ minds. The author makes it easy for you to imagine what each character is feeling, making the story come to life. He also describes the room, the victim, and the murder acts with such detail that you can picture it in your mind. The narrator also adds a sense of fear through his calm yet commanding voice.

I appreciated that the author writes the story out of order. He starts with the end in mind and works backwards in a sense. This layout works especially well for this story because you have to navigate through unexpected twists and turns. This is just further proof that the author perfectly matches his writing style to the specific story.

In regards to the story itself, it is so flabbergasting that it would be hard to believe if it wasn’t true. John Wayne Gacy is yet another killer that flew under police radar despite having significant run ins with law enforcement. These stories always make me wonder how many lives would have been saved if someone would have paid attention. It’s unfortunate but the author does the story justice.

This is the perfect audiobook for anyone interested in true crime or the John Wayne Gacy. I would definitely recommend it!