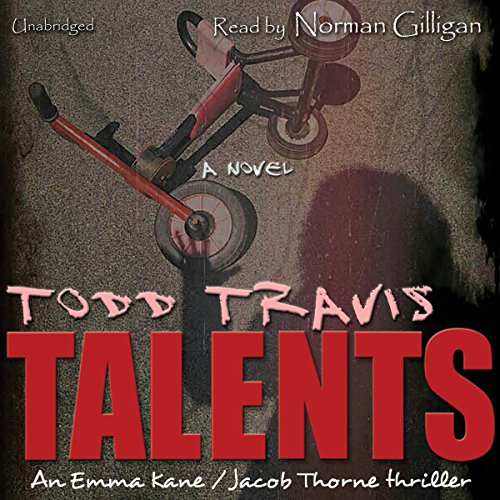 In 1989, a school bus filled with young children disappears. It drove into a tunnel, a tunnel with no exits, and did not drive out. Witnesses saw the bus go in. No one saw it come out. It vanished into thin air as a community panics. Everyone panics. Everyone except for a 24-year-old college dropout named Jacob Thorne.

In 2004, three people are brutally murdered, two of them in a sealed panic room, a room locked from the inside. The only trace evidence is a single hair from the suspect. A suspect that has been dead for three months, killed by the same people who were just murdered in the panic room. Everyone is convinced a ghost has come back from the grave to avenge a murder. Everyone, that is, except for a young DC homicide detective suffering from PTSD named Emma Kane.

To be a profiler, it takes more than just research and hard work. It takes more than simply brains. It takes...talent. And you need to have it from the very beginning. Talents - An Emma Kane/Jacob Thorne thriller. An origin story of two very unique people.

What listeners say about Talents

Didn’t care too much for this book

I don’t know if I liked this story. It felt like two different stories meshed into one book. I didn’t particularly care for the authors message to readers at the beginning. His way of stating that using profanity and law enforcement goes hand in hand are not correct. I’m a female in law enforcement and all my female coworkers don’t curse the way Kane does or condone the language. Although both stories were good on their own I still think that it could’ve been foreshadowed throughout the previous stories or made completely into two separate books. I guess I really didn’t need a back story because both characters Thorne and Kane acted exactly the same. We really didn’t see a growth in either characters. I thought Thorne was a lot more interesting than Kane. And that Kane picked more than a bad habit from his father.