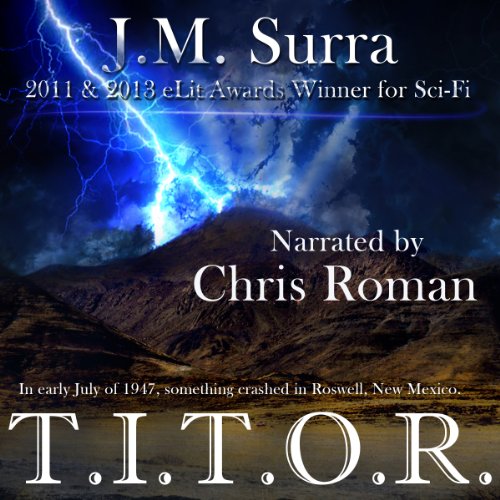 In early July of 1947, something crashes in Roswell, New Mexico. The military claims it's a weather balloon. Witnesses insist they've seen bodies of aliens, and the wreckage of a UFO.

Sixty-eight years pass. On September 15th, 2015, an incident involving the Roswell wreckage escalates into a massive nuclear exchange between Russia and the United States, leaving five billion dead. Another eighty-three years have passed. It's 2098, and project T.I.T.O.R. is a reality. Hop machines are created by top quantum physicists Ephraim Caine, Jeff Waldron, and Rose Rios. These complex crafts are designed to do one thing: penetrate the time barrier. Time is short. Earth; wounded, post-apocalyptic, with her dwindling resources on the verge of exhaustion, can barely support life. Project T.I.T.O.R. has a singular focus: to send hop crews back through time, and find some way to stop the nuclear exchange. To save the Earth.

After more than two hundred routine missions, one goes awry, and the hop machine and its crew tumble from the sky. Hop 206 crashes near Roswell, New Mexico, in early July of 1947. In a mind-bending twist of fate, they've inadvertently set off a series of events that, if unchecked, will culminate in a nuclear war, and the slow, agonizing death of their living planet.

They've triggered the precise scenario T.I.T.O.R. was meant to preclude. With everything stacked against them, can they succeed in changing history? Or will time prevail, blocking every effort to change it, and eliminating humanity in the process?

The mother of all abstract conspiracy stories.

Unlikely, but i certainly have researched John Titor since listening to this book.

If you’ve listened to books by J.M. Surra before, how does this one compare?

There don't appear to be any other in the Audible line up, otherwise I would.

Have you listened to any of Chris Roman’s other performances before? How does this one compare?

It doesn't appear that I have, but I will certainly look for his work going forward. An excellent performance.

To be honest, it did make me research TITOR , quantum theory , etc. Not so much emotional, but an intellectual response.

I could have done without the author's somewhat self referential comments before and the after the book. However, the concept, and it's vary nuances, are fascinating, and certainly draw the listener in. I do recommend this offering for a variety of reasons.

Interesting story about the Rosewell crash and the creation of Area 51. Unique spin on the supposed UFO crash occurring 50 plus years ago and the government coverup. The author finds a creative way to weave the past and the future into a cohesive story. Loved the narrator's range and choice of character voices.

Where does T.I.T.O.R. rank among all the audiobooks you’ve listened to so far?

This is such an interesting and intriguing audio book. The storyline is so great,and I honestly believe that Chris Roman is hands down THE BEST reader ever!.

What was one of the most memorable moments of T.I.T.O.R.?

The ending where the general and his troops watch the missiles coming overhead knowing they're dying. The whole book is very memorable, but the part I listed was the one that gave me chills and I was somewhat stunned momentarily.

Which character – as performed by Chris Roman – was your favorite?

I can't pick just o e, I really can't. The storyline a d the reader made ALL the characters memorable and multidimensional.

YES!!! But I wasn't able to,a!though I did stay way into the night listening even though I knew full well I'd not be any good at work the next day!. Ahhh...the things a great book/ reader will cause one to to! :-). !!

Just that THIS is a book I'd HIGHLY recommend to any one interested in these sorts of subjects.

This is YA sci fi

This story was probably not intentionally written as a YA book but the result is the same. Viewed in that light it was pretty good. Clearly this is not a hard sci-fi techno thriller space opera.
This book is safe for your YA. No cussing or sex although in one scene some toes are smashed with a hammer.
This is not my usual fare so I’ll go back to some hard sci fi.