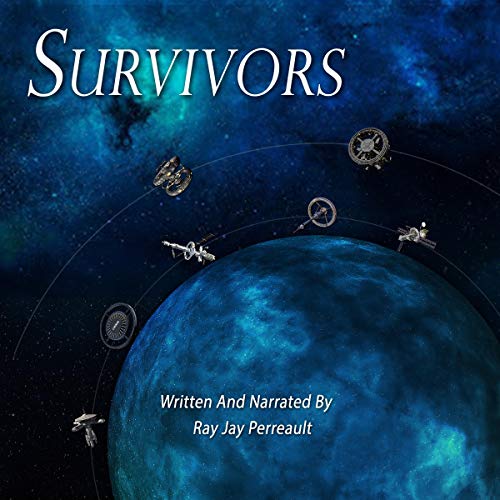 This novel is an expansion of the novella Red Dots.

Humans were running out of time. Earth was no longer a place where they could survive. Earth's leaders started a bold plan sending a spaceship named Deep Space One to a possible new home for the surviving humans. While they waited for a message that the target planet was suitable, all of Earth’s resources were committed to building a huge fleet of transports to take them to their new home.

Deep Space One was on a one-way journey and suspicions formed in space and on the ground. The Salvation Corporation that was run by the President of Earth was building the fleet, but were they honest with the people who trusted them?

What listeners say about Survivors

Red Dots was a good short story. Actually it was one of my favorite stories written by Ray Jay Perreault.
Survivors is technically an expansion of Red Dots. I say technically because other than the basic concept this is a whole new story. Survivors by itself is a decent story. With some major editing it would be a whole lot shorter and a much better story.
How many ways are there to say that a military type “Captain” is important (at least to himself). Once you have all you can think of I am sure this story can give you a few more. All in one chapter. This appears to be Rays “go to” for expanding a story. He literally repeats himself. Repeatedly. Continuously. Often. And dare I say it… Repeatedly. Sometimes this repetition is the same idea stated a different way. There were several occasions in this story where the same sentence was repeated but with a word or two changed. I mean there were even times that I heard the same sentence repeated that was only different by a word or two. This is the kind of thing that happens when you edit your own work. It is very easy to know in your head what you are saying and not realize that it is not what is written on the page.

Also, Ray Jay Perrault is NOT a narrator. After the first couple of books he has read all of his works on Audible. This is not a good thing. He has major issues with cadence and pacing placing pauses where they do not belong and missing them where they do belong. Also his voice is not conducive to various characters.

I was given this free review copy audio book at my request and have voluntarily left this review. This review is my opinion and good bad or otherwise was not solicited.

Once you start listening there’s no way you can stop. You can feel the tension of what’s happening. The narrator definitely helps this happen.

Survivors suffers from a slow start with stilted and repetitive writing Also, Perrault is not an excellent narrator. However, he does write interesting stories. This one became more interesting and entertaining as it developed, but unfortunately ended just as it was peaking. Hopefully he will write a sequel to build on Survivors.