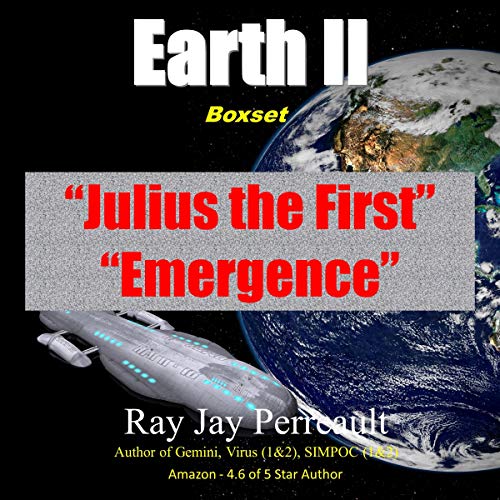 Earth II - Julius the First, the fifth book in the Virus/Earth II series

Earth has survived an alien virus in this post-apocalyptic story. The alien virus was used to cleanse the planet before harvesting, and the surviving humans were given thousands of spaceships and robots as war reparations. The few survivors must adapt to survive.

There is an unexplored galaxy beyond their solar system. They must be wary of both their neighbors and an evil computer named Julius. Julius was an intelligent computer unleashed during the viral attack. He was programmed to deal with the two threats to his existence, SIMPOC, another intelligent computer programmed to help humans, and the remaining humans. Joan Herl and her husband Tom commandeer an alien ship to follow Julius. Julius has stolen an alien ship seeking resources so that he can deal with SIMPOC and the survivors.

Julian knows that he must build up his arsenal so he can deal with the threats to his existence. He captures a very important human, but he doesn't know who he is!

The evil computer Julius has kidnapped Tom Herl, and his wife Joan doesn’t know his fate. Now that Earth’s survivors have been given thousands of robots and spaceships, they realize two things: first, they must prepare for Julius’ return, and second, they must find a way to exist with their celestial neighbors. There is conflict among their neighbors, and Earth can’t afford to be in the middle. They find themselves in a balancing act between the Terest and Izod, two civilizations that have a complex relationship and want Earth’s survivors to be on their side.

Good author but he should pay for a professional to do the narration of his books. I tried to like it but his job was just terrible. Finally switched to let Alexa finish reading thee books. The story itself is pretty good..