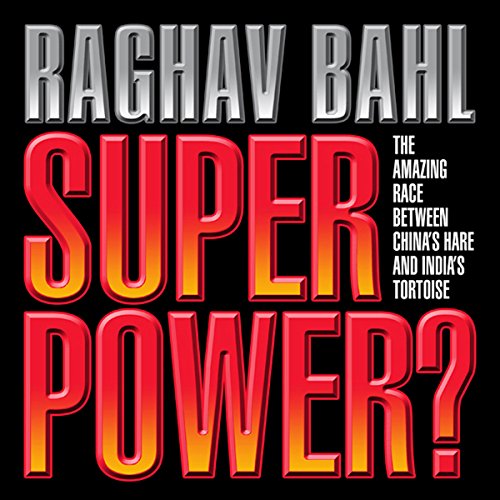 By: Raghav Bahl
Narrated by: Walter Dixon
Try for £0.00

Is India ready for superpower status or too far behind China to ever catch up? In his career as one of India's leading journalists and entrepreneurs, Raghav Bahl has often faced this question, and many others, from bewildered visitors.

Clearly there's a huge difference in how India and its arch-rival China work on the ground. China is spectacularly effective in building infrastructure and is now reinvesting almost half its GDP. Meanwhile, India is still a "promising" economy: more than half its GDP is consumed by its billion-plus people, yet India has some unique advantages: Half its population is under twenty-five, giving it a strong demographic edge; 350 million Indians understand English, making it the largest English-speaking country in the world; and it's the world's largest democracy. In the race to superpower status, who is more likely to win: China's hare or India's tortoise? Bahl argues that the winner might not be determined by who is investing more and growing faster today but by something more intangible: who has superior innovative skills and more entrepreneurial savvy. With insights into the two countries' histories, politics, economies and cultures, this well-written, fully documented, comprehensive account of the race to become the next global superpower is a must for anyone looking to understand China, India and the future of the world economy.

"Raghav Bahl's colorful, engaging audio book does his reader two invaluable services: It moves well beyond conventional wisdom to provide an insider's view of India's political complexities and reveals just how different China and India truly are." (Ian Bremmer, president, Eurasia Group, and author of The End of the Free Market)

What listeners say about Super Power