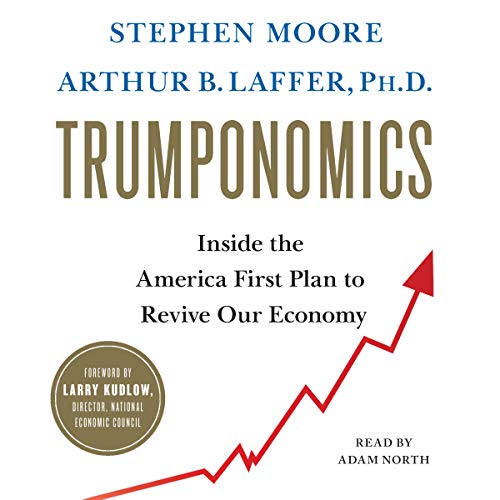 Inside the America First Plan to Revive Our Economy
By: Stephen Moore, Arthur B. Laffer
Narrated by: Adam North
Length: 8 hrs and 39 mins
Categories: Non-fiction, Economics
5 out of 5 stars 5.0 (1 rating)

By: Stephen Moore,Arthur B. Laffer
Narrated by: Adam North

Donald Trump promised the American people a transformative change in economic policy after eight years of stagnation under Obama. But he didn’t adopt a conventional left or right economic agenda. His is a new economic populism that combines some conventional Republican ideas - tax cuts, deregulation, more power to the states - with more traditional Democratic issues such as trade protectionism and infrastructure spending. It also mixes in important populist issues such as immigration reform, pressuring the Europeans to pay for more of their own defense, and keeping America first.

In Trumponomics, conservative economists Stephen Moore and Arthur B. Laffer offer a well-informed defense of the president's approach to trade, taxes, employment, infrastructure, and other economic policies. Moore and Laffer worked as senior economic advisors to Donald Trump in 2016. They traveled with him, frequently met with his political and economic teams, worked on his speeches, and represented him as surrogates. They are currently members of the Trump Advisory Council and still meet with him regularly. In Trumponomics, they offer an insider’s view on how Trump operates in public and behind closed doors, his priorities and passions, and his greatest attributes and liabilities.

Trump is betting his presidency that he can create an economic revival in America’s industrial heartland. Can he really bring jobs back to the Rust Belt? Can he cut taxes and bring the debt down? Above all, does he have the personal discipline, the vision, the right team, and the right strategy to pull off his ambitious economic goals? Moore and Laffer believe he can pull it off and that Trumponomics will usher in a new era of prosperity for all Americans.

Moore and Laffer are the best!

Very easy to understand explanation of why the economy was so anemic under Obama, and why it is so robust with Trump's policies. I am so thankful these guys were able to shape recent economic policy. I have been a fan of Laffer since I was in college. He has always embodied the positive Reagan message that individuals, when given the freedom to do so, will do more to make things better for themselves, and there fellow beings than can ever be achieved through coercion by a tyrannical dictator, or a well meaning democratic majority.

I wish Moore had made it to the Fed, he is right about deflation being a bigger threat to stable prices than inflation.

Insightful and transparent look into the Trump administration and their policies. Worth reading if you want to gain a better understanding of both free market economics and he rationale behind Trump's economic policies that have caused a major economic upturn in America

great story, highly recommended, I really enjoy and learned from every single chapter. A must read for those who love political macroeconomics Congrats!

Page turner... Steve Moore and Art Laffer, 2 of the nation's leading supply side economists provide a scintillating account of how they came to be architects of tax reform and deregulation under the current administration.

not proffesional book and misliding

Lays out the secrets to how Trump made the US boom

The policies beyond the media sound bites.

Very satisfying details of the formation of economic strategies from the campaign to mid 2018.

This includes where his famous Supply-Side advisors disagreed with Trump initially on issues like trade and tariffs, and how they resolved their differences.

All The Objectivity Of A Fox News Report

Despite being authored by two distinguished economists, the vast majority of this book is not an objective analysis of Trumponomics. Except for the last chapter dealing with Trump’s trade policies, this book is written with the objectivity of a Fox News report.
The authors thoroughly discuss Trump policies that have had a positive economic impact, but often ignore those that have had a negative impact. The book explains the positive impact that Trump energy policies have had on the income of farmers who lease their land to oil and gas drillers. Yet, the book ignores the decimation of our soy bean farmers by China’s retaliation to Trump’s tariffs.
The book extols the positive economic impact of Trump’s tax cuts, but provides no analysis of the degree to which those benefits are reduced by Trump’s tariffs.

Thanks for this clear and succinct document on Trump's concept of free trade. Free but Fair.