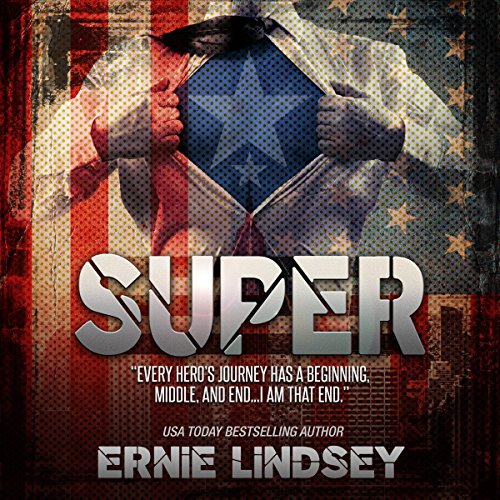 "Every hero's journey has a beginning, middle, and end...I am that end."

A world mourning a fallen superhero.

A president targeted for assassination.

A conspiracy that runs deeper than anyone suspects.

Leo Craft is the best at what he does; he assassinates superheroes, but only the ones who deserve it. Life is good, simple, until an ultra-secretive government agency hires Leo to execute two impossible tasks: eliminate the world's foremost superhero, Patriotman, and hunt down a fellow assassin whose target is the president of the United States.

When everyone wears a mask, trust is hard to come by - and even the elusive truth can be caught in a web of lies.

A novel in the vein of Garth Ennis's The Boys

What do you do when the good guys go bad? Who do you turn to? What options do you have? If Superman went psycho who would you call? How about a top secret set of special operatives whose sole mission is to take down "Heroes" who have gone rogue. Leo is one of those special operatives and he has just been handed the two toughest assignments he can imagine. First, he has to kill Patriotman, the world's most beloved hero, and then figure out which one of the other Super assassins is going to kill the president. The bad news, he never turns down an assignment. The worse news, he hasn't failed a mission yet. The worst news? He doesn't want to kill Patriotman. Before he knows how in over his head he is bullets are flying, friends are dying, and he is on the run seeking answers. Can he figure out who is behind this in time to save the president? Maybe, but that is as far as he can go, considering he's already killed Patriotman.

First, I want to talk about the cover. No one ever does that. This cover caught my eye right away, and it is pretty brilliant. It harkens back to a time when heroes would duck into phone booths, and a certain kryptonian would rip open his shirt to reveal his big ole S symbol. The stars are reminiscent of Captain America, but different enough to let you know this is a different hero altogether. I would actually use this as a poster on my wall.

Next,Paul Woodson's narration is as smooth as a glass of Lagavulin's 16-year Scotch after a rough day at the office. He totally sells himself as Leo, and plays the other characters like he was up for an Emmy. He fuels the story with emotion and suspense with just his voice, and he is so clear and crisp that he sounds like he is right next to you. I enjoyed his style of speaking, and felt that he really fit the story well. Good casting.

The story is told in a Tarantino style of flashbacks and present day bursts that works. I love stories like this, and get upset when people complain that it made the story hard to follow. All I can say is that if you can't follow along with a few flashbacks you then maybe you ought to stick with Dr. Suess books. Anyway, the mystery of who is out to kill the president rolls over poor Leo, and you see that while he is a top operative he is not exactly a detective. I like that. He is a trained killer, and while he is smart enough to put together puzzle pieces he generally doesn't know what box the piece he finds came in.

The writing is intense, and you will certainly feel the bullets zipping by, and there are at least one or two (or maybe more) twists that you will not see coming. The only thing is that you really don't have a well defined nemesis for Leo, and the story works BECAUSE of that fact. If you knew who the villain was then there would be no suspense, no mystery. You will really have no idea until the final chapter unveils who is causing all the problems in Leo's world. This is smart writing, because you know only as much as the character. Without some bad guy twirling his moustache telling you all of his plans you are in the same boat as our Super Assassin.

The story unfolds in a timely fashion, and does not drag or have any lulls, each scene pushes the story forward, and helps you understand a little more the further you go. Lindsey has crafted a compelling self contained story, and that is something I can really appreciate. We really don't need never ending series or trilogies when one book will do the job. A couple of side notes, Lindsey injects little nods to other heroes from the "big two" with a wink. I liked that he didn't play favorites. And, you might wonder just how a regular guy can go around whacking supers with impunity, but you soon find out, so don't sweat it. All things will be revealed.

This is an extremely fun, but also thought provoking book that kept me listening for the entirety of its run time. I'm willing to bet that you will be hooked before you know it and will not want to put it down! Even though I did receive a promo code for this review it in no way influenced my considerations of the material, and in fact, inspired me to be more honest. In fact, getting a code generally makes me harsher as a reviewer as I am more often concerned what someone like Me will decide based on my review.

Fast, fun, and well written with a few nice twists - and the narrator, Paul Woodson, was fantastic! You can always tell when the narrator is an actual -actor- Mr. Woodson's performance is spot-on and turns an already decent story into a wonderful listening experience!

Leo Craft assassinates superheroes in a world of good and bad supermen.   He is hired by the government to get rid of the bad ones, or the good one when they go bad.  Leo is unapologetic about his job.  He is good at it and it needs to get done.  You can’t have men and women with super powers going around perpetrating super crimes, after all.

Then Leo is hired by a secret government agency to assassinate the most beloved and honorable superhero in the world - Patriot Man - and his morals kick in.  Why and who would want to do such a terrible thing, the world needs Patriot Man and the good he does.  The deeper he digs into the assassination plot, the more people get killed and the more confused he gets.  The corruption seems to go all the way to the top – the president of the United States - and even he is not safe.

Written for lovers of comic books, superheroes and super villains, there are various nods to Superman, Batman, the Hulk and others.  It is a chaotic world of supers and those who want to eliminate them.  It would be a fun story, but its attempts at self-deprecating humor often fall flat.  The plot is overly complex and confusing, constantly introducing names the listener can’t remember or why they matter to the story.  We don't lean much about Patriot Man’s super powers are or what he has done that is so great for society.

Written in the first person, we are in Leo’s head throughout, where he constantly explains about who this person is or how he feels about that person.  It is claustrophobic, forcing the action when there is some and slowing the story when there isn’t.  Major plot twists come as explanation rather than unfolding events, killing almost all hope of suspense.  The listener wants to empathize with Leo, but never seems to get the chance.

The story is performed by Paul Woodson who does a very good job.  His voice has the sarcasm and energy the story should have.  His voice characterizations are good and easy to follow.  He is a good pick for the genre.

If you are a lover of superheroes and comic books you might give Super a try.  The action and cartoonish characters might be just what you’re looking for while you trudge through the confusing plot.  Other listeners should look elsewhere; there just isn’t enough to recommend this book.

It drug on and just didn't really work well.

I forced myself to finish it. it just seemed cliched, with an inner monologue that was trying to be funny but just didn't make it there.

Sometimes, being a hero is exhausting

Where does Super rank among all the audiobooks you’ve listened to so far?

I'd definitely give this an upper mid-list ranking, but only because of the story. The performance was spot on, and at times brilliant.

Unfortunately, as with most Ernie Lindsey books, he telegraphs the twist so far in advance it holds no weight. There's got to be a better way to do it.

What does Paul Woodson bring to the story that you wouldn’t experience if you just read the book?

Everything. The voice for Patriot Man was fantastic, the way he was able to get inside the head of him, and really "become" him in the book made what was a lackluster story into something that was wonderful to listen to.

There were quite a few fairly profound quips in the novel that make you stop and think about life and everything that goes with it. I wouldn't say I had an extreme reaction, but they were out there enough to stop and make you go hmmm.