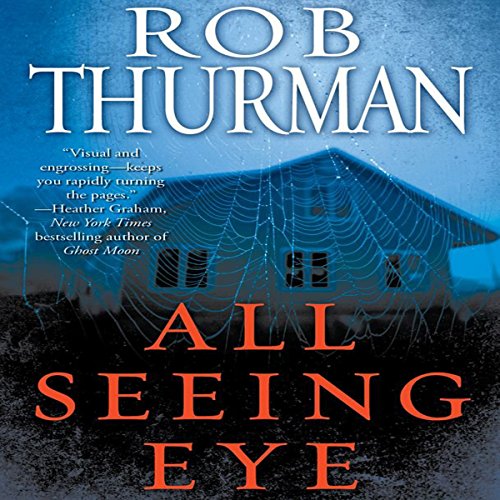 Rob Thurman’s edge-of-your-seat paranormal thriller centers on the clairvoyant Jackson Lee Eye, who discovers his "gift" as a young boy when he finds his murdered sister’s pink shoe and who seems content with living the rest of his life in relative obscurity; that is, until he’s unwillingly plunged into an investigation involving a surreptitious government program on out-of-body experiences.

Performer Jeff Hoyt is more than up to the task in embodying the jaded, foul-mouthed protagonist, and is particularly adept at capturing the witty, rapid-fire banter between Eye and his ex-friend’s brother Hector in this riveting listen.

Picking up a small, pink shoe from the grass forever changed young Jackson Lee’s life. Not only did its presence mean that his sister Tessa was dead - murdered and stuffed in the deep, black water of a narrow well - but the shoe itself told him so. Tessa’s death triggers an even more horrific family massacre that, combined with this new talent he neither wants nor can handle, throws Jack’s life into a tailspin. The years quickly take him from state homes to the streets to grifting in a seedy carnival, until he finally becomes the cynical All Seeing Eye, psychic-for-hire. At last, Jackson has left his troubled past behind and found a semblance of peace.

That is, until the government blackmails him. After Jackson is forced to help the military contain the aftermath of a bizarre experiment gone violently wrong, everything he knows about himself will change just as suddenly as it did with his little sister’s shoe.

And while change is constant...it’s never for the better.

What listeners say about All Seeing Eye

When his sister is found dead, Jack suddenly receives the power of a psychic. Years of isolation are shattered when he is drafted by the government to save a respected scientist.

The story got a bit daft from here, in that the scientist has discovered a way to travel through the ether, and can only be brought back from sites where horrendous murders have occurred! Jack's psychic powers are sought to deliver these sites and save the day.

Available since July in paperback, but I waited until this was available in Audible and I am glad I did. Hoyt seems an odd choice for the younger Jackson Lee, but it works as flashback once you get used to his style. And he does well with the range of voices, male and female.

The book hooks you from the start -- you feel for the anti-social, sarcastic psychic, Jackson Lee. The book could have been longer (ended too soon for me), but the ending leaves me believing this is only the beginning and we will see more of Jackson Lee, which is a good thing.

And now if all of the Cal Leandros series were available on Audible, I would be a very happy reader. Rob Thurman has a signature style of razor sharp sarcasm that plays well in audible format.

I drive around checking sites for my company so I listen to audiobooks all the time and this is by far my favorite I've listened to. I've listened to it 3 times now, it's the perfect reader for the story and the story is good.
I've turned a few of my friend on to this story and they loves it also.
it's like the writer wrote it for this narrator. It's perfect

This book was on sale so I bought it and I am glad I did. It was very good and I enjoyed it. It delves into the spiritual and I thought that was really cool. The main character, Jackson, is a snarky, unwilling psychic, who had a terrible childhood. HIs psychic gift is anything but a gift to him and it gets him into an interesting situation.

Good plot. I didn’t spot all the twists there were so many red herrings; I kept changing my mind about who the main villain was. And ohh there was a lovely little zlng at the end. Recommended.

An "All nighter" for sure.

The author is very inventive. I can't wait For his next book. keep the All seeing eye.

another winner from Rob Thurman! she made this character so compelling I didn't want to get out of the car!

Yes. It was unique. The premise is new and not too complex. It had a good twist at the end. The narrator was very good. Sarcastic humor is something I like in all my books.

When trying to free Charlie, it was brushed over in a few sentences and I don't know exactly what was said or what happened. I don't want to try to rewind because I would have to listen to too much other stuff. In that scene too much detail was put on weapons, injuries, Tess instead of what actually happened to Charlie.

Have you listened to any of Jeff Hoyt’s other performances before? How does this one compare?

No. I will check out other books. He did an excellent job.

All Seeing Eye was a slow to develop story with so much exposition that by the time any action started I hardly cared. The story was told in first person and clumsily tried to sound colloquial by using slang, wisecracks, and sarcasm. This had little effect. I never believed the main character, and I found him annoying (the narrator only made things worse). In my opinion, the world created in this story felt artificial and flimsy.

On the surface, this book should have been perfect for me. A mystery. Powerful and emotional story. Elements of the supernatural.

However, the main character is relentlessly sarcastic and smart ass. The author explains this trait, so it is reasonable to think that someone might be this sarcastic after such terrible experiences and such a burdensome "gift." But I just loathed listening to the main character's dialogue. I stuck with it, because I wanted to find out who the bad guy was, but it was a painful experience.

I think Rob Thurman could have communicated an equally unhappy and jaded character without this extreme number of smart-aleck comments.

I was quite surprised at how much I liked this book. It is quite dark and it isn't full of various supernatural beings trying to have sex with each other (what you usually find in this genre). It actually felt more like a mystery than an urban fantasy, or ghost story. Actually, it wasn't a ghost story at all, and barely an urban fantasy... there are no special abilities here, other than those of the main character, and the only other 'oddity' in the setting was the technical capability that caused the 'mystery' in the first place (so, in many ways, it is closer to sci-fi supernatural than fantasy supernatural).

The characters are extremely well-drawn (well, the main ones anyway), and we like the good guys and we even understand the bad guys, to a point. I almost hate to say it but I was surprised to find out it was a female author (though that explains the very fully fleshed main character). Yes, that is sad, but the bulk of the women writers I read in this genre are always going on about who is wearing what, how hot a particular man is, and discussing the color and movement of characters' eyes. None of that here - just a dark story with a sad premise and a satisfying conclusion.

The narration is very good. There isn't any sex or swearing, but there is some violence, though it was not extreme. I looked for more books by Thurman when I finished this one.