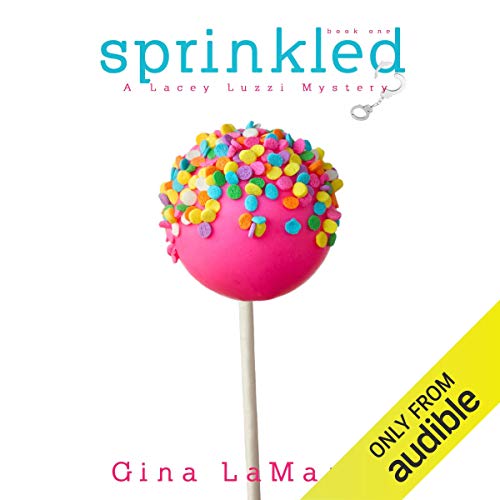 By: Gina LaManna
Narrated by: Caitlin Kelly
Try for £0.00

Lacey Luzzi's roller coaster of a life has been filled with the highest of highs and the lowest of lows. She just never expected the lows to be so...sparkly.

After falling on her face during an attempt to follow in her recently deceased mother's stripper boots, Lacey realizes she is not cut out for life onstage. She sets out on a yearlong investigation to find her true family, never expecting she'll find it with a capital F.

With a rumbling stomach, a need for money ("check engine" lights don't fix themselves!), and a conscience that operates at 78 percent on a good day, Lacey is sucked into a whirlwind of family secrets, hard-as-cement cookies, and mysterious, sexy men who unfortunately shoot guns, sometimes aimed at her face. The long-lost granddaughter of Carlos Luzzi, the godfather of the Italian Mafia, Lacey accepts her first assignment for the mob: finding $15 million of "the good stuff".

Even after she enlists the help of her mouthy best friend and her cousin, a technical genius and social disaster, she finds that going toe to toe with the rival Russian mob is more dangerous than expected.

No one chooses their family, but Lacey Luzzi will be lucky if she can survive hers.

What listeners say about Sprinkled: A Humorous Cozy Mystery!

A rather unusual start, Lacey’s stripper mother has died, three years have passed, and she is just discovering her heretofore unknown maternal grandparents. A bit of an odd duck, Lacey is outrageously confident considering her complete lack of skills, sense or experience. Which makes for a rather fun listen: she’s not stupid, just rather clueless. And suddenly she’s discovered her ties to a ‘mafia family”, far less Sopranos and far more Keystone cops.

This is a completely unrealistic and utterly fun story: leave your expectations at the door – the mystery is clever, the action is non-stop and the laughs are sprinkled throughout. Lacey and her compatriots are brash, daring, impetuous and missing a key tether to the thought of consequences, which just gives this story a feel of a chick lit / cozy mash up.

Narration for this story is provided by Caitlin Kelly, with a voice that is perfectly suited to the character of Lacey: cheerful, chirpy and holding a touch of youth that provide a solid presence for Lacey. Distinct changes in pitch, tone, delivery and accent appear with secondary characters, and make the transitions from character to character easy to distinguish. A clever presentation added to the enjoyment of this story, and kept me engaged.

I received an AudioBook copy of the title from the narrator via Audio Book Blast. I was not compensated for this review: all conclusions are my own responsibility.

Who knew The Mob could be so much fun?!

I think it's unfortunate that Lacey is compared to Stef Plum, they are way different. And that's a good thing. Lacey is NOT somebody's knock-off, but a really fun person in her own right. And the stuff that happens to her, and the messes she gets into will make you laugh yourself silly! Any under 50 can relate to her, and the overs can remember being like her. Her pal Meg is soooo like my best friend since the 4th grade! No plot spoilers here, just be prepared to have fun. Remember: A good laugh is like 10 minutes on a rowing machine (old YMCA ad).
Caitlin Kelly is great as the audio performer! Peppy and easy to listen to, with good voice interpretation of the numerous characters (pun intended).
This book was a gift courtesy of AudioBook Blast

Potential was there but save your credit

Struggled to finish and kept hoping it would get better. Storyline had potential to be funny but characters were not developed and it was too predictable. I like Stephanie Plum for fun and this was not like it. This was tough to finish and not funny, which was a shame because it could've been.

Entertaining if you can suspend a lot of disbelief and get past the fact that the main character is a 29-year-old woman who has the sex drive, maturity level, and hygiene habits of a teenaged boy. Three stars because I didn't hate it, though I'm not sure why.

Not my idea of a cozy

What disappointed you about Sprinkled: A Humorous Cozy Mystery!?

Everyone's humor is different, and what may be funny to me, may not be to someone else. THIS was anything but funny.

What was most disappointing about Gina LaManna’s story?

Caitlin's performance was based on the story. She did fine.

The mafia idea was good.

Can't even finish it. Nothing funny about it.

Don't bother buying it. I usually finish even the not so good books but after 3 attempts I can't do it.

'If you like Stephanie Plum - you'll enjoy Lacey' - NOT. This book has a super thin unrealistic plot that makes no sense. Will not be continuing the series.

The story had some really amusing snippets and some excitement and suspense; but there was also a lot of just plain un-amusing silliness. At times the heroine, Lacey, acts so immaturely that I got tired of her problems and situations. “Just Grow Up Already!” This issue wasn’t helped by the narrator who sounds more like a 17 year old than 28.
There are quite a few characters and locations, and Lacey bounces around all of them non-stop, exhaustively and occasionally with loss of story continuity.
I listened to the end because, although not great, it offered entertainment during a long road trip and housework.

I really thought that I would have liked this book, because I like all of the other Gina LaManna books, but I had a hard time listening and keeping up with the story line.... I found it kinda stupid.. I won't be wasting my money on the other books in this series!

Where does Sprinkled: A Humorous Cozy Mystery! rank among all the audiobooks you’ve listened to so far?

I listen to a lot of nonfiction, so this was a fun change. It's also a bit different than the traditional cozy mystery- in a very good way! I couldn't see what was coming and there was a lot of "oh my word, she's in so much trouble" moments that I loved.

What was one of the most memorable moments of Sprinkled: A Humorous Cozy Mystery!?

I enjoyed how the narrator voiced the main character and her closest friend. Their conversations are pretty humorous and the narrator's voice changes added a lot to the listening value.

What does Caitlin Kelly bring to the story that you wouldn’t experience if you just read the book?

I loved her voice and the different "voices" she brings to the characters. Caitlin sounds like I imagined the main character would really sound. Her voice is vivacious, curios and youthful.