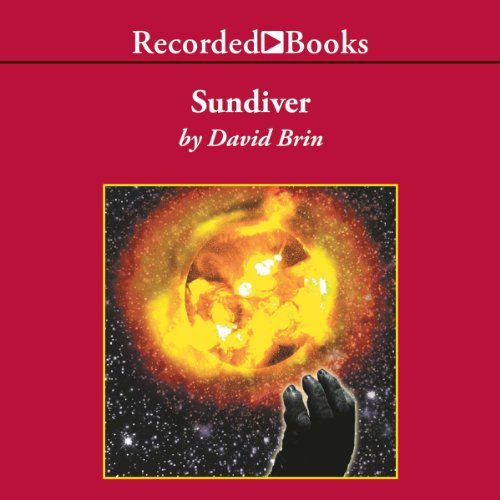 By: David Brin
Narrated by: George Wilson
Try for £0.00

David Brin's Uplift novels are among the most thrilling, highly regarded works of contemporary science fiction. Beginning with Sundiver, Brin provides an intriguing exploration of humanity's future in the universe.

For nearly a billion years, every known sentient species in the universe has been the result of genetic and cultural guidance - or "uplifting" - by a previously uplifted patron race. Then humans are discovered. Having already uplifted chimps and dolphins, humanity clearly qualifies as an intelligent species, but did they actually evolve their own intelligence, or did some mysterious patron race begin the process, then suddenly abandon Earth? The answer to this mystery might be as close as our own sun, but it will take a daring dive into its fiery interior to know for sure.

What listeners say about Sundiver

I am a sci fi fan. I have read almost everything from the 60's onwards but somehow missed Sundiver. Now I get my books in audio format to listen to in the car and most are brilliant.

This one is not. The narrator has the most boring awful voice I have heard. Dull, monotonous, rumbling, unclear and those are his good points. But that would be ok if the story was good. Sadly this is not the case. It is a sad and tired example of 70's/80's sci fi. 2d characters, boring overlong descriptions, totally unrealistic dialog and cringeworthy sex.

I gave up half way through - something I have never done on an audio book before.

I downloaded this book on the recommendation of someone who had read the printed version and did so noting some of the earlier criticisms of this particular reading and the narrator.

I very much enjoyed the book. Brin's universe is one filled with political intrigue and trans-species rivalry. His inventiveness and descriptive powers of an environment as unlikely as the surface of the sun were excellent.

Like many, many sci-fi novels, I think it could have done with a slightly firmer editor's pen but, given the genre, I thoroughly enjoyed it.

I also must respectfully disagree with the criticisms of the narrator's reading. Personally, I found it very well executed. I found the voices - which didn't seem silly to me at all - very helpful for keeping the panoply of aliens straight in my head.

All in all, I was very happy I'd bought and listened to it, and I have bought the other two in the series on the strength of my impressions of the first.

This is one of Brin's ealierier novels and the story telling is a bit stilted. Part of that is the process of Universe building. The concept of a universe based on Uplift is easy to grasp but hard to explain. The other part is that it was Brin's first published novel. Even a great first novel is a first novel. The story is a good mystery based on scientific possiblilities. The Universe he creates is interesting and engaging as are the characters.

The narrator does an excellent job of dealing with both human, terrestrial and alien characters. They are clear and recognizable.

I look forward to listening to the rest of the books.

The first 4 hours of this book are pretty bad. Nothing much happens beyond finding out what "uplift" means. The main character, Jacob, goes from one place to another and talks to people and that's about it. To make matters worse Jacob is grief-stricken, making him detatched from humans, and has a kind of splintered personality; so there isn't any character development either. Dull.

After that things pick up a lot. Aside from the hard S.F. elements, and the world-building, there is a mystery- a pretty good whodunit- and the questions about what the aliens are up to, what's going on with the Solarians, and the revelations about Jacob's character. And some action too.

The narrator is terrific- especially considering he has to do 3 alien species, a dolphin, and a chimp. Talk about earning your pay!

That said, the first 4 hours are a real obsticle. Unless you are a Brin fan I'd advise getting "The Uplift War" instead. The "trilogy" is really 3 unconnected books set in the same universe. Execpt that "Startide Rising" is continued in the next "trilogy".

I remember avidly reading Sundiver and its companion novels when they first came out. I was awestruck and deeply inspired by the ideas presented within the form of the story.
Years later it has been fun revisiting Sundiver in this audio presentation. The narration is a little dry but gets up to speed as the story progresses. The writing is unexceptional but does the job. Here its the ideas that really matter, a must for fans of Silversberg, Heinlein and Neal Stephenson.

Good book and a decent narrator. Unfortunately, the production value is not nearly as good. Swallows and other sounds are audible and very annoying.

While the premise was interesting and I intend, and am looking forward to reading more I found the storyline terribly predictable, while there were a few twists I didn't see, the I found myself frustrated that the protagonist couldn't see the, to me, glaringly obvious answer to the central mystery.
Still as a scene setter for a more sweeping saga it did well, introducing the politics of the milieu and laying groundwork for future developments

Bought all three listened to only this one

I bought the trilogy after the repeated recommendation of a friend. However, I only listened to the first when I realized I would not be listening to anymore. --

In the entire first half of the book (8 hours) there is only one action scene, there is no real significant character dialogue, and I wasn't invested in the characters. I fought myself to finish. --

This book attempts to stress the Science in Science Fiction, but the science is so dated that it gave the story a shelf-life. This is not always the case with older scifi, but it is definitely what happened here, the story was too weak to support the setting, and the book was obviously written to express the setting. --

The reader lacked any real emotion in his delivery, but does a good job making you aware who is talking with all but the female characters. The recording would have benefited from some editing. There are too many times I hear the reader make large swallows (I actually believe he was taking a drink) and other issues that made the production feel sloppy. --

I reserve 1 star ratings for works that I cannot bring myself to finish, so this is the lowest rating I could give.

I decided to pick this book up based on several of the reviews and the of some great Sci-Fi. With billion-year old science, I figured there were some fantastic possibilities here.

Although the lack of any real exploration of the advanced science was disappointing, the characters were the true let down. Virtually every character is one-dimensional, often making decisions purely for the benefit of the story. For example, the main antagonist's actions lack any real sense of explanation and the "highly skilled and in control" female lead also crumbles into the protagonist's arms in a totally unbelievable fashion.

The worst offender is the protagonist himself. The author tries to style him as a n almost James Bond-like lead, capable of almost any feat and always a step ahead of those who surround him. However, the effort falls flat, leaving an ultimately unbelievable character that I disliked more and more as story progressed.

Not what I thought it was but good

Well let me first say that this wasn't what I expected it to be like, it was good contained some surprises and overall was worthy of reading.

There are some things about this story that are a little unexplained or maybe poorly explained, you can understand whats happening but its not until the end that you really get what is going on and then there are more questions.

So there are these "things" in the sun that people have seen when going into the surface of the sun doing observations for science. The Aliens don't understand this because there is a "galactic library" that holds everything one needs to know so there is no reason to do research like that anymore but being the suborn Humans we are we are doing it anyways - well things are seen in there that look to be sentient life and its the research vessel that goes into the sun to research these things and report back because the "galactic library" doesn't have anything on what they could be so some suspect that they have been lied to and the copy of the library that we humans have is not complete or maybe deliberately missing stuff

If you know who Erich Von Daniken is and his book from 1986 called "Chariots of the Gods" and latter works you know about the "uplift theory" where by aliens have "uplifted" humans in the distant past that's why we cant find the so called "missing link" in the evolutionary tract and why we have jumped so far in such a short time, this is sorta the concept of the books back story.

In this book we Humans have uplifted dolphins and chimps to full sentient as in able to think like a human can or at least at the same intellectual level which results in chimps and dolphins talking to humans and helping them do tasks like any other human would except for dolphins can do underwater stuff better - its a cool concept and according to the galactic library almost every single race was "uplifted" by another race leading all the way back to the start with some group of races that isn't explained completely , but humans don't seem to have a "up-lifter" which is a little strange to many aliens

The Humans here think that maybe the beings in the sun could actually be the uplifters of humanity, and will the Aliens help them to understand it or maybe do something even worse?

There isn't much about this book I didn't like other than it was missing some better explanations and maybe a nice pre-story for a chapter or so to get you into the world thats created but it was good, I am going on to the next book so check my reviews for that one to see if it is as good as this one was

Dated and rather dull

You can't get more 70's than this book. The premise is an outgrowth of the Chariots of the Gods. The main character practices self hypnosis, and it produces results. And the technology is what a 70's person would predict (the main character has to hunt down a phone at one point). Not that all of this is bad, per se. But it is a pretty boring read, to boot. I got to the point where the main character was going to reveal the killer (yes, it pretty much follows a murder mystery format) and realized I didn't care who did it or why, so I quit listening.