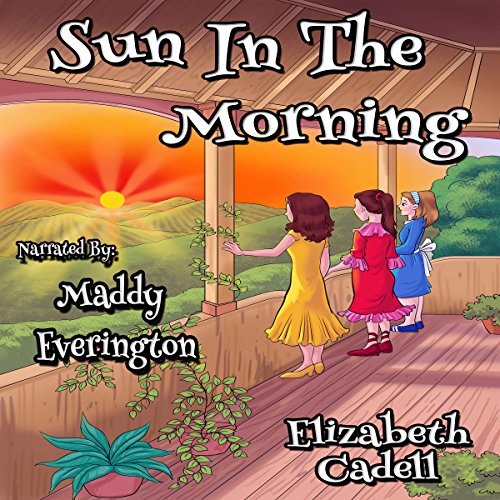 Sun in the Morning

By: Elizabeth Cadell
Narrated by: Maddy Everington
Try for £0.00

Although this story's particular events could not have happened anywhere except in British-India, everyone will feel at home in its sunny atmosphere. The three girls who lived these adventures were completely different, but they formed a close-knit trio and shared all of each other's joys and problems. Poopy possessed a face that seemed blank to everyone but her two friends, who read it with ease. She started each day neatly dressed, but within 10 minutes the other two were pulling up her shoulder straps and anchoring her garments with safety pins. Marise had beautiful curls and a chic born of her French ancestry. She came to the rescue with expert advice when Poopy fell irrevocably in love with the first man she ever really looked at. Poopy, in turn, knew how to counsel Marise in the sedate behavior likely to win over her prospective mother-in-law.

With neighbors like the dear, hilarious de Souza family ("Benny de Souza was 12, and knew everything-his conversation was an undiluted stream of solid facts."), Mr. Rogers the actor, Miss Gumm the piano teacher ("I began the Chopin with confidence, but before I had gone very far I felt a strong push and found Miss Gumm preparing to take my place."), and Mr. Andros ("that chap that goes and shoots man-eaters"), everybody and everything just a bit unexpected. The story is seen through the eyes of a girl whose name we never learn. She views her friends with love and loyalty and humor, and knows that life will never be quite the same when her girlhood is over.

Editor's note: This book, though written in the style of fiction, is largely an autobiography of Elizabeth Cadell's own childhood in British-India in the early 1900s. In listening to it, her fans will gain a wider perspective of their favorite author.

What listeners say about Sun in the Morning

This is a lovely, humorous, gentle story that is a semi-autobiographical story of Cadell's own childhood in the India of Empire.

I loved all three of the girls who were best friends.

What does Maddy Everington bring to the story that you wouldn’t experience if you had only read the book?

Maddy did an absolutely amazing job. I am particular about books I listen to, and gave another Cadell with a different narrator a bad review. I think her over-the-top characters are hard to reproduce, but in this case, Maddy really brought the different accents to life. Not one was overdone from French Maurice to the little Indian boys.

I laughed several times, but it's sorrows were of the gentler sort, so no tears and I cry easily. But it was very touching.

This is one of my favourite Cadell novels, and this audio version is the perfect reader for the text.

A biography of the author by her talented daughter Janet Reynolds (Lady Grantly Publishing 2005) contains many references to Sun in the Morning. It is located in the back of the special limited paperback edition of another wonderful Elizabeth Cadell book - Death and Miss Dane.
I first read Sun in the Morning (written in 1952) and her second India based novel, A Lion in the Way, over thirty years ago.
Listening to the incredibly talented Maddy Everington (great grand
daughter of the author) lead me through the daily life in India of a young girl in British-India in the early 1900s has been a riveting and most enjoyable experience.
Maddy Everington, as narrator had me enthralled. I listened to the story in one day. I really enjoyed this story based on Elizabeth Cadell’s early life. The excellent narration was the icing on the cake

Narrated by the author's great granddaughter!

Would you consider the audio edition of Sun in the Morning to be better than the print version?

I think both are lovely, but hearing the story adds a new layer of lovely, particularly with such a fine narration.

I LOVED her performance!

The story is quite different from Cadell's other books, but the writing and characterization is familiar and the narration is delightful.

This story was so gentle and entertaining.

A great story for a person such as myself with 5 decades behind me, and still I can see the younger women, unmarried still at home longing for a good story of a British young girl and her friends living in India. Their adventures are quite believable but not boring. I'm about to download what I hope will be more of the same.

If you could sum up Sun in the Morning in three words, what would they be?

There were so many plots. It was a fictional story based on the author's childhood in British India.

I laughed at the part where the house was built over a cliff and the older sister of the young girl brought her fiance and she kept stamping her foot onto the floor and scared her fiance.

This is one of my favorite books in the world. I can't even explain how cute it is. So many funny and interesting things in the story. I can't imagine anyone not loving it. I think anyone who doesn't like this book must be from another world.

Charming, fascinating, humorous story of three young British and French girls who are best friends in India before WWI, their adventures with an engaging and lively Indian family of eight children, and their parents.
Told from the point of view of a 10-year-old and written as fiction, it is based on the life of the author.
Humorous, memorable characters and events; even the few dramatic moments are heartfelt and uplifting.
Separated by war for six years (not discussed as this is a memory of happy times), the three girls, now teenagers, reunite joyfully in India and romances blossom.
The narrator (the author's great-grandaughter) is excellent with all the dialogue and especially with different accents, so don't let the rather flat narration at the beginning put you off.