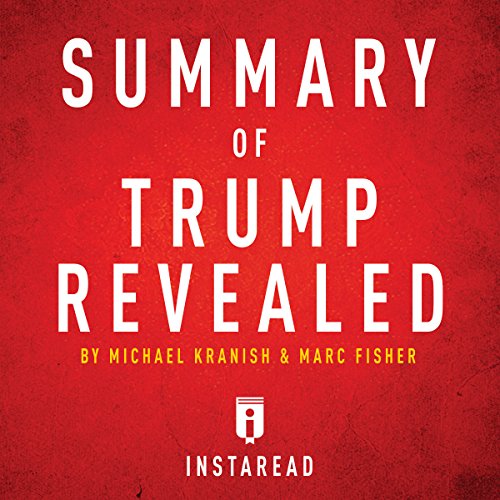 By: Instaread
Narrated by: Dwight Equitz

Trump's mother, Mary Anne MacLeod, grew up on Scotland's Isle of Lewis and emigrated to New York City in 1930. Trump's father, Frederick Christ Trump, was born in the South Bronx to parents of German descent. After Frederick's father died at age 49, Fred got involved in the family real estate business. Fred bought up land in Queens during the Depression. In 1935, Fred met Mary Anne, and they were married a year later. On June 14, 1946, the fourth of their five children was born: Donald John Trump.

Donald Trump grew up in a 23-room mansion in Queens. Young Trump was a troublemaker who was once caught throwing rocks at a neighbor's baby.

Please note: This is summary and analysis of the book and not the original book.

I bought this thinking it was an extension of Trump Revealed which ended as Trump decides to run for President of USA, a book which is an extremely detailed and interesting account of Donald Trumps life from birth to his decision to run for Presidency.
Given how detailed it was going into its his criminal associations with the mafia and various frauds, scams and ways to avoid paying taxes by finding loopholes in the law.
However it didn't go beyond what was covered in the main book, it really IS just a description and analysis of the books contents.
Looking at it in two views, if you just want the bare bones account of Trump, his life and times this is perfect. Second view is if you want to know all about Trump in absolute detail, buy the main book 'Trump Revealed' which is enlightening.

What disappointed you about Summary of Trump Revealed by Michael Kranish & Marc Fisher?

The description of this book said there would be a bit of analysis. There isn't. The poorest excuse for a listen that I've ever heard. Wasted $3 and 25 minutes.