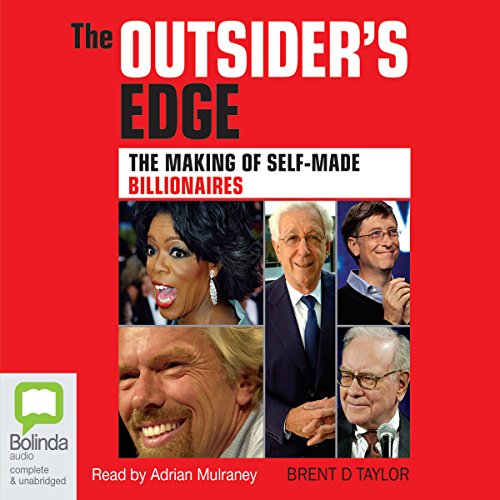 If you’ve listened to The Seven Habits of Highly Effective People, How to Win Friends and Influence People, and the hundreds of other guides to wealth creation and you still aren’t rich, maybe this audiobook is for you. Performed by Adrian Mulraney in a voice that sounds more professorial than entrepreneurial, Brent D. Taylor’s The Outsider’s Edge focuses on 17 well-known billionaires and identifies their "outsider" statuses as a major factor in their successes. Biographies of Taylor’s examples - from Bill Gates to Oprah Winfrey - are rehashed and anecdotes meant to inspire are deployed. For those seeking to bolster creativity, see Taylor’s The Creative Edge. For military personnel looking to achieve greatness, Taylor is now at work on a similar tome for you.

The holy grail of extreme wealth creation has been found at last by professional researcher and author Brent D. Taylor after four years of intensive searching.

Some extraordinary and unexpected factors are revealed in Taylor's fascinating new book that explains why some people become billionaires. Despite the fact that the sample of 17 self-made billionaires come from disparate backgrounds, work in different industries, have very different personalities, and superficially appear to have different upbringings, they have one important thing in common. They are all outsiders. Their edge comes from being different and that difference is the well-spring of their creativity and wealth. This combined with direction, drive and trading intelligence has powered them to extreme wealth.

The Outsider's Edge will appeal to lovers of well-written biography; business enthusiasts and entrepreneurs looking to learn from these ultimate wealth creators; parents and educators interested in development - this book debunks a set of conventional wisdoms perpetrated about home and school; and, last but not least, outsiders themselves who have up until now been poorly served by biographies and other analyses extolling them to fit in, which frustrates them greatly, since simply they can't. Many outsiders may now wear their status as a badge of honor rather than a cause of embarrassment.

This book is a great short cut to the lives of many billionaires, their life's stories and their struggles to achieve their fortune.

Little or no science or evidence used. Bad Book

This book is written from an envious point of view with little or no facts used but rather an author who just puts his own judgement on things to support a conclusion he came up with before starting his "research".

If you're someone ambitious looking for a book with important lessons or guide to help you succeed avoid this "rich people have issues and are evil" themed book at all costs.

This book would have been much better had it suggested its premise rather than decreeing it. The first half of the book is biographical - summarising the lives and careers of a collection of self made billionaires. The author labels these businessmen "outsiders" as their upbringing had led them to be outsiders. Being a fellow outsider (without the billions of $$!!) I really connected with this part of the book and it was extremely interesting to compare my upbringing and career to the books outsiders. Unfortunately, the book's second half is hours of waffling where the author gives some rather shallow and unscientific presentations on psychology, sport and medical conditions like dyslexia. The second half of the book should be supplied with a free broom - for it is full of sweeping statements.
While Malcolm Gladwell's "Outliers" covers some similar ground positing what factors contribute to certain people's success, Gladwell mostly manages to remember he is being guided by anecdote, where this author frequently seems to make it up as he goes along - the most obvious example being his frequent references to dyslexia, which he never presents evidence for.
Its a shame, for this book makes quite a convincing case when the author sticks to telling the story of the lives of the Outsiders - but when he decides that these anecdotes are hard and fast evidence and not only that, but that they are a blueprint for success, that the book loses credibility.
If you're an outsider, read / listen to the first part - its quite interesting. Skip the second half.
If I were to summarise the premise of the book - its the old adage - Q: What's the definition of a nerd? A: The guy at school you used to tease who is now your boss.