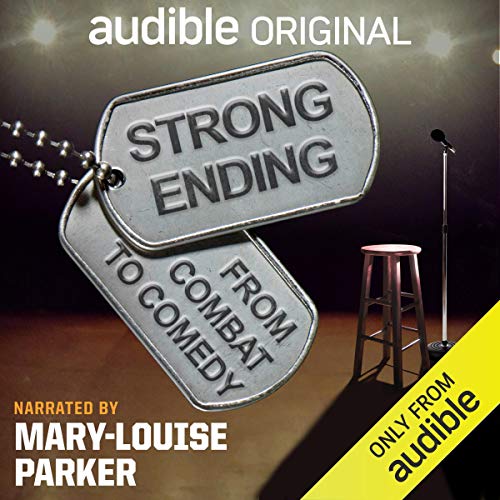 A Journey from Combat to Comedy
By: Audible Originals
Narrated by: Mary-Louise Parker
Length: 1 hr and 16 mins
Categories: Non-fiction, Social Sciences
3 out of 5 stars 3.0 (1 rating)

This heartfelt Audible Original, narrated by Emmy and Tony Award-winning actress Mary-Louise Parker, follows three military veterans as they reclaim their most painful memories and turn them into comedy. Michael Garvey, Isaura Ramirez, and Patrick Harth left combat zones to challenge themselves in a stand-up comedy boot camp. As they learn to transform their raw emotions into cathartic experiences, they face the daunting challenge of trying to make an audience laugh with jokes about war, trauma, and mental health. This audio documentary details their move from military service to sharing their searing honesty and gritty strength while performing in front of packed crowds.

Strong Ending also features insight from professional comedians Rob Riggle (The Daily Show, The Hangover) and Maria Bamford (Lady Dynamite, Arrested Development) as it explores the science behind the healing power of comedy and the role of military comedies in popular culture. A perfect mix of wit and warmth, this is an inspiring and honest listen that unearths the anxieties of readjusting to civilian life and the powerful potential of finding light in the dark.

About ASAP & Comedy Bootcamp: The Armed Services Arts Partnership (ASAP) is a nonprofit with a mission to cultivate community and growth with veterans, service members, military families, and caregivers through the arts. ASAP promotes expression, skill-building, and camaraderie through classes in stand-up comedy, improv, storytelling, creative writing, acting, and the visual arts. ASAP's approach provides veterans with transferable life skills, a renewed sense of purpose, and improved well-being, while strengthening ties between veterans and their communities through the arts.

Wow I was both laughing and touched from this production on wounded and traumatized vets using stand up to heal themselves. Felt like a shot of empathy.
Nothing bad to say. Good narration, unique topic, good balance of narration, interviews, and the live recordings from the stand up show.

28 of 28 people found this review helpful

Great energy. Very enjoyable and emotionally informative. If you’ve ever found comfort in humor when life was too much, you’ll like this.

Mary Louise Parker is a great narrator. I was a bit concerned because, though she is a terrific actress, sometimes she can mumble. But here she was clear as a bell.

15 of 15 people found this review helpful

Audible, thank you for giving this out!

I was a very lucky man and spent my time in the Army during a small window of no shooting, back in the mid 70's.. Post Vietnam letdown I guess.

Hearing these vets let go of the pain in this way is totally inspiring.
Audible, you done good!

Amazing stories of healing through laughter. Healing comes with strength gained by sharing our pain in a way that it can be laughed at.

10 of 10 people found this review helpful

Healing through comedy is something the whole world should do, regardless of what field we come from.

18 of 19 people found this review helpful

What if the best way to combat PTSD is to give veterans a microphone and get them to perform stand up comedy? That is the premise of this short documentary.

There are jokes, and stand up comedy, in here but that is not the bulk of this. It is about mental health. It's an important, and sometimes heavy, topic lightened by some mixed in comedy.

'Strong Ending' tells the story of several veterans who when returning from the front were diagnosed with PTSD, and the joined a comedy workshop to work through the PTSD. they talk about how it has helped. It's not a cure all, but it helps them discuss their issues and release built up pressure. They speak to Doctors and Psychologists about the effects of PTSD and why comedy is an effective release.

While it is narrated by actress Mary-Louise Parker, it is as much interviews as her narration. Interviews with comedians, interviews with doctors and psychologists. There is music and sound effects. The whole thing is well put together. The live sections of stand up comedy, which is not significant, is generally lower quality but that is to be expected for live recording from small comedy clubs. But the general mixing and quality of the audio, as well as Parker's narration is great.

34 of 37 people found this review helpful

This was an interesting and insightful audible original. I enjoyed that they told the stories of the veterans and how they cope with their trauma. I enjoyed the fact that they proved that laughter can be the best medicine. It was a behind the scenes of comedians with traumatic stories to tell.

16 of 17 people found this review helpful

This is a beautiful glimpse into the lives, and hearts, of Veterans.

The courage to just do it, after what each has experienced, is awe inspiring.

The personal transformation they speak of, breathtaking.

To serve and, literally, fight for this Country is, in itself, remarkable - but, to survive it - the after - and walk the walk of a civilian, and continue to live, and heal - is phenomenal.

I fell in love with each story. Smiled and cried, like the Military Mom I am, wishing I could hug them each long and hard.

Listen. Very worth your time.

Wish they had that program around here. As a Vet with PTSD, I seem to be the only one laughing at myself. People tend to walk the long way around when they notice this (or get a whiff of me) and I respond - with all due seriousness, "It was funny!" - (in my head) and then I realize that I can't remember what I heck "I" was laughing at. Now, at this point, I'm just laughing at them! - or,.. that's what I thought I was doing. Hey, I cudda gotten upset, like I used to (for the rude interruption of my comedic-flow) but sometimes "they" just don't get it,... and it's all good - I still got paid. Straight-Hundo ~ yo! Service Connected!!! and that junks copy- righted. All Rights Reserved. The use of any, all & afore mentioned words or the likeness thereof is hereby "irregal" & against da' law & a 10,000 lb Sweaty Stinkin'/Freakin'Siverback Gorilla Will hunt you down & smash yo' unimaginative & pathetic, plagiaristically - swole head,... forthright. Thank you for listening :) Great!!! Now, I'm late for my Warrior Yoga at the VA. Anyway?,... whatever!

I don't know much about PTSD, but I have panic attacks and anxiety. That's really besides the point, because I am going to come at this one like I know nothing (which is closer to the truth). It made me have joy in my heart that these Veterans, victims of injuries, PTSD, and other things, have found a true light in being able to share his/her experiences on the mic in front of people and get a laugh.

Mary-Louise Parker did a fabulous job narrating, Maria Bamford is an incredible comic, so I'm always glad to hear her, and the Veterans were so funny and inspiring. This is something you should not miss. It is so inspiring!