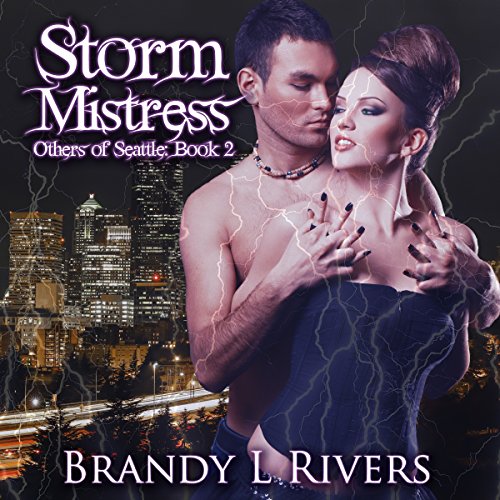 Everything Isadora Starling wants is right there in front of her, but Toryn is off limits; he's her best friend. She has been denying her heart all these years, afraid to lose him.

Toryn Flame has a long past full of secrets, none of which he can share with Isadora, the only person who truly matters to him. She's the one woman who has never shown a hint of lust toward him, but even if she did, pursuing her is forbidden.

That all changes when the family Isa doesn't know decides it's time to reveal who and what she is. After Isa's recent attack, their motives are unclear.

His only goal is protecting Isa. Toryn will do everything in his power to keep her safe, including going against orders from his king.

Toryn's only fear is losing Isa's trust. Once the truth is revealed, can she forgive him for years of misdirection and omissions? Can she come to terms with a world she doesn't want or know?

What listeners say about Storm Mistress

This is the second book in the Others of Seattle series. I really enjoyed it.

I decided to get this book in audio format, since I had listened to Night's Embrace this way. This book is again narrated by John Lane, who did a wonderful job in bringing the characters to life.

Isadora Starling is a wonderful character. I like her strength and determination. She has felt a strong attraction to Toryn ever since she met him, but he's never shown any interest in her. When a stranger brings danger into her life, she turns to the only man she can trust.

Toryn Flame is also a wonderful character. I really liked him. He is a little mysterious and I enjoyed getting to know him better. He is determined to resist his attraction to Isa, as he has a mission to fulfil. Unfortunately, danger forces him to face breaking Isa's trust and reveal secrets that have been kept from her; that's she's a Fae Princess and has power over the five elements, fire, air, earth, water and wind.

I started to listen to the story and was quickly hooked. I found myself on a wild ride of action, danger and romance. The story is told through the eyes of several characters, though Isa and Toryn have the most say. I love meeting Toryn's mother, though she scared me a little. I also found myself intrigued with the dragon, Adanathos (sorry, not sure of spelling), who was only in a few scenes. I also enjoyed meeting Leon, Toryn's friend.

I enjoyed watching Isa grow into her powers. She is a truly powerful and formidable fae. I also enjoyed watching Isa and Toryn's relationship bloom. They both have an amazing chemistry that fizzes and pops; the sparks are extremely hot! The danger from Remus and his greed for Isa's power made me shiver. I know the Fae world is a little strange, but his plans were pure evil.

However, although I enjoyed the story, I also found that there are mentions of other characters' and relationships from the Others of Edenton series that surprised me. As I have only read a few of the books from that series, I found the mention of these couples as a little spoiler-ish. Therefore, I have come to the decision that I will not be continuing this series until I have caught up with Others of Edenton first. I mean no disrespect, because I really love this series. I love the Other's world in Seattle and the characters in it and look forward to continuing it soon. But, for now, I will be focusing on the Others of Edenton.

Brandy L. Rivers has written another intriguing paranormal romance series. I loved her fast paced writing style, and the flow was wonderful. Her characters are lifelike and likable. She is now one of my favourite authors.

hooked from the start.

I loved this audio book so much that I couldn't put it down, the storyline and characters felt almost real I was hooked from chapter one. brandys work is the best I've listened to since becoming an audible member and will definitely be on the look out for future titles from her. This is a well earned 5 star rating for another brilliant creation from the wonderful mind of Brandy L Rivers. highly recommended :)

Isa and Toryn have been friends for a long time. She has always wanted more but thought he wasnt interested. Toryn has a secret he has been keeping from the girl he is head over heels in love with but is only supposed to be guarding.
When Isa gets attacked and secrets get revealed, will the truth break them apart or finally put them where they belong...in each others arms? Things are not always what they seem and what is a girl supposed to do when she finds out her whole life has been a lie? Well if your Isadora, you have smoking hot sex with your bestie and you take the bull by the horns and deal!
This is my favorite Brandy Rivers book so ( which is saying alot since I love everything she writes! )
John Lane does an amazing job narrating an already phenomenal story!!! This is a win win for any paranormal fan!

I Love Isa an Toryn!!

What made the experience of listening to Storm Mistress the most enjoyable?

The story is compelling, suspenseful an keeps your attention. John Lane does an amazing job with all of the characters, listening to his voice while the story is being read was very enjoyable

What other book might you compare Storm Mistress to and why?

This goes very well with the Others of Edenton series really well.

Have you listened to any of John Lane’s other performances before? How does this one compare?

This performance was well done an hot. The voices he does are amazing. He really brings the characters to life with the tones an accents he does.

Yes there were a few but I never give any spoilers in my reviews an to explain what moved me would be spoilers....but yes there were parts of this story that touched me.

Isadora and Toryn endure much danger, and betrayal. Iasdora's father and uncle are trying to control her as she is very talented in magic.

If you could sum up Storm Mistress in three words, what would they be?

I liked that this book had humor and the narrator brought that our in his reading!!!

Have you listened to any of John Lane’s other performances before? How does this one compare?

I have, This i feel was one of his best!

This book made me laugh, more so then when I read it the first time

This is a great book by Brandi L Rivers, I like that it was funny in spots during the whole story. I like that while listing to this book, I picked up things that i missed while reading it. I highly recommend this book!!!

Yet another book from Brandy Rivers I was unable to stop listening to. I am in LOVE with Toryn Flame and need more of him ASAP. I was luck enough to listen to Storm Mistress on audio and much like its predecessor, Nights Embrace, the narrator, John Lane”s voice was smooth and sexy and had me completely drawn in to the story.

Too complex to go into great detail, the story in Storm Mistress revolves around the wold of Fae (a new to me creature) and the inner workings of their homeland. Toryn has loved his best friend, Isa, secretly but since he is sworn to protect her he has never acted on it. Isadora’s crush on Toryn has always been the subject of her deepest fantasies but content with the fact that she believes he men she is just happy to have him as her best friend.

As always with Brandy’s book nothing can stay easy for long and while Toryn is determined to keep Isa safe there are others out there determined to do just the opposite. But the best part of this book and Brandy’s other books is that Isa is not the kind of heroine to sit around and just let a man keep her safe. She takes her safety in her own hands and does whatever is necessary to keep herself and those she cares for out oh harms way.

This series is quickly becoming very addictive. The world’s of Brandy’s “others” are huge and interconnected and every time I see a new overlap I get giddy and excited for more. Saying that I want to note that this book can definitely be a standalone but I promise if you read it you will want to dive into the others very soon.
~miranda

Would you consider the audio edition of Storm Mistress to be better than the print version?

I found both formats equally enjoyable. The print version allowed me to use my imagination and visualize the characters. The audio edition brought the characters voices to life.

My favorite character is Toryn. He loves Isadora and will do anything to protect her. He makes her feel wanted and sexy.

John Lane did a good job in bring Brandy's characters to life. He was consistent, clear, and his performance was enjoyable.

Brandy L Rivers is a gifted writer. The characters and plot in Storm Mistress are likable and engaging. Overall I enjoyed listening to this audio book. I recommend the Others of Seattle series if you enjoy a good paranormal romance filled with steamy scenes and magic!

What did you love best about Storm Mistress?

I love everything about this book!!!

When Isa meet Toryn mother for the first time.

This book is amazing and this series is so freaking awesome!!! I just love Isadora and Toryn they are so totally amazing characters in this book. There is so many twist and turns in this book and an amazing love story in this book that I just could not put it down. To know more about this book grab your copy today so so so a must read!!!!!

I absolutely love this series

I love this book. It explained a lot about other characters from this series and the others od Edenton one too. Loved their relationship and how good friends turned into true love.