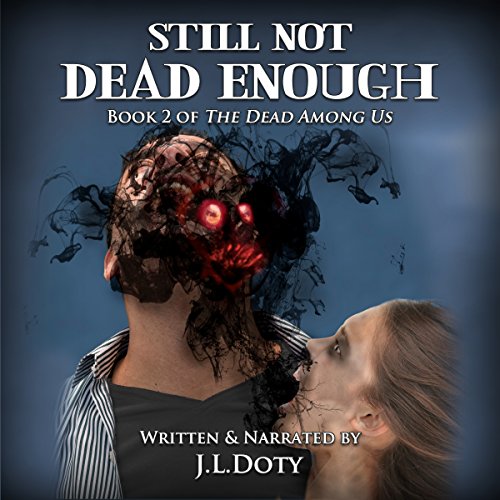 Salisteen, a very powerful colleague of McGowan's, suspects a demon is loose in her city, the Dallas/Fort Worth area. Something has murdered and possessed the souls of a string of young girls. At her request, McGowan brings Paul down to see if his special necromantic powers might be of help in hunting down the demon. McGowan also brings Colleen and Katherine. But Salisteen's hidden agenda is for her and another senior practitioner to have a look at Paul, and he finds himself under their microscope.

From Anogh Paul gets hints that Suzanna's death was not an accident. But Anogh's insinuations are vague and frustratingly obtuse, and Paul begins to suspect that Anogh murdered Suzanna, or at least had something to do with her death. It's then that Paul starts to realize the dead, and maybe a few Sidhe, still aren't quite dead enough, and that they probably just need a little helping hand to get there.

What listeners say about Still Not Dead Enough

Liking it more and more!

Although not as intriguing as the first book (obviously a lot of the initial mystery and confusion are cleared up in the first book!), there’s definitely still enough to keep things interesting and the story is great!
Having listened to the first book directly prior meant already being used to the narrator so it is even more enjoyable! ...already started book 3!

This is book two in The Dead Among Us series, if you haven't read book one, I'd recommend picking that one up first! This series is perfect for fans of paranormal fantasy and horror.

Book two begins with Paul apprenticed to the old wizard McGowan. McGowan is trying to teach Paul to master his own particular brand of magic, necromancy, which hasn't been seen in centuries. Paul still has trouble taking the whole wizard thing seriously, and Katherine is wary of his powerful potential. They're invited to Dallas to investigate a series of mysterious deaths. A demon is possessing the souls of young girls and McGowan's colleague in Dallas wants to use Paul's talents to get to the bottom of it.

Meanwhile, in the Faerie realm, the Summer Queen and Winter King are plotting to bind Paul to their respective courts. To do this, they enlist the help of the black fae. Anogh, the Summer Knight, has plans of his own, and drops hints to Paul that he may have knowledge about the events surrounding Suzanna and Cloe's deaths.

This was an action-packed book that kept me up listening late into the night. Some new magic users were introduced, but the focus was still on McGowan, Katherine, Colleen, and Paul, all my favorites. I liked the crusty old wizard, and Colleen was mysterious and fascinating. Paul was still facing his own demons, figuratively and literally, and Katherine had her own bad relationship issues popping up which had her asserting her independence. The magic was interesting, and the writing so clear you could imagine everything as it happened. And of course, it had some really funny moments that had me laughing out loud!

J.L. Doty is both author and narrator, and did a great job. He performed voices for each character and he made them come to life. I requested a copy of the audiobook, and I'm voluntarily leaving a review. I do want to leave a little trigger warning: Sex is used as a weapon and tool for pain in some situations, so if that bothers you, this book may not be for you.