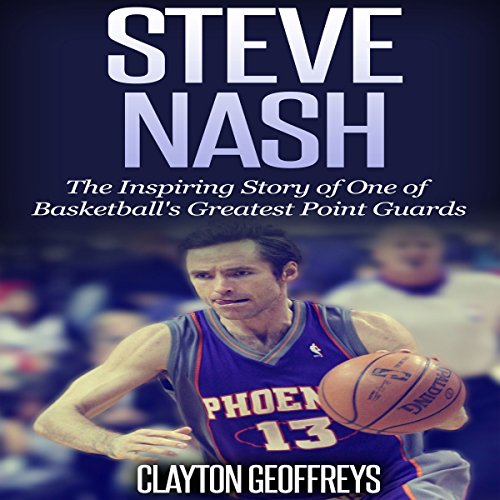 Learn the incredible story of basketball superstar Steve Nash! In Steve Nash: The Inspiring Story of One of Basketball's Greatest Point Guards, you'll hear about the inspirational story of one of basketball's premier point guards, Steve Nash. Steve Nash has had a storied career playing in the National Basketball Association. In this short audiobook, we will learn about how Steve became the storied point guard that he is today. Starting first with his childhood and early life, we'll learn about Steve prior to entering the NBA, his time in the NBA, along with his impact on the communities of the Phoenix Suns and the Los Angeles Lakers. Regardless of how Steve Nash's career will end, he will go down in the NBA records as one of the greatest point guards to ever play the game, among the other greats like John Stockton, Jason Kidd, and Gary Payton. Former commissioner David Stern perhaps said it best at the award ceremony for Steve's Most Valuable Player award when he stated, “You demonstrate the best of our sport, a passion for our game, a commitment to your community, and an engagement with our fans. What more could we say?”

Here is a preview of what is inside this book:

What listeners say about Steve Nash

I tried to persevere with this but had to stop as the narration, which is computerised, is just dreadful. shame as the story itself is one worth hearing. hopefully we'll get a better version in future.

The greatest book about Steve Nash