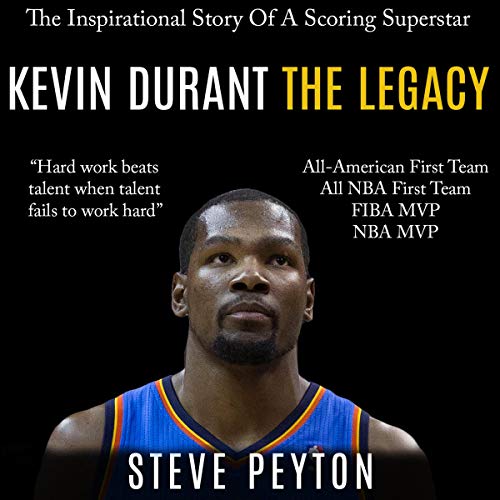 Kevin Durant: The Inspirational Story of a Scoring Superstar

Thrill to This Story of Adversity, Determination, and Triumph!

Are you a Kevin Durant fan? Do you want to know how he became a superstar? Would you like to emulate his humility and work ethic - and be a champion in your own life?

If so, Kevin Durant: The Inspirational Story of a Scoring Superstar: Kevin Durant: The Legacy is the book for you! You’ll discover how Kevin grew up, the influences his parents and grandparents had on his character, and how he became such a fierce and versatile competitor. You’ll follow him through his high school, college, and professional basketball careers. You’ll even learn the details of his basic training regimen!

Listen to this life-changing book right away!

Do you want to be a “beast” on the court like Kevin Durant? Would you like to know how he trains?

With the help of trainer Dwight Daub, Kevin focuses on the strength and agility training he needs as an NBA forward. This book describes the details of Kevin’s strength training exercises, shooting drills, corrective exercises, dribbling practice, and ball handling techniques. With Kevin’s methods, you can become stronger, sharper, and more aware - both on and off the court!

How has Kevin Durant changed the game of basketball? What is his legacy?

As a youth, Kevin was inspired by his favorite player, Vince Carter. Today, he has inspired many young people and fans of the game. He changed history by becoming a record-breaking forward and making plays at both ends of the court. Off the court, Kevin has reached at-risk youth through his charity foundation. Mature beyond his years, Kevin has made a huge impact on his teammates, fans, and others and loves to share his favorite quote: “Hard work beats talent when talent fails to work hard.”

This book includes an extensive list of Kevin’s many awards and accomplishments!

Don’t wait another minute. Listen to Kevin Durant: The Inspirational Story Of A Scoring Superstar and learn his inspirational story TODAY!

You’ll be so glad you did!

What listeners say about Kevin Durant: The Inspirational Story of a Scoring Superstar

It was amazing for me to learn more about Kevin Durant. As the title says it is quite inspirational and Kevin Durant is The Best basketball player. I found that I learned a lot from his story and how to be and think in order to achieve some of my own seemingly insurmountable goals. Outstanding..

This was a great listen on the life and career of Kevin Durant. I learned a lot about his early life and development of his career as a famed basketball player,

This all in one book has it all, from his starting career in the NBA to each year's accomplishments For those who really love this player, and want to learn more for whatever reason. I think this motivational story will inspire us all.

The man who has achieved sacred baskets.

This book was a nice addition to my basketball interest. This is a great book. This book was very insightful for me,

This book was very insightful for me, It featured a lot of amazing lessons from what Kevin Durant’s workout routine is to life lessons and philosophies that he follows.

This book takes you to the mind of the man who has made sacred baskets in decisive matches.

This book is well thought out and formatted which makes it easy to listen and enjoyable. I would recommend this book to every fan and of course people out there who need to know more about Kevin Durant. Would recommend.

Inspirational book strive to climb higher for a goal! The life, career and many achievements of Kevin Durant I found very inspiring and worthy of praise.

Glad to listen this book

Glad I have this in the collection. Great basketball player. Great story love it a lot. Recommended to all who loves basketball.

In this book, you'll learn about Kevin's incredible story to the NBA. Kevin Durant has had an incredible basketball career playing in the National Basketball Association.

In this book, you'll learn about Kevin's incredible story to the NBA. Kevin Durant has had an incredible basketball career playing in the National Basketball Association.

"Presents the athletic biography of Kevin Durant, including his career as a high school, college, and professional basketball player"--Provided by publisher.

KD is a powerful, moving biography of a modern-day legend and an essential read for all sports fans—or anyone who wants to know: what’s it like to shoot for greatness?

In this breakthrough work of reportage, star NBA reporter Ethan Sherwood Strauss investigates the team's culture, its financial ambitions and struggles, and the toll that being a super-team can take.

The motivational story of Kevin Durant is one that we can all learn a lot from, and this book aims to educate you as best as possible on everything Durant! Here Is What You'll Learn About Inside