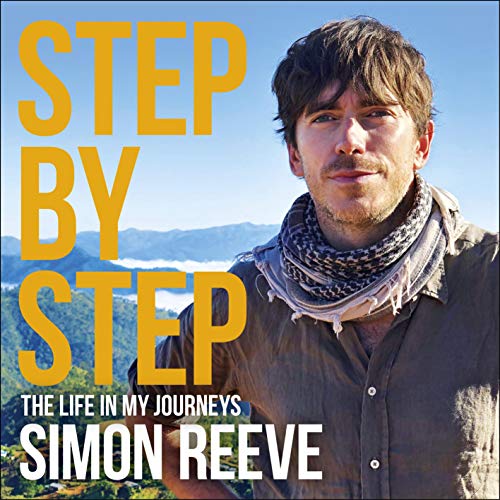 The Life in My Journeys
By: Simon Reeve
Narrated by: Simon Reeve
Length: 10 hrs and 26 mins
Categories: Biographies & Memoirs, Adventurers, Explorers & Survival
4.5 out of 5 stars 4.7 (981 ratings)

The inspiring memoir from TV traveller Simon Reeve's life of amazing adventures in over 120 countries and the most remote and extreme corners of the planet.

TV documentary maker Simon Reeve has dodged bullets on frontlines, hunted with the Bushmen of the Kalahari, dived with manta rays, seals and sharks, survived malaria, walked through minefields, tracked lions on foot, been taught to fish by the President of Moldova, and detained for spying by the KGB. After a decade spent making more than 80 programmes he has become a familiar face on British TV, well known for his extraordinary journeys across jungles, deserts, mountains and oceans, and to some of the most beautiful, dangerous and remote regions of the world. But what most people don't know is that Simon's own journey started in a rough area of Acton, West London where he was brought up and left school with no qualifications. For the first time he will tell his life story with an audiobook rich in anecdotes to entertain and inform listeners about some of the most fascinating (and often dangerous) places in the world and what it took to reach them.

Meet the author and narrator of Step by Step
0:00

What listeners say about Step by Step

I have literally been avoiding my family so I can hide away and find out more about Simon’s adventures. I now have a really bad case of itchy feet and think my next holiday might be somewhere really weird. Well written, entertaining and interesting!

I have always enjoyed the authors travel documentaries , he focuses on the people and the positives in where ever he is in the world . This book has shed so much more light on the positives, I have learnt so much about the world by listening to him narrating his own story, a brilliant listen

Simon is excellent both as an author and narrator. production quality was let down in the end by last 2 chapters marred by what sounds like persistent doorbells! Maddening and spoils what is an excellent listen, hope audible fixes this soon

Such an interesting guy!

Excellently narrated, fascinating to listen to.

I have nine words remaining to type here. bye.

There is more to Simon Reeves than I imagined

I have seen Simon Reeve on the TV doing his adventure travel shows. I, too, like to journey to exciting and exotic places in the world and have been to some of the places that Simon has depicted in his TV series including Central Africa; I can relate to Simon's experiences in the DRC having visited in the early 1990s and again in the early 2000s, and Central Asia (his show inspired me to visit Uzbekistan, an experience I will never forget). Simon, of course, is able to access many places that are off bounds to normal travellers due to his BBC affiliation and this results in some amazing television that has inspired me to seek out some of the most remote and unvisited places on Earth and this has been highly rewarding.
I was keen to listen to his story, not actually knowing much about his life other than the travel shows. I wasn't expecting his back story to be that special if I'm honest. I imagined a travel journalist who had got into television as a result. His story is incredible. From a directionless teenager who dabbled in petty crime, Simon eventually became a "post boy" at the Sunday Times working his way up to investigative news reporter during the Andrew Neil days. He left in his late 20s to write a book about Bin Laden / Al Qaeda following on from a story he had helped write about the February 1993 World Trade Centre attack. His book was not a success initially but when the 2001 World Trade Centre attacks happened, Simon was the only person in the world who had written a book about Al Qaeda and even met some of the key figures who he had spoken to when researching his book. He tells this story modestly and incredulously as events unfolded and he became the most sort after journalist in the World. This all makes fascinating reading. As does the rest of the book on his adventure travels. I was a fan of Simon Reeve before this book, I am even more of a fan now. Excellent.

Straight, honest, warm, insightful, exuberant - what a brilliant book this is! It’s read by Simon Reeve himself, his voice so familiar from all his excellent investigative adventure travel television programmes.

A memoir as well as a travelogue, Step by Step presents his childhood in Acton which was not one you’d expect a courageous traveller to emerge from. School was nothing much and he left without qualifications; his adolescence was deeply troubled and some of his acts of vandalism and out of control behaviour are truly shocking; dogged by depression he came within moments of suicide. I feel for both adolescent Simon but also for his parents who must have suffered years of worry. It was the therapist who told him to take his life ‘step by step’, advice he took to heart.

It was a chain of luck and pluck that got him onto the Sunday Times as a post boy and from there he started writing travel articles. At last absorbed by a passionate interest, he researched the bombs used in the attack on the World Trade Centre in 1993 and wrote the prophetic The New Jackals. After 9/11 and he was feted as the world specialist on Islamic terrorism and The New Jackals which had all but disappeared became New York best seller. Never in his wildest dreams as he drove round Acton in his granny’s adapted car (apart from his BMX bike his only childhood adventures) could Simon have imagined such a life path!

His brilliant travel adventures – ‘adventures with purpose’ he calls them – followed. His engaging amazement and wonderment never leaves him as he travels world wide – not merely observing but getting right in with the people (often requiring sharing prodigious amounts of local alcohol and food. Fancy barbecued rat?) to learn what life is really like. Abject poverty (Somalia, the ‘Stans’) and ruination of the environment (the draining of the Aral Sea) can leave him in tears of despair and sorrow as he draws the listener into places where most people will probably never go. He’s faced terrifying dangers (a stand-off in Mogadishu between his minders and a local gang, both groups armed with anti-aircraft guns).

Above all Simon is totally unpretentious and hugely generous in his investigations, his empathy and zeal, his determination to learn and experience more and more bursting from him and never failing to bind the listener. Even his camera crew are repeatedly appreciated for their work lugging camera equipment as heavy as a fat Labrador through rough terrain, sweltering heat or bitter cold.

Great narration but would have liked more on his travels than upbringing. Still recommendable

Simon Reeve has a winning manner on TV, able to empathise with those he meets and to draw out their stories. In this autobiography, he employs the same winning manner to let the reader into his own life journey. There are wonderful behind the scene tales told from his TV adventures, but most powerful is his journey from lost teenager to man with a purpose.

Entertaining from beginning to end I feel like a Simon is a true friends now . I've watched a few of his tv travel shows but i'm going to watch the rest of them now.