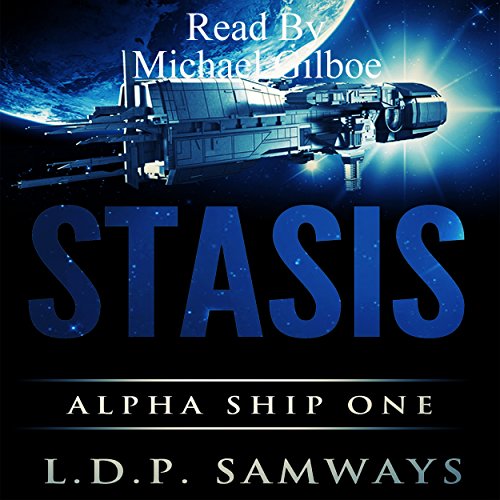 They say that in space no one can hear you scream, but the question is: Can they see you coming?

The Alpha Ship One crew are famous for two things: making Earth heaps of money and doing it under the cover of deep space. The mercenary ship is commissioned to run missions on dangerous planets, to reap great rewards from unsuspecting alien races and to take minerals, precious metals, and invaluable resources for Earth's galactic expansion.

They do the work that no other ship in Earth's fleet would dare consider. Why? Because if they get found out, then Earth abandons them; leaves them to rot in the middle of the universe, unaided and unheard of until the very end of time itself.

For Captain Flynn, he never imagined that day would come. He and his crew were more than happy with the way things were going. That's until one day they wake up from stasis not knowing how they got there. One minute they're back on Earth, relaxing after another hair-raising, highly-illegal mission, and the next, they're waking up from a six-year slumber, in the middle of a galaxy they don't recognize.

But not all is as it seems. They are not alone. Aliens are aboard their ship. And unfortunately for Captain Flynn and his rag-tag group, they don't come in peace. Earth has sold them down the river; banished them from the blue planet with no return ticket home. Now the aliens have them. And they plan on using them against their enemies.

They take them prisoner on their home planet. Shackled and bound, the crew fear that their fates are sealed. But unfortunately, it is just the beginning for them. The aliens that hold them captive have far greater plans for them than death. Plans that will undoubtedly shake Earth to its molten core.

Prepare yourself for a journey that leaps from star system to star system, in a space opera filled to the brim with nail-biting suspense throughout.

Warning: This book contains some strong language and violence. Listener discretion is advised.

More of a psychological thriller than a sci fi

The characters were interesting and had great development. Their back story and that of their past missions seemed like it would have made a more interesting story. Good narration if a bit monotone at times. The plot twist seemed to grow more ridiculous towards the end. 15 million spaceships all take of from one planet? Even Star Wars didn't get into the millions for space craft. Just wasn't my cup of tea as far as sci fi goes. I received this audiobook from the author narrator or publisher for free via audiobookblast free of charge in exchange for an unbiased review

Where does Stasis rank among all the audiobooks you’ve listened to so far?

The science in it was fun to me, especially how fast the ship was able to go. I just found it enjoyable, like an evening comedy after a long day at work

Banished from Earth, the team of Alpha ship one awake from stasis not knowing where they are--or when. They quickly realize this and a new adventure begins.

Narration done by Michael Gilboe was really good -- the sound effects, not so much. I'm not really sure when he chose to do these between each and every chapter. They only really "worked" in chapter one and one other chapter where there was pounding in the ending scene before. Every other time it almost pulled me out of the story. My recommendation to Gilboe is to just leave the random audio notes unless the author specifically asks for them.

I read some of the reviews and people are upset about the science not being accurate. Isn't that one of the bonuses of writing in the Science Fiction genre. You can bend the rules and even break them if you give a reason why or how (you don't even have to tell the how -- just make it believable). I guess people are too stuck in the here-and-now to just enjoy a futuristic tale.

The science in it was fun to me, especially how fast the ship was able to go. I just found it enjoyable, like an evening comedy after a long day at work.

The characters were very well explained and thought out. The ones you were supposed to like you liked (but not unequivocally, he had to earn it a little). And the ones that we were supposed to hate -- earned that hate as well. The other outside forces (both the alien race and the backstory of what was going on) were also interesting to me and added a lot of depth to the book.

Overall if you are looking for a fun and fast-paced science fiction book that won't make you think too hard (or make you Google something to understand it). Stasis Alpha Ship One is the book for you. Gilboe's narration helped with the pacing and the overall enjoyableness of this.

Like this review? Check out more on my blog at BriansBookBlog DOT com

Would you try another book from L.D.P. Samways and Luis Samways and/or Michael Gilboe?

What was most disappointing about L.D.P. Samways and Luis Samways ’s story?

This book was written in the manner of manner of 1950 pulp science fiction except with crude language that seems to be in the wrong place and adds nothing to the story.

The narrator seemed a bit stiff but could have been doing his best with the material given him.

This book was provided free for a review.

I felt this book was not adding enjoyment so gave up after several chapters.

sorry but this book was just plain boring.

I struggled to finish this book. it just didn't make any sense save your money buy something else

Good start to a sci-fi adventure

After a very slow start, turned into a good solid story.


"This audiobook was provided by the author, narrator, or publisher at no cost in exchange for an unbiased review courtesy of AudiobookBlast dot com."

Had to abandon audio and switch over to KU version.
I just could not get over the horrible performance.

Would you be willing to try another book from L.D.P. Samways and Luis Samways ? Why or why not?

Who would you have cast as narrator instead of Michael Gilboe?

pick any professional VO, just because person can read does not mean they are good for VO

Do you think Stasis needs a follow-up book? Why or why not?

I have to abandon audio for kindle version at about one in five rate.
I wish Amazon would do better QC before pushing this out.