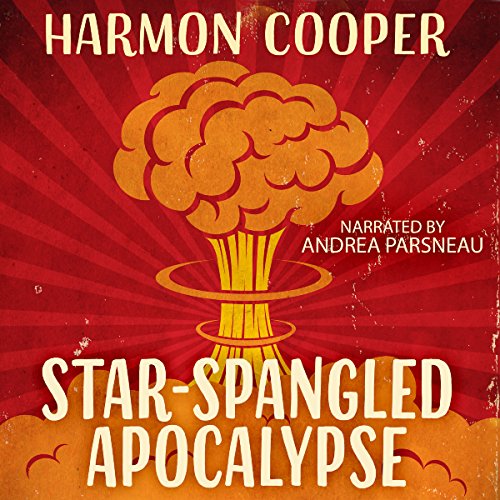 A Texan. A day-tripping yogi. A world on fire. Amazon best-selling author Harmon Cooper delivers again with this cautionary tale of friendship, addiction, paranormal encounters, and the possibility of redemption.

Narration is an art form, especially when given as a dramatic performance rather than a simple reading. Not many male narrators can reproduce convincing female voices, one notable exception being Jeff Hays, so frequently heard in Harmon Cooper's LitRPG titles. Even fewer woman can provide authentic sounding male voices and in this Andrea Parseneau, narrator of this book, is exceptional. Her whole performance is outstanding. However, throughout the entire story, this reader could not prevent the thought - why, when all of the main protagonist are male (apart from very brief appearances of Hope and very occasional odd sentences by others), in a book heavy with dialogue, is the reader female? It makes no sense. Despite the marvellous work of Ms.Parseneau, listening would have been much easier with a male narrator.

But perhaps this is another surreal joke by Mr.Cooper. Star-Spangled Apocalypse is so remeniscent of the mid 1960s, even referencing cultural aspects of the time and the obsession of so many with life's meanings. And it is a satire on society, longings, lusts and, especially, prejudice which unfortunately stays, it seems, eternal. Two barristas from opposite ends of the political spectrum, one a drunk the other a stoner, had passed work time in aimless conversation about what they would do if Armageddon came. And then it does! Or seems to, when the city in which they worked, Austin, Texas, explodes into fire. They decide to get out together and take to the road in a haze of alcohol and drugs, vaguely heading for Denver. This is their psychodylic road trip, their experiences along the journey, funny - loved the amphetamine fuelled James heading for New Mexico - and somewhat horrifying, too. Took this reader right back in time!

Apart from my ongoing reservation about the choice of narrator, I loved this book. My thanks to the author who, at my request, freely gifted me a complimentary copy. It is very different from his splendid LitRPG novels, the work of an earlier mind but no less immaginative, humourous and fun.
Recommended.

I'm glad that the cover on this novel has a mushroom cloud on it, because it literally blew me away. There are so many things that go on here that I didn't expect and had no idea that Cooper had all of this in him. Granted, he has said that this was one of his earliest novels (by the way, none of that freshman smell is on theses pages, it comes across as if crafted by a vet) but this is far afield of the writing style that the Cooper I know uses, and the commentary is so. . .so . . .yeah. I just can't find the words. He calls this a satire, but the fact it that it is something I could see playing out between two friends who are on opposite sides of the political fence. One is a stoner and the other a drunk, throw in a few aside trips and other apocalyptic pieces and you end up with this witty, biting, unrelenting tale that threatens to make you think if you aren't too careful.

Cooper is funny. I mean, fick'n funny as all get out, but the humor here is different than his other books. He isn't just being humorous, he makes observations and throw them at you with punchlines/situations. That works well, too. I hate being preached at, whether by a priest or a politician, but his commentaries don't feel like you are being talked down to, it's more like here are my thoughts and I'm happy to share it through the lens of this drunken fellow.

Another thing he does is pull Andrea Parsneau in to narrate. That's surprising, since the story basically revolves around two dudes, but, being Parsneau she manages to make you not notice that little bit at all. I didn't until it was all over. Then, all I could think of was what an amazing job she did, and her voice work just elevated the story. Who knew she could do drunk and stoned so well? Heh.

Oh, and I love the retro blast of a cover. It tells you that the book isn't serious, all the while it is, in fact, serious. The fact that the top of the cloud looks like a brain says it all. This book will blow your mind! That, is brilliant. I love it, and want a copy for my office. Now. Maybe autographed!

Anyway, I really think that Cooper was searching for something deeper when he wrote this book. I don't know if he was looking inward or at the world outside, but the vision he produces, and the thoughts he puts forth really fuel this book. I might think this was an esoteric roadtrip in his own mind as he thought about things sociological and political, or I could just see it as a running train of thought on what is happening to this country today. See, the book has layers. The deeper you dig the more that you find, and no matter where you stand on the political spectrum you will find something to laugh at and think about.

Cooper went out of his way to differentiate this book from his other sci-fi fare. Even though it is about an apocalypse it feels more real worldy than anything else of his I've ever read. I could stand to see him do a bit more of this type of a book every now and again. I can't let him get out of fantasy/sci-fi permanently but he could take us on the occasional hallucinatory road trip once in a while.

Star-Spangled Apocalypse - You'll either love it or hate it book (no in betweens). It is quirky and irrevenent the road trip of a drunk and a druggie. Funny in places, sad in places.
And most importantly a good read if you like this style of looking at the world and people.

This is a great story. And in certain situations you don't know what is real and what is fake! Andrea is such a wonderful narrator . She did an amazing job! Also loved the funny satire of the MSM.

In Texas, a massive explosion has convinced a couple of baristas that the apocalypse has arrived. The two coworkers, one a drug-fueled hippie and the other a right-wing alcoholic, flee the chaos and set off on a journey of substance abuse and confusion-filled conjecture. While I had plenty of laughs throughout this book, I can't decide how I feel about the story as there wasn't much of an actual plot. Perhaps it's meant to be a farcical take on the popular apocalyptic genre, or maybe it's just a poke at politically polarized paranoid Americans who soak themselves in drug and drink to avoid reality. Either way, it WAS funny. Andrea Parsneau  gives a fine narrative performance.

(I requested this free review copy audiobook and voluntarily posted this unbiased review.)

Crazy journey with some great characters

This is a different look from Harmon Cooper than I have experienced from his other works, and it was a totally entertaining and captivating listen. A wild road trip with friends who represent opposite points of views, and it brings forth a ton of great scenes and dialogue. It is funny, crazy and thoroughly entertaining if you give it the chance to pull you in.

Andrea Parsneau does a great job taking me on this insane ride, and brought all of the characters to life and kept me in entranced by the craziness. Every book I have heard from her has been better and better; look forward to listening to her a lot more.

If you are looking for an escape, and don't mind going into some crazy places, check this book out.

I received a copy of this audio title for free in exchange for an honest review.

I was given this free review copy audiobook at my request and have voluntarily left this review. I’m super glad I did too. This hilarious tongue in cheek drug and alcohol fueled romp through what the main characters think is the apocalypse. What happens next is fun and humorous. The characters are wild and crazy and add to the enjoyment of the story. While the story lacks what I would normally consider a plot, the journey is good enough to overcome this. The writing is great and I really enjoyed this book.

The narrator does a great job with all the characters and bringing them to life. She really added to the enjoyment of the book!

I'm a huge fan of Harmon Cooper's work and I've read or listened to most of it. I go back and forth on which of his series is my favorite, bounce back and forth depending on my mood between his Feedback Loop series (Quantum is awesome) or the Fantasy Online series (Hiccups ficking rocks!) That being said, this book is unlike anything Harmon had put out to date and if you aren't familiar with Harmon's work I don't know that I would recommend this be your first experience with him. Why? Well I must admit it's a hard book to review. A hard book to classify if I'm going to be completely honest. Satire? Sure, most definitely has satirical elements with humorous bits, though I don't think the overall focus of the book is on humor. Social commentary? Yeah, there seems to be more than a bit of that as well, love how he mocks the extreme right, though to be honest I wish he'd mocked the extreme left just as hard because IMO both extremes deserve to be mocked. A journey of self discovery? Yeah, there is that as well. I think the best way to describe the book is trippy. The book focuses on a road trip undertaken by two men who think the apocalypse is upon them after Austin is attacked by the Russians. It's a drug and alcohol infused road trip, and as I said quite trippy. Hallucinations abound. In a way it reminded me of Harmon's Life is Beautiful books, in that you really feel like you are drunk or tripping out right along with the characters. It's an impressive feat, though also a bit disturbing at times. (not actually sure if disturbing is the correct word, but it's the only word coming to me as I write this) I was definitely left thinking about the book even after I'd finished listening.

This is the first time I've heard Andrea Parsneau's work and I must say I enjoyed it quite a bit. She breathed real life into this wild cast and I'd definitely listen to more of her work.

I received a copy of this audio title for free in exchange for an honest review.