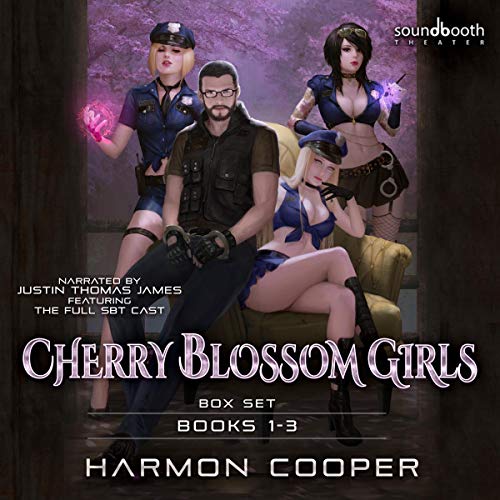 Gideon Caldwell is a less than successful indie author barely making ends meet in his crummy basement apartment in New Haven, Connecticut, when a beautiful woman mysteriously appears at his doorstep.

And also in trouble.

The mc is boring and pathetic, the only thing he does is being afraid and useless. There is to much monologuing, rambling and boring thoughts.

Cooper brings new levels of harem to a busy section of writing genre. The characters are very likeable and even the MC seems to get some muscles which is more real life than the over muscled straight machine type which I dont like.
Keep an eye out for Grace as she develops the most and of course she is on my list of most want to be real.
A great deal for an audio as well with a rapidly expanding set of stories against a probably true type of villain.
Narration is from SBT so there is always 5 stars for them as each is a master or mistress of their craft.
Again Grace voiced by Annie Ellicott stands out although Justin does a close 2nd as he develops some grit behind the Gideon character.
The narration of the sex scenes is also very well done.

Loves these books. Worth it if you are OK with LITRPG and harem, Adult fun within. :)

so I don't really know what to write here. I just finished the house of Dolls series at least up to book 4 and I was pleasantly surprised at how much I liked that book series. it was a little gritty there was some action all around good. previously I had sworn off Harmon Cooper forever because of " we could be heroes" that book is absolutely horrible. written by the same author is this book and the house of Dolls series. this book has an uninteresting unmotivated main character he makes very few decisions by himself he spends the entire book seemingly reacting. a great example would be a character from early anime tropes that gets dragged into a harem and spin to the entire anime series reacting to the harem and their shenanigans. I had high hopes because of house with dolls but this is just boring. The writing is okay the reader is okay but the story Jesus Christ the story is horrible it's just boring man I'm sorry good luck maybe this is for some people I mean a lot of people seem to like it but it's very boring.

thank god I didn't waste a credit on this.

the writing is pretty bad and the characters are horrible people. the main character doesn't give a second thought for the collateral damage he causes. I cant believe they produced 6 audio books of this trash.

I wanna know what happened and happens NOW! :-D

Fun story with interesting characters, really enjoyed it and I'll have to pick up the next couple CBG books now

really enjoyed the run and gun the main characters had to do as well as the stats, though gideon's intermonolges could get annoying I enjoyed all three books.

So glad I listened to this story

Man, this is a great story.Gideon is living a life that many men dream of. The screens with Angel in the third book had me rolling in laughter. I love listening to a book which has female narrators providing the voices of female charaters.

premise is awesome, but personally I think it could have been better, soundbooth theater as always did a great job. Couldn't get thru the 1st book even with their help.

Sit back and enjoy an incredible journey. Gideon’s harem with a wide variety of personalities help him growth in confidence while always being ‘ the weakest link’ , but also being the glue that holds this group together through good time and bad

Soundbooth did a ok job with this one but there just wasn't anything good to work with, the plot is weak, 0 world building, and since the author uses the scifi only to explain how supers exist it aged about as well as a rotting corpse, the tech is literally that of 2010, not 2040+. MC is useless and wears plot armor so thick you'd think they were hauling around depleted uranium bomb shelter.

talk about cliches and tropes

I really didn't enjoy these. I felt like the author was writing about what it was like for the process of writing the book itself. but not in a funny way to read. It was more like he was copying and pasting conversations with alpha and beta book readers then making it a part of the story. also wasn't in love with the idea of USB plugins to change stats on a whim. And did not love the voice narration