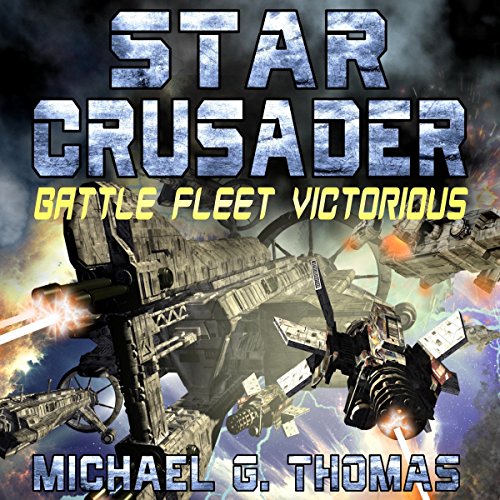 Nate and his friends undertake their greatest adventure yet, when their squadron joins Battle Fleet Victorious on a top-secret mission. The elite group of powerful ships makes up the fastest and deadliest battle fleet in the entire Alliance. They are heading deep behind enemy lines, to where the Star Empire has located an ancient and deadly weapon - one that would give them the means to defeat the Alliance in a single overwhelming battle.

As the pilots of Ironclad Squadron arrive on board the massive assault carrier, Nate discovers this is no conventional military force. Their commander is the infamous Colonel Gun, and the assault teams will be led by no other than Major Spartan, the Alliance's greatest warrior. Nate must leave the safety of the simulator video game, and use his skills to prepare the fleet's rookie pilots to provide fighter cover for the entire mission. This is Nate's greatest challenge, and the fate of the fleet, and the entire Alliance lies in his hands.

What did you love best about Star Crusader: Battle Fleet Victorious?

The whole book was great

Andrew B. Wehrlen does another great job with the narration on this story

This is the YA side of Michael Thomas's Star Crusader series. This is the first time I have heard of the series. While the book can be read as a stand alone, I would at least start in order for this part of the series. This is book 5. It took me a bit to understand exactly who was who and what was going on. Not because the story is too complex but because there are enemies and events that are referred to that are from previous books. The story is set after the Biomech War which takes place in previous stories/books from the author set in the same world.

The summery tells you the basics of the story except for the fact that it's a good, entertaining and enjoyable story. I enjoyed this book enough that I want to go back and read the series from the beginning.

This story brings together some of the best fighters/warriors from other stories in the series as they undertake a mission to save the Alliance. Action, space battles and suspense.

Kind of reminded me of Enders Game or the Insignia Series.

Andrew B. Wehrlen does another great job with the narration on this story. Pleasant voice. He has one of those voices that you can listen to for hours. Great character voices. Clearly spoken with a great pace. He's not just reading the story, he makes the characters and story come to life.

This audiobook was provided by the author, narrator or publisher at no cost in exchange for an unbiased review courtesy of AudiobookBoom dot com

Welcome back to the biotai wars. Will remind you a bit of Enders game with the young pilots. Great battle sequences. Old character return and are developed. New characters are introduced. Amazing fleet battles and fighter battles. Great narrator with a slew of voices. Can't wait for more Of the star crusader series. I received this audiobook from the author narrator or publisher for free via audiobookboom in exchange for an unbiased review

Another Good Book in the Series - YA Sci-Fi

This as another good book from the Star Crusader series. While it is obviously written for a YA audience and has mostly younger characters, most sci-fi fans will be able to appreciate it.

The books in the Star Crusader series tend to lean toward the more predictable side and the characters are generally simple and not all that complex. However, it's simplicity is one of the things I like about it... Just plain space sci-fi without all of the baggage and trimmings that you can sometimes get with much longer novels.

The narration was as good as the last several books. The narration is probably a major factor in the book getting the rating I gave it.

I received a free copy of this audiobook from the author, publisher, or narrator in exchange for an unbiased review. I was NOT required to write a positive review and this reflects my honest opinion of the work.

A good continuation of the the story.