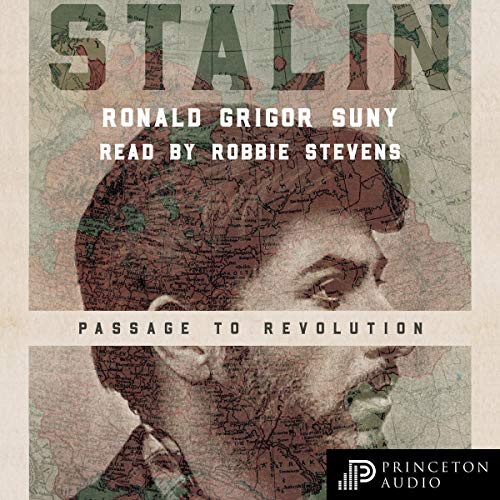 By: Ronald Grigor Suny
Narrated by: Robbie Stevens
Try for £0.00

This is the definitive biography of Joseph Stalin from his birth to the October Revolution of 1917, a panoramic and often chilling account of how an impoverished, idealistic youth from the provinces of tsarist Russia was transformed into a cunning and fearsome outlaw who would one day become one of the 20th century's most ruthless dictators.

In this monumental book, Ronald Grigor Suny sheds light on the least understood years of Stalin's career, bringing to life the turbulent world in which he lived and the extraordinary historical events that shaped him. Suny draws on a wealth of new archival evidence from Stalin's early years in the Caucasus to chart the psychological metamorphosis of the young Stalin, taking listeners from his boyhood as a Georgian nationalist and romantic poet, through his harsh years of schooling, to his commitment to violent engagement in the underground movement to topple the tsarist autocracy. Stalin emerges as an ambitious climber within the Bolshevik ranks, a resourceful leader of a small terrorist band, and a writer and thinker who was deeply engaged with some of the most incendiary debates of his time.

A landmark achievement, Stalin paints an unforgettable portrait of a driven young man who abandoned his religious faith to become a skilled political operative and a single-minded and ruthless rebel.

"A wonderful, pathbreaking book. More than anyone else, Suny has examined all the key sources, investigated all the key episodes involving Stalin directly or indirectly, and traced young Stalin's trajectory in all aspects of his life." (William Taubman, author of Khrushchev: The Man and His Era and Gorbachev: His Life and Times)

"A tremendous achievement. Suny provides the most comprehensive analysis of Stalin's early years in the Caucasus, a period crucial to his development as a revolutionary, and examines the multiple layers of experience that eventually made him into the man he was." (Stephen Jones, author of Georgia: A Political History since Independence)

"The most informed, detailed, and analytically elegant account of how Stalin was tempered." (Yuri Slezkine, author of The House of Government: A Saga of the Russian Revolution)

What listeners say about Stalin

This is an outstanding biography, analyzing the early years of one of the most sanguine leaders of the XXth century. It's based on solid research and great knowledge. lt's a must read for anyone who wants to understand how the communist party turned into the murderous apparatus that engulfed the lives of dozens of millions of people.