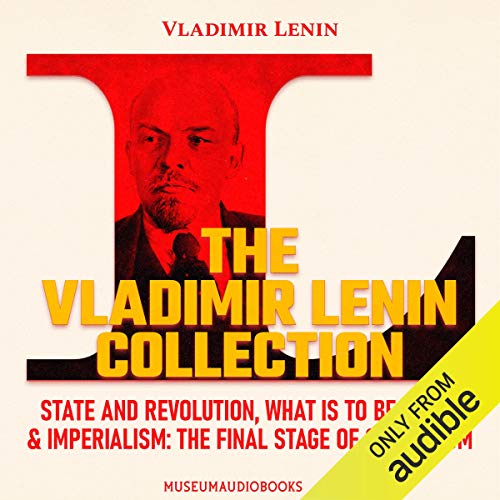 The Vladimir Lenin Collection: State and Revolution, What Is to Be Done?, & Imperialism: The Final Stage of Capitalism

By: Vladimir Lenin
Narrated by: Michael Richards
Try for £0.00

Vladimir Ilyich Ulyanov (1870-1924) is better known by his alias Lenin. A Russian revolutionary, politician, and political theorist, he served as the head of government of Soviet Russia from 1917 to 1924 and of the Soviet Union from 1922 to 1924. Under his administration, Russia became the Soviet Union, a one-party state governed by the Communist Party.

Book one: State and Revolution discusses the role of the state in society, the need for proletarian revolution, and the theoretic inability of social democracy to establish the dictatorship of the proletariat. Lenin's definition of the state is “A special organisation of force: it is an organisation of violence for the suppression of some class". Quoting Friedrich Engels and Karl Marx, Lenin investigates theoretical questions about the existence of the state after the proletarian revolution, addressing the arguments of anarchists, social democrats, and reformists. He describes the progressive stages of societal change as the revolution that establishes “the lower stage of communist society” and the “higher stage of communist society” that would yield a stable society where personal freedom might be expressed.

Book two: What Is to Be Done? (1902) is a political pamphlet in which Lenin contends that the working class will not become politically aware simply by struggling with employers over wages, hours, and working conditions. He maintains that Marxists should form a political party of committed revolutionaries to spread Marxist political ideas among the workers. The pamphlet was partly responsible for the split of the Russian Social Democratic Labor Party into Lenin's Bolsheviks and the Mensheviks. Claiming that socialist theory was the product of the "revolutionary socialist intellectuals", Lenin states that the working class was able to develop only a “trade-union consciousness". He points out that Karl Marx and Friedrich Engels, the founders of modern scientific socialism, belonged to this bourgeois intelligentsia.

Book three: "Imperialism: The Final Stage of Capitalism", a 1916 essay by Lenin, was an early attempt to account for the increasing importance of the global market in the 20th century. Lenin claims that colonialism and the First World War emerged from the worldwide spread of the capitalist economy. In the course of colonizing undeveloped countries, the great powers: the German, British, French, and Russian empires eventually engage in geopolitical conflict over the economic exploitation of large portions of the globe. Furthermore, in the capitalist homeland, the profits generated by the exploitation of colonies allow the business class to bribe native politicians, labor leaders, and the labor aristocracy in order to thwart worker revolts. The essay is a synthesis of Lenin's development of economic theories that Karl Marx formulated in Das Kapital (1867).

What listeners say about The Vladimir Lenin Collection: State and Revolution, What Is to Be Done?, & Imperialism: The Final Stage of Capitalism