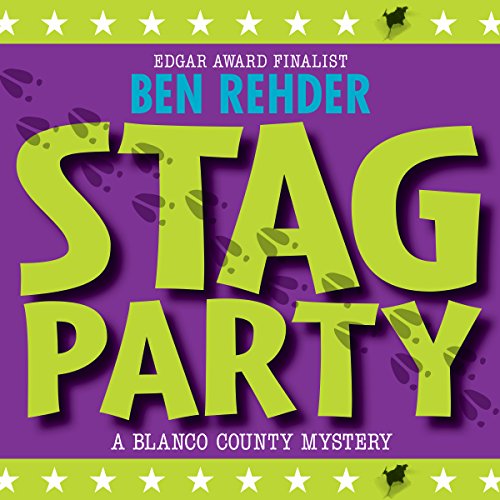 By: Ben Rehder
Narrated by: Robert King Ross
Try for £0.00

When the 102-year-old inventor of an amazing new hunting product is murdered, the clues point toward the Endicotts, a controversial reality-show family. Did one of the members do something desperate to claim the invention as their own and boost their waning popularity? Blanco County game warden John Marlin intends to find out, if he can prevent his best friend from having a deadly run-in with the prime suspect. Stag Party is the eighth novel in Ben Rehder's hilarious Blanco County mystery series.

What listeners say about Stag Party

Loved it. So far I enjoyed all books in the serie. Written and performed very well. I love how easy they are to listen to. I enjoy finding out what happens to all the main characters as the series progress.

If you want a book, with a good mystery plot and characters. Characters that will make you laugh , then this is your book.

Format: audiobook
Narrator: Robert King Ross
Another enjoyably humorous mystery in the Blanco County series.
A newly invented deer scent for hunters is the base for this story along with a redneck reality tv family.
when the 102 yr old invented is killed the sheriff and game warden Marlon have to figure out who did it and why, did someone want to get their hands on the fortune making formula for free?
Red and Billy Don are definitely the stars for me I always look forward to seeing what they’re gonna get up to.

Let's get the part started

I enjoyed this book. I think I have got use to the story jumping around from different characters (well this is he eight book in the series) because I had no problems keeping the different story lines straight, of which there was many. I liked the plot of this book especially as Red and Billy Don were running there very own investigation and with so many twists you had no idea what was going to happen. There is a lot of characters but if you have listened to the rest of the books then a lot of the characters will be familiar to you and feel like old friends. On to the next book.
After receiving the prize money for finding the winning hog (Hog heaven) Red and Billy Don decide to invest the money in a new project. A 102 year old man has invented a new scent to attract deer and he is looking for backers. When Red and Billy Don arrive to seal the deal they find him dead on his porch. Fearing the police will blame them Red starts his own investigation into his death. Red wasn't the only backer he tried and game warden John Marlin and sheriff Garza look into the the family of red necks made famous by reality tv. The family is dysfunctional but is one of them a killer? John Marlin's friend Phil Coby has his own run in with the black sheep of the family. He has nothing to do with the family business but could he be the killer? Poachers, game wardens and the police might have to work together to get the bottom of this murder.
I didn't like the narrator when he first started reading the books but as the series has gone on I have gotten use to his protrial of the characters and I quiet like him.
I was given this free review copy audiobook at my request and have voluntarily left this review.

Thanks to Ben Rehder for continuing the Blanco Co mystery series. Hilarious and engaging. The narrator however ruined the story for me. He tries unsuccessfully for a Texas drawl and it is distracting and tedious and prevented me from getting beyond the 2nd chapter. If you like Ben Rehder, you might just want to read the ones narrated by Robert King Ross.

Another crazy murder to be solved and I’m really starting to get an idea about what some of these characters will do before they even do it (it has become a game for me now). As with all the previous books in this series, I feel it can be read as a stand alone and I really enjoyed the progression this book took o solve the crimes.

Another great installment... sort of...

So, there is humor, romance, small town life and a solid murder mystery — all the things you’d expect from this series.

There are also questions of society and morality. This time, we hear about ecoterrorism, reality tv, organ donation and antisocial disorders.

Usually, the morality angle doesn’t affect my reviews... both sides get some airtime and there is a moderate resolution. This time though, it upset me. The resolution of the ecoterrorism and antisocial behavior disorder plots just doesn’t sit well with me, personally. So, if you hold any strong views on such, you might want to skip this installment and move on to the next one.

I received this audiobook for free in exchange for a fair review.

A crazy cast if characters with a good storyline that grows and grows. I love that these stories cover several sub stories within. They grow and gave a life of their own. Red and Bob Don are still scheming to get rich quick. I still feel empathy for Harley not cashing in on his invention, and some distant relative going to destroy his hard work. Seems sad. I voluntarily listened to a free copy of this and am giving an honest review. The narrator did a great job with voices and expressions bringing it to life.

Ben Rehder was born and raised in Central Texas. His love of the country and the (sometimes) colorful people is in full bloom in his book. I purchased a map of the area just to be better able to follow the action as chases and locations are often on actual roads and places. He blends in his mystery plot and twist beautifully. His mystery is fun to read and fun to listen to; one just can’t go wrong.

Not my favorite narrator. He makes some of the character sound a little washed out, and theses are colorful characters. Hopefully Mr Rehder will keep the blanco county mysteries coming!!!