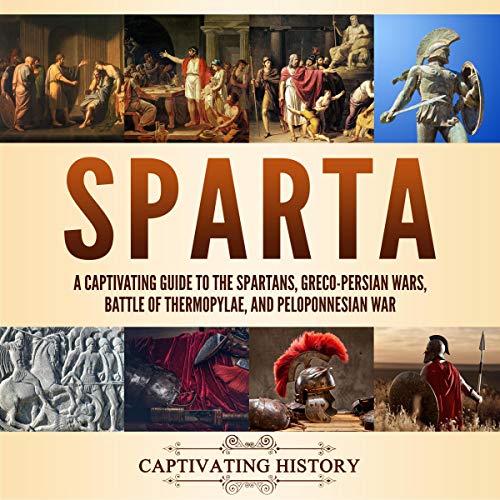 If you want to discover the captivating history of Sparta, then keep reading...

Four captivating manuscripts in this audiobook:

Some of the topics covered in part one of this audiobook include:

Some of the topics covered in part two of this audiobook include:

Some of the topics covered in part three of this audiobook include:

Some of the topics covered in part four of this audiobook include:

Get this audiobook now to learn more about Sparta!

What listeners say about Sparta

This book was a very pleasant surprise. I expected a dry, academic work. But this book turns out to be a fascinatingly detailed military account of the Persian Wars that while written in an almost journalistically readable narrative style still has virtually every paragraph footnoted with solid sources.

Like most works by professional historians, this work suffers a bit from being overly technical, but despite an excess of scholarly disputations and arguments the excitement of the narrative seldom wanes. The inspired leadership of Themistocles, the heroic valor of Leonidas and the 300 Spartans at Thermopylae, and the climactic battles of Salamis and Platea all get their due. The author ends on the note that such a monumental collective effort of courage and self-sacrifice as is exemplified by the Greek resistance to Persian aggression can only emerge in a time of great crisis and cannot be sustained for very long afterwards.

The West was not won without great courage and sacrifice. Green once wrote of devoting his retirement to translating Herodotus. At least with this book, a reader gets a good reason to want that translation or to learn ancient Greek...

The book is amazing and well-worth every penny I spent on it. Just the account of Thermopylae had me on the edge of my seat and filled with excitment and pride in what these barve 300 Spartans and their allies did for Greece and western civilization. Green's love-affair with Heroditus is quite evident and was a great use to him in this book.

This is a good, solid, and necessarily, given the nature of our sources, Athenocentric account of the Greco-Persian Wars. That is not to say Green is uncritical of the sources; far from it. In fact he constantly evaluates all of the evidence, and arrives at common sense conclusions based on a deep knowledge of the material, biases of the source informants, and no less important, Greek topography and landscape.

I found this book refreshing and validates the brilliance and fortitude of character of the ancient Greeks. This book captures the true essence of the Greek struggle against Persian aggression and demonstrates the awe-inspiring achievement of the Greeks.

Captivating History does an excellent job explaining the background of Greece and Persia which led to the Greco-Persian wars. His points of view and comments are right on the mark when he describes the generals, politicians and common soldiers that were caught up in this war.

The book is a military and political history; other aspects of Greek history are not its topic. Reading this book does require some knowledge of Greek history, since Green refers often to historical figures of other eras such as Pericles and Cimon. I recommend "The Greco-Persian Wars" as a good read for anyone interested in early Greek or Persian history.

If it's new information

If it's new information- thank goodness you're finally listening to it. If it's stuff you already know, it gives you a kick in the butt to remember it and ACT on it. Very cool guy, living a meaning life, and trying to change the world one race at a time. Yes he talks about the Spartan races- why wouldn't he? He draws many wonderful examples from them. I've loved this!

The book narrates the conflict in detail, and although at times it felt like there was a little too much speculation, the author makes clear that it is just that: speculation. Overall, the book presents a complete view of the conflict from both sides and I recommend it a lot.