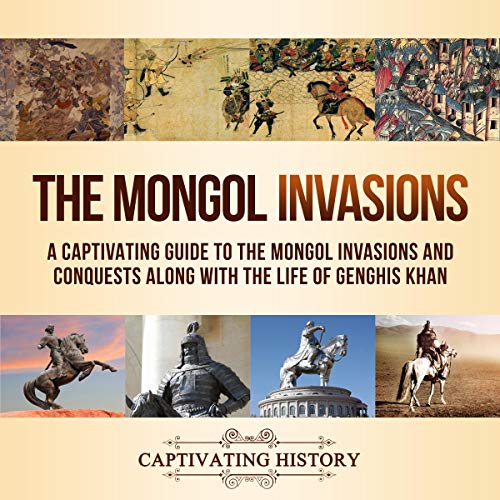 A Captivating Guide to the Mongol Invasions and Conquests along with the Life of Genghis Khan
By: Captivating History
Narrated by: Jason Zenobia
Length: 7 hrs and 37 mins
Categories: History, Ancient
4.5 out of 5 stars 4.7 (24 ratings)

If you want to discover the captivating history of the Mongol Invasions, then pay attention...

Two captivating manuscripts in one audiobook:

The Mongols were known to be both merciful as well as tolerant. Moreover, their conquests weren’t aimed against civilized life; in fact, they helped connect numerous cultures and facilitated the spread of ideas and knowledge across the continent. Diving deep inside their culture and society, we’ll cast off their barbaric image. They will be exposed for what they actually were, mere humans like any other on this Earth. Hopefully, by the end of this guide of the Mongol conquests, you will get a better understanding of not only the history of the Mongols but of all of humankind as well.

Some of the topics covered in part 1 of this audiobook include:

Some of the topics covered in part 2 of this audiobook include:

So if you want to learn more about the Mongol conquests and Genghis Khan, buy this audiobook today!

It is a brief and general history of Mongolian Empire. The content has more narrative aspect than analytical. I think the life of Genghis Khan should have been more detailed.

Information is direct and is a solid source for anyone who researches history. A great way to access the northern masters of Mongolia!

Needed just a little more detail for me since I am not an historian. I recommend this book.

I enjoyed this book for its additional information on the Mongols. I recommend this audibook.

Students will benefit from the maps and the author's ability to summarize grand events. Another plus is the author's decision to focus on timelines and geography, and avoid revisionist and DNA issues.

The book mostly focused on tactics and situations, rather than some overarching narrative. I enjoyed it.

I Was Looking For It

History We must Know

A great, informative book on the greatest land empire the world has seen. Clearly written, deeply researched, and highly informative. Every student of history, and every Soldier, should read this.

I think this is the best introduction one can have on the subject and, if he is fascinated by these people and their campaigns, he should go a step further, reading James Chambers' magnificent book

This is a short but excellent and very comprehensive account of the Mongol warriors who terrorized Asia and Europe in the 13th century.

It is fast and fun to understand -- in that regard, it reminds me of Livey or Herodotus. This is as highly recommended as an AUDIObook as I can think of. If, however, you need history presented with well-developed arguments and theory, state.

This is a unique, fact-filled audible about Mongol invasions of Europe that extended beyond the scope of this work. Glad I found it. Much better than other books seen on the topic over the years.

The thing I admired about this audiobook was the information on Genghis Khan and the Mongols' tactics, survival skills, how they practically lived on their horses. Their planning and discipline were second to none. The disadvantages to this audiobook are that you require more info on Genghis Kahn would also be nice.

Discusses a brief bio of Chingis, Ogedei, and various other characters. Here we see the first hints of unrest in the Mongol royal family.

Great historical insight.,,,,,Details the total confusion, ignorance, and stupidity in Europe at the time, in general, and in particular as to who or what the Mongols were.

Well written. Thought-provoking insights into Mongolian values/outlook and European responses to them. the story and the characters were so believable and dynamic. I enjoyed it!

Not a lot of details about weaponry or even tactics, but lots of conversation about the individual leaders on both sides. I banged this one out and now I appreciate who they were and how they affected Europe. I suggest it if you want that kind of quick survey.

Only a fluke event saved Europe from destruction at the hands of the Mongols. LISTEN to this audiobook and find out how Europe directed to remain in Europe.

the greatest Army in history......

The strength of the Mongol crowd was awesome and no one in Europe was able to stop it. Goes into great detail in explaining the chaos that was Europe in the 13th Century and how they were powerless to deal with the inevitable doom soon to be inflicted upon them.

You cannot believe the life that forged this leader into one of the greatest conquerors of all time. Suffering beyond belief. Truly an enlightening audible, masterfully acted and presented.