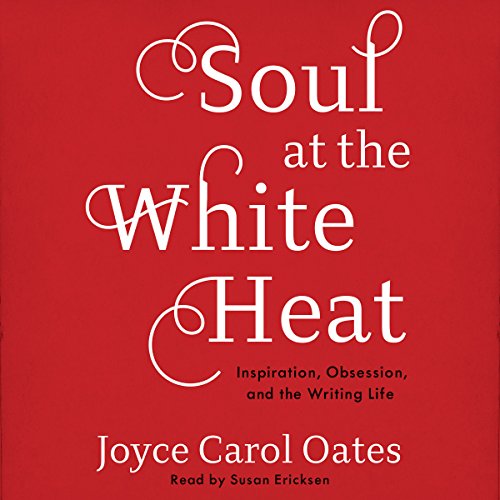 Soul at the White Heat

By: Joyce Carol Oates
Narrated by: Susan Ericksen
Try for £0.00

With this question Joyce Carol Oates, in this new collection of seminal essays and criticism, begins an imaginative exploration of the writing life and all its attendant anxieties, joys, and futilities. Leading her quest is a desire to understand the source of the writer's inspiration: Do subjects haunt those who might bring them back to life until the writer submits? Or does something "happen" to us, a sudden ignition of a burning flame? Can the appearance of a muse-like Other bring about a writer's best work?

In Soul at the White Heat, Oates deploys her keenest critical faculties, conjuring contemporary and past voices whose work she deftly and creatively dissects for clues to these elusive questions. Virginia Woolf, John Updike, Emily Dickinson, Henry James, J. M. Coetzee, Margaret Atwood, Joan Didion, Zadie Smith, and many others appear as predecessors and peers - material through which Oates sifts in acting as literary detective, philosopher, and student. The book is at its most thrilling when watching the writer herself at work, and Oates provides rare insight into her own process in candid, self-aware dispatches from the author's writing room.

Longtime admirers of Joyce Carol Oates' novels as well as her nonfiction will discover much to be inspired by and obsess upon in this inventive collection from an American master. As the New York Times has said of her essays, "Oates's writing has always seemed effortless: urgent, unafraid, torrential. She writes like a woman who walks into rough country and doesn't look back."

What listeners say about Soul at the White Heat

Where does Soul at the White Heat rank among all the audiobooks you’ve listened to so far?

Fairly low, I think, because it is so hard to listen to. I have been intrigued by the words I could catch, though. Joyce Carol Oates is a wonderful writer.

What other book might you compare Soul at the White Heat to and why?

I just listened to The Lost Landscape: A Writer's Coming of Age by the same author. I enjoyed it so much, I decided to give this book a try again. Such a disappointment.

Her style of performance does not seem to work for me. Her words flow like predictable ocean waves with no apparent connection to meaning. It feels absurd, like conversing with someone whose verbal and nonverbal communications oppose each other.

John Denver said his audiences’ suddenly began liking his concerts more after he took Pavarotti’s advice to concentrate on the meaning of each word as he sang it. Perhaps Ms. Ericksen might consider following this advice also.

This is a book I am going to have to read.