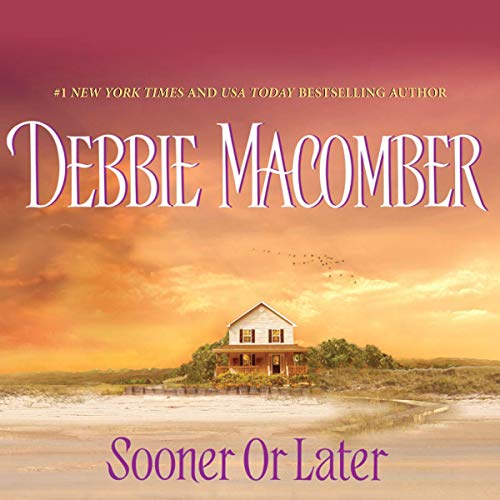 No one in the tiny town of Boothill, Texas, knows the real Shaun Murphy. Heck, most of them don’t even know his first name – and that’s the way Murphy likes it. But he can’t hide from the pretty young postmistress, Letty Madden. Letty’s brother is missing, and she knows Murphy’s the only one who can help her find him. But Murphy doesn’t need her money. And so when Letty comes to him, her begging brown eyes as dark as bittersweet chocolate, he makes her a very indecent proposal.

Letty Madden is a woman of grit and faith, a woman with a mission. She’ll do anything to get her twin brother back, even if it means giving herself to Murphy. But their rendezvous is far more passionate than they ever expected…and sooner or later, they’ll have to face the fact that they’ve fallen wildly in love.

What listeners say about Sooner or Later

This would have been a good book but I do not believe all the graphic sex was necessary. Disappointed and unexpected. I guess I was under the wrong impression of Debbie Macomber's writings.

I enjoyed Someday Soon, and was anxious to hear this next story in the series. It did not disappoint. The female lead comes off as a bit of a puritan every now and then, but all in all, the story and characters meshed well together. It kept you guessing up until the very end. Good second installment to the series.

Wow, She does it again, Another smash novel outside the box that is excellently written.

I enjoyed the story. It's a little "darker" than Debbie Macomber usually is. It has it's suspense. But I did think it ended a bit abruptly with some loose ends.

Way too graphic with the sexual material

I typically love this author but this was too sexually explicit for me. I will be more cautious when getting another book by this author.

this was a great book and I love listening to Deb's books and can't wait to start the next one.

The story line is interesting and well read. I would recommend it to a friend.

Great story!!! I absolutely loved this novel!!!
As I wrote above, I. intended to mark 5 stars however, selecting the stars can be stubborn!😁.
As usual Ms. Debbie, I was rapidly engaged in your life story!!!
I have 3 credits in my Audible Account & I’m going to look to see if you have a new trilogy! I HOPE THAT I FIND THEM ❣️
Your avid, loyal fan,
Kathleen Rizzo
❤️🙏🏼🦋

Don't waster your time or money.

Terrible story line. This really could not have been written by Debbie Macomber. Greatly disappointed.

I was so disappointed that Debbie turned to smut!

I thought I could count on Debbie's books bring clean...but this blew it for me.