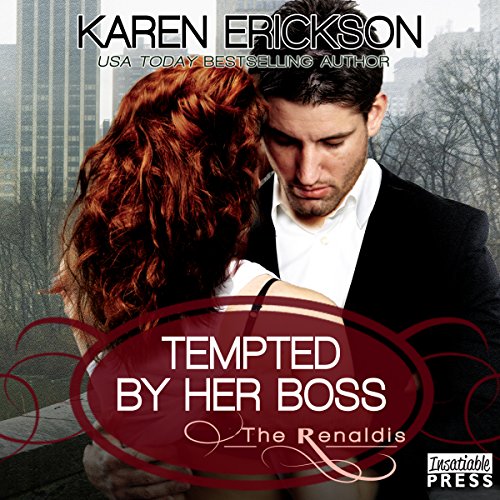 Tempted by Her Boss

Alone and broke, Paige Stewart can't believe her good luck. Who hires a virtual stranger out of a New York City coffee shop to care for their adorable grandson? Apparently Claudia Renaldi does. Widower Matteo Renaldi isn't pleased that his mother found a replacement nanny so soon after he fired the last one. Yet little Matty takes to Paige like no other nanny before. And Matteo can't deny he's quite taken with her as well. She's beautiful. Sweet. And far, far too young for him.

There's something about the gorgeously sexy Matteo that fills Paige with longing to break through his wall of formality and touch his softer side. But no one knows better than she that crushing on her boss is one thing. Acting on those feelings is forbidden. Foolish. Inevitable.

Warning: Sexy, grumpy Italian hero who is determined to keep his walls up. No matter how much his son's sweetly beautiful nanny drives him to distraction.

What listeners say about Tempted by Her Boss

I found this audiobook rather annoying in several ways. First, the heroine acts like a brainless, panting doormat most of the book. The hero is over the top stereotypical macho Italian. The narrator doing the supposed 'Italian' accent was atrocious. The story itself was a good one, ruined for me by the above mentioned items.