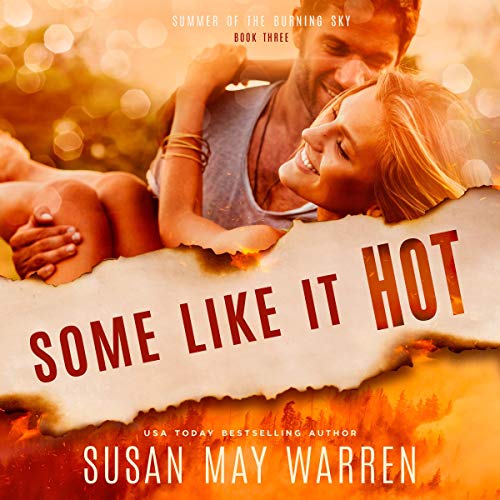 When western Alaska erupts in a devastating fire, the elite firefighting crew of the Jude County Smokejumpers is called in to save the day. They’ll do anything to stop the fire, including fighting alongside a crew of local prisoners.

The last thing they expect is a jailbreak and when the prisoners disappear into the forest with one of their own, they’ll have to fight not only the fire, but for the freedom of their friends…during the Summer of the Burning Sky.

Riley McCord is trouble, from his blue eyes to his renegade smile - a cover for the grief of losing his father three years ago in Afghanistan, a loss that is still top-secret. Riley masks it all by living large - working hard and playing hard, and that includes romancing Larke Kingston, local wilderness medic. When he’s sidelined while working the forest fire, he’s determined to rejoin his team, but to do so, he'll have to accompany Larke into the wilderness when she is dispatched to a medical emergency. What he doesn’t realize is that trouble is waiting for him in the woods....

Medic Larke Kingston lost the man she loved during her service in Afghanistan and she’s not interested in a troublemaker, so Riley’s no threat to her heart. Just a short-term distraction. Until, that is, a wilderness medical mission puts her face-to-face with an escaped prisoner. Suddenly she needs Riley more than she wants to admit.

Riley is shocked when the escapee claims to have answers about his father’s death. However, before he can uncover them, the fire turns and is bearing down on Larke’s ranch, and his team. Now, only Riley and Larke stand between the flames and destruction of everything they both love. But will the price of saving the ranch - and the team - be greater than they both can bear?

In audiobook three, the epic Summer of the Burning Sky series comes to a blazing, shocking finale.

What listeners say about Some like It Hot: Christian Romantic Suspense