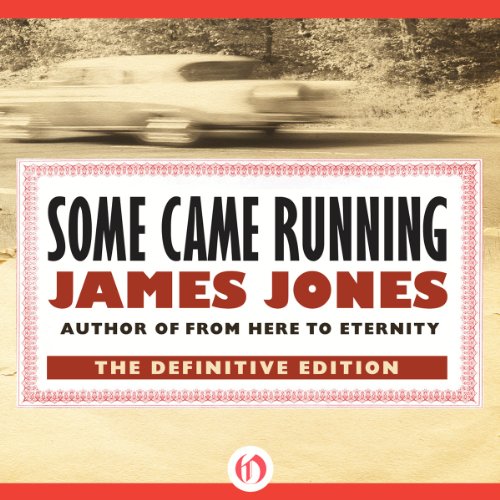 James Jones’s saga of life in the American Midwest, newly revised five decades after it was first published

After the blockbuster international success of From Here to Eternity, James Jones retreated from public life, making his home at the Handy Writers’ Colony in Illinois. His goal was to write something larger than a war novel, and the result, six years in the making, was Some Came Running, a stirring portrait of small-town life in the American Midwest at a time when our country and its people were striving to find their place in the new postwar world.

Five decades later, it has been revised and reedited under the direction of the Jones estate to allow for a leaner, tighter listen. The result is the masterpiece Jones intended: a tale whose brutal honesty is as shocking now as on the day it was first published.

What listeners say about Some Came Running

Even Dick Hill must have died of boredom reading this one. I really tried to like it, but couldn't finish it. So disappointed.

I think that the work done to edit this book is excellent and provides a smooth and cogent story especially in the audio format. Dick Hill's narration, as always, is excellent and stress relieving after a long work day. The storyline is excellent and the characters are substantially developed

I'd like to see the entirety of Jone's work converted to audio format.

The most human story,written by a very American seer. Illustrates the foibles of the ego and the hunger for love
Dick Hill is superb!

I live in the author’s hometown and have for over thirty years. This book has been debated here since its publication and even survived attempted censorship in the early days.
After all of the folklore I found myself listening rather critically for names and familiar locations. Had it not been for that personal interest I may not have endured the whole thing. The narration was incredibly loud in much of the production that caused an uncomfortable physical reaction.
Now the “redemption” in the critique.
Characters were so well developed, I sensed a kinship with them. I mourned their misfortune and celebrated each triumph as if it were real.
I must say that every character in this book is represented in each small town in this nation.
In addition, each was a part of the story. Not a single one was a filler or a “throw away”.
I will close this inadequate review thusly.
In my humble opinion the most striking character in the entire piece was Ginny Moorehead! This poor soul embodies the eternal contradiction, the hypocrisy endured by women of meager education and lack of family love and nurture.
Mr. Jones specific portrayal of her person was incredible. Her abuse at the hands of everyone that occasioned her meeting made me put this recording away over and over again. My sadness at her plight was profound and after recovery brought me back to it.
Absolutely none of this book, story or characters struck me as contrived.
I will highly recommend this book to anyone that can handle some self reflection, it will happen! As well as those that enjoy being celebratory and pathologically depressed, both in the same sitting!
P.S. Please be kind. I don’t review books because I’m not especially good at putting thoughts to print but this book drove me to it.

I never wanted the book to end!

The story was intense and the narrator read each character with incredible depth. I never wanted it to end!