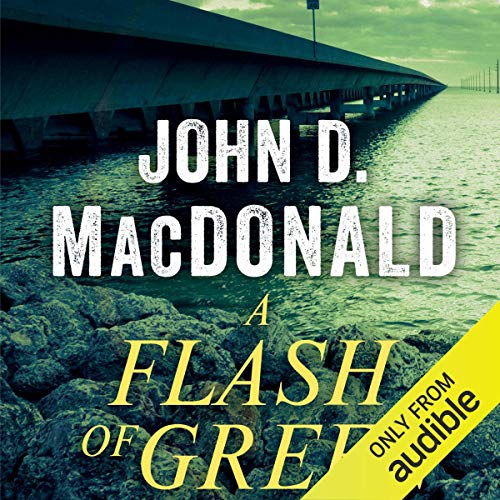 A Flash of Green

A Flash of Green

A Flash of Green tells the gripping story of small-town corruption and two people brave enough to fight back, featuring many of the themes John D. MacDonald explored better than anyone in his legendary career as a leading crime novelist. The opportunists have taken over Palm City. Silent and deadly, like the snakes that infest the nearby swamps, they lay hidden from view, waiting for the right moment to strike. Political subterfuge has already eased the residents toward selling out. All that's left now is to silence a few stubborn holdouts. James Wing is only trying to help a friend's widow. At least that's what he tells himself after warning Kat Hubble that the beautiful bay she and her neighbors have struggled to save is going to be sold to developers. He knows that he shouldn't have told her anything. He's a reporter, trained to reveal nothing. But he's falling in love with her. Now cutthroats have set their sights on Kat - and they'll do anything, use anyone, to stop her from interfering in their plans.

McDonald near his best

Wow. What a story. Numbers of flawed people.
The hint of a happier future. Winning while losing.
An amazing book, well performed.

I see now just how polemical JDM can be...

I’ve read this novel at least once, and I am a confirmed John D. MacDonald fanboy, So I was keen to hear this story via Audible, and just finished it today.

This is a good story; one of the better, and certainly one of the most ambitious, of JDM’s non-Travis McGee novels. Here, he can unleash his deserved fury at the real estate development culture that has very nearly destroyed Florida (this book is set in 1961, I think), at small-minded civic boosterism and intolerance, at how money does what money does: corrupt and entitle.

But hearing the book made me realize how overstuffed this plot is (when he brings in evangelical preachers at the 10th or 11th hour, I thought he might have jumped the shark. The is easily twice as long as his typical “pulpier” novels, and therefore feels out of character, like he’s trying to make a point (or rather several points).

Finally, I do give props to the actor for a herculean task – rendering so many characters – but the man sounds too urban and too New York (or somewhere northern) to do justice to south Florida. He’s a good narrator, but I’m not sure he was the best choice for this book.

This is my least favorite of all novels from this author. It was plodding and I really didn't care much about any of the characters especially the protagonist. It's the most forgettable book that I have listened to in a very long time.