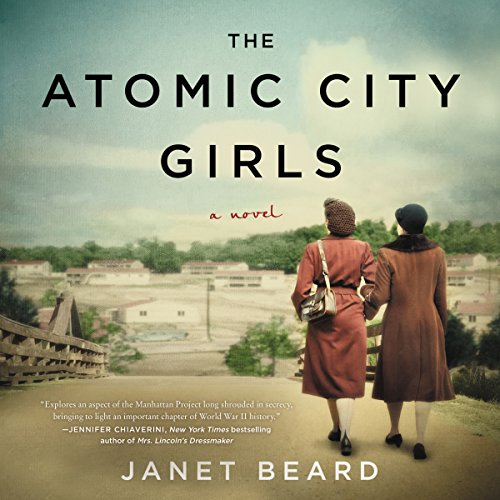 In the best-selling tradition of Hidden Figures and The Wives of Los Alamos, comes this riveting novel of the everyday people who worked on the Manhattan Project during World War II.

In November 1944, 18-year-old June Walker boards an unmarked bus, destined for a city that doesn't officially exist. Oak Ridge, Tennessee has sprung up in a matter of months - a town of trailers and segregated houses, 24-hour cafeterias, and constant security checks. There, June joins hundreds of other young girls operating massive machines whose purpose is never explained. They know they are helping to win the war, but must ask no questions and reveal nothing to outsiders.

The girls spend their evenings socializing and flirting with soldiers, scientists, and workmen at dances and movies, bowling alleys and canteens. June longs to know more about their top-secret assignment and begins an affair with Sam Cantor, the young Jewish physicist from New York who oversees the lab where she works and understands the end goal only too well, while her beautiful roommate Cici is on her own mission: to find a wealthy husband and escape her sharecropper roots. Across town, African-American construction worker Joe Brewer knows nothing of the government's plans, only that his new job pays enough to make it worth leaving his family behind, at least for now. But a breach in security will intertwine his fate with June's search for answers.

When the bombing of Hiroshima brings the truth about Oak Ridge into devastating focus, June must confront her ideals about loyalty, patriotism, and war itself.

I’m not usually a fan of historical fiction, but I really enjoyed this book. I thought the story was very well developed and I loved the characters. The narrator was a great fit, as well. Definitely recommend!

I've been so curious about the origins of Oakridge. This novel certainly helps you to imagine life in this historic city.

Really loved this book. It is very well performed. Would recommend it highly if you enjoy learning about the lives of the heros behind the war.

And to top it off, I LOVE Xe Sands! I'm always glad to find more of her work.

This book is very good, but this is the best narration I’ve ever heard for an audiobook!! Xe did amazing in her transition from male to female to narrator!
This is a great historical tale leading up to the bombings in Japan that ended WWII.

I must confess...I only “read” this book because it was my book club’s pick for this month. I was pleasantly surprised, however, as I really enjoyed the story.

I am from Knoxville so it was very fascinating listening to the story of how Oak Ridge came to be.

Love reading about history based stories. Truly loved this story about the development of the atomic bomb based on stories from the women who worked to make it happen.

The story is facinating but the sexual content is very unnecessary and caused me to return the book. I was very sad about this as I wanted to learn more about the hidden towns and such that built the bomb but I am going to start reading "The Wives of Los Alamos" instead!