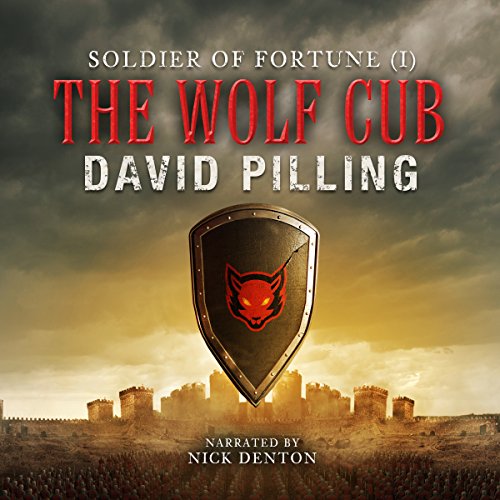 Soldier of Fortune (I): The Wolf Cub

By: David Pilling
Narrated by: Nick Denton
Try for £0.00

AD 1453. The great city of Constantinople, last remnant of the once-mighty Roman Empire, falls to the Ottoman armies of Sultan Mehmed the Conqueror.

An English knight named Sir John Page is taken prisoner by the Ottomans and forced to entertain the Sultan with tales of the West. Page chooses to tell the story of his own long career as a soldier of fortune in France, Bohemia, and the Italian city-states.

Page’s tale begins in the year of Agincourt, Henry V’s famous victory over the French. As the bastard son of Thomas Page, a famous mercenary captain known as the Half-Hanged Man or the Wolf of Burgundy, Page soon acquires the nickname of the Wolf Cub.

After slaying his cousin in a duel, Page flees his home and joins a band of outlaws in the forests of Sussex. At last - tired of the brutality of his companions - he decides to leave England and join the English army in Normandy. There he endures brutal sieges, vicious combats, torture, betrayal, and imprisonment, all to win glory and redeem his father's name.

Trapped in the Sultan’s prison, Page must hope his story is enough to save him from the executioner’s blade...at least for another three days....

What listeners say about Soldier of Fortune (I): The Wolf Cub

It is 1453 and the great city of Constantinople has fallen to the forces of Sultan Mehmet II. Sir John Page, a mercenary knight, has been captured and has been presented with a choice. Either tell the Sultan a story that pleases him or be put to death. Given this choice John Page recounts his life as a soldier of fortune.

David Pilling has clearly well researched his topic in order to produce this epic historical tale. John Page describes how he came to join Henry V in his conquest of Normandy and his eventual rise to the rank of a minor knight.

Through this tale we see a man who has the same flaws and limitations that we all have. He has just been lucky enough to be in the right place at the right time. I guess this is one of the main reasons that I like this character.

This story is further enhanced by the narration skills of Nick Denton. His ability to bring the characters to life made me feel as though I was standing alongside them and observing the scenes rather than just following the story.

The question is will the Sultan be satisfied with the story or will John Page be put to death? There is only one way to find the answer.

our hero wants all the glory fame and fortune, but spends most of the story (which IS good), shying from danger, otherwise I enjoyed the story of the English in France after agincourt. the narration was unsteady like teaching a student when to breath at a comer, and to stop at fullstops or end of paragraph before beginning the next. there was a lot of breakup in the sound which may of contributed to this.

As ever with a book by David Pilling, you get a fine blend of well-researched historical fiction and high adventure, salted with blood and humour. Sir John Page is one of Pilling's most exciting heroes to date because while he lives in history, you have no idea what the unconventional man may do next. History isn't just a background for this tale: the characterizations of King Henry V and Mehmed the Conqueror are well-drawn and believable; the battles and sieges are bloody and diseased and as far from glorious as we can get. John Page moves between these characters and these conflicts with the stumbling skill of a medieval Flashman. I'll be back for more soon when I carry on with "The Heretic".

The audible synopsis is quite comprehensive. The book basically starts after John’s mother dies, and eventually he goes off to start his career as a soldier, and ends up in France with King Henry of England’s army as they attempt to take Normandy. The story is based on a real poem written by John Page (a true person of history) that tells the tale of the campaign and its effects. The poem is referenced and quoted throughout parts of the book. The book ends with this segment of his story complete (is it enough to grant him three more days?), but it is obvious there is another book.

I listened to one other book by this narrator and he improved on this book. His female voices were more realistic. He used accents that seemed fairly natural and had individual voices for each character. I rate his performance a 4/5, but reduced that to 3 due to the editing.
I would listen to another book read by this narrator.

The editing and production of this book was poor. There were many audio mistakes in editing, especially in the last third of book. Very often we’d hear several renditions of a sentence that were recorded in an effort to get the tone correct. There were also mispronounced words. Eg. “gaoler” was pronounced “gowler” instead of “jailer”, the name Isabeau was pronounced “isaboo” instead of “isabow”. One or two mistakes can be forgiven, but the number in this book is downright sloppy.

This is the first book I’ve listened to/ read by this author.
I already have another book (Leader of Battles) lined up and now that I’m finished this one, I can’t wait to start the next.

There are no explicit sex scenes, overly descriptive violence or excessive swearing.

This was a fun tale influenced by Arabian Nights. The warrior John Page survives by telling his life story to the Turkish Sultan upon the fall of Constantinople. I don't normally read historical fiction, but enjoyed the book. It was action packed and didn't dwell or slow at any point. I look forward to the continuation of John's story.

Nick Denton did a fine job reading all the characters and elevated the work with his effort.

Rich feel of history that moves right along

Soldier of Fortune
Wolf Cub
I wish I knew more history and geography but the the story is great
The story never wains. As soon as a screen is done you’re into the next, but not so fast to overwhelm. It reads like history.
The touch of English accent sets the stage and is easy to listen to and brings a full story and characters to life

I was initially drawn to this because of the Arabian Nights parallel, and ended up finding a great new author. The story never lags and the characters are interesting. Just as important for a historical novel is the fact that everything is historically accurate. David Pilling seems to be a writer with a keen attention to detail and authenticity. This was my first novel of his, but I now own three.

I received this audiobook for free at my request from the author, publisher or narrator and have voluntarily left this review.

This story unfolds beautifully, well developed plot and great characters. There are not enough positive things to say about this book. Well worth the listen and the credit.

This book has been provided at no cost for a fair and honest review.

This is a wonderful historical fiction story that kept me entertained from beginning to end. It’s full of action that kept me listening to find out what would happen next. Nick Denton’s performance is outstanding. He does a great job with the narration, giving each character a unique voice, making it easy to follow the story. Overall, a fun, interesting listen that is very well written and beautifully told.

Where does Soldier of Fortune (I): The Wolf Cub rank among all the audiobooks you’ve listened to so far?

It wouldn't even come close to my top list. And that is perfectly fine! Not every book has to be a masterpiece for you to enjoy it.

I feel like the author needed to go into more detail at certain points of the story to give it more life.

Perfectly cast is how I would describe his performance. He hits all of the accents perfectly and you really do feel like you are listening to a storyteller from this time period. Nick Denton seems to be pretty new on the audiobook scene so he's still growing as a Narrator. He lacks some of the nuances of a Reynolds or a Kramer. But he is solid and I look forward to listening to more of him in the future.

Follow Nick Denton's solid narration of John Page's life story told by him while cast into prison by the of the Sultan of Constantinople. John Page does not hold any punches in telling of the horrors of war while fighting alongside King Henry in the 1417 campaign to conquer Normandy and France.

If you want an action-packed story that goes from one event to the next with hardly any downtime this is your book. In my honest opinion, the story could have been fleshed out a little to just give it some more life. I know it seems typical of the historical fiction genre. If the author(David Pilling) fleshes out the 2nd book in the story it could easily rival some of Bernard Cornwell's work.