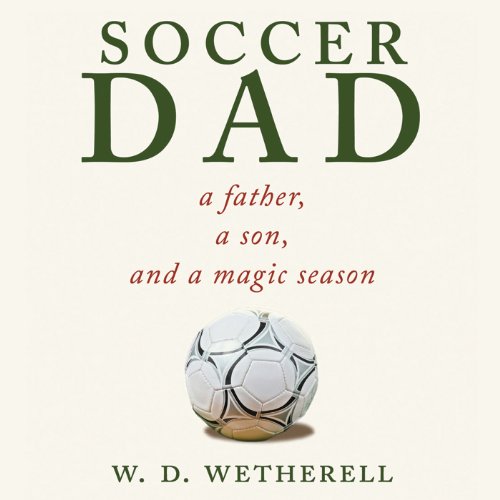 Author W. D. Wetherell brings a novelist’s eye to this nonfiction foray into the nostalgic world of high school soccer and its subculture at large.

Narrator Todd Ellis expresses the voice of a loving, thoughtful father whose son’s passion for playing soccer exposes the Ellis family to myriad new experiences and people on and off the field. Ellis has been performing audiobooks full-time for over a decade, and a listener hears his experience in how he manages to become the easygoing, paternal narrator of Soccer Dad.

Wetherell transports a listener to crisp fall days in New Hampshire where a championship varsity team strives to hold its title. Throughout the decisive season he meanders amusedly not only to tailgates, but also to ruminations on fatherhood, college sports, and homelife.

Writing with the same descriptive flair that has won his novels so much praise, W. D. Wetherell tells the true story of his high-school-age son's winning soccer season. Soccer Dad is simultaneously the candid reflections of a devoted father and the enthusiastic observations of a diehard soccer fan.

When Matt enters his senior year of high school, it is not without myriad parenting concerns on the part of his father, author W. D. Wetherell. What is his role in shaping his son's future? What will life be like when Matt is away at college? And what of Matt's soccer season? Is Matt's success in soccer just setting him up for disappointment later in life?

With the pensive eye of an artist, Wetherell follows his son's team from field to field and win to win and ruminates on topics ranging from soccer's esoteric appeal in America to the conflicting emotions of a parent sending his youngest child out into the world. Reflecting on his own experiences both as a participant and a spectator, Wetherell offers a paean to the sport of soccer and the joys of parenthood.

"Wetherell is a passionate writer who has a sharp, fresh eye." (The New York Times)